Calling the first episode of your show based on a film from the 1970s, The Original, is a bold move, and Westworld’s premier is nothing if not bold. Created by Jonathan Nolan and Lisa Joy, Westworld’s only real connection with the 70’s Yul Brenner pulp film is the setting. So welcome to Westworld, an adult theme park where you can gratify your most heroic, or villainous impulses. As one satisfied customer states during his return trip that he spent the last time being pure evil, and this is where the choice of world becomes an advantage to the show.

The Wild West is an intrinsically American place, something that is part of America’s DNA, for better, and for worse. The Western film genre holds the same place in American filmmaking, from John Ford’s ‘The Searchers’, to Clint Eastwood’s ‘Unforgiven’. The Wild West is a place where the demons of American masculinity are set free. It’s a theatre of sex and death where even the most good-hearted man will probably need to kill someone to survive, and as a whole, a piece of American iconography that has become romanticised through the passage of time. 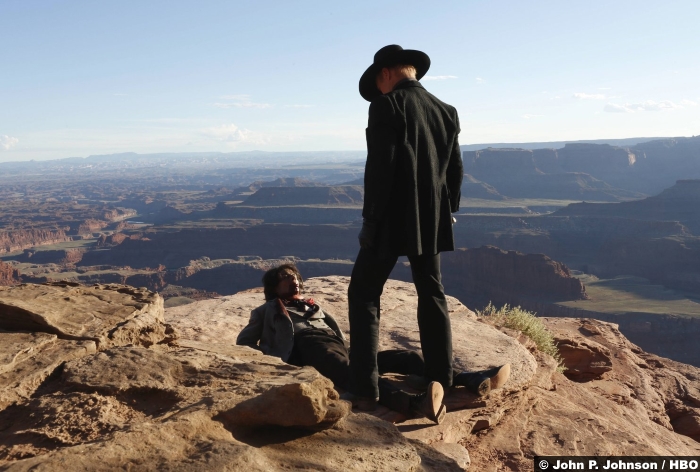 Westworld makes good use of its setting, it’s border town reminiscent of the peerless set design of Deadwood, the saloons with rye whisky, willing prostitutes, and blood soaked morality plays. But this is the veil which we must go behind to see the truth. Instead of starting in the old west we begin in a dark room with a naked woman sitting on a chair, motionless as a fly crawls along her face, and on her eye. The room is full of flickering lights, vaguely human shapes in the background, and a man asking questions. The woman is Dolores (Evan Rachel Wood), and she’s a robot.

The Original, which was written and directed by Nolan, throws the audience in the deep end by showing the different types of pleasure customers of the park can enjoy by showing it from the point of view of the robots, particularly Dolores, while also showing the behind the scenes manipulations from the robot’s creators.

At first everything seems normal: Dolores and Teddy (James Marsden) are the de-facto heroes of this story, with the murder of her family by bandits seemingly setting up a tale of revenge. But the devils in the details. Nolan plays with our expectations with the introduction of The Man in Black (Ed Harris in his best role in years). Up to this point we believe that Teddy is a customer of the theme park, playing out a white knight fantasy where he saves the damsel from the villain. Nolan manipulates us into thinking that The man in Black is this version of Yul Brunner’s villainous robot, but the scene is turned on its head in a brutal fashion that also serves as a way to tell the audience the rules of this world. Teddy is in fact another robot, his gun fire proving worthless as robots cannot hurt “visitors”, namely the parks customers. The Man in Black is human, we are seeing his villainous fantasy being played out instead of Teddy’s heroic one. This is horribly rubber stamped by Teddy’s death at his hands, and his rape of Dolores. Then the sun comes up and everything is reset. Dolores, and Teddy’s, minds are wiped to begin a new day. 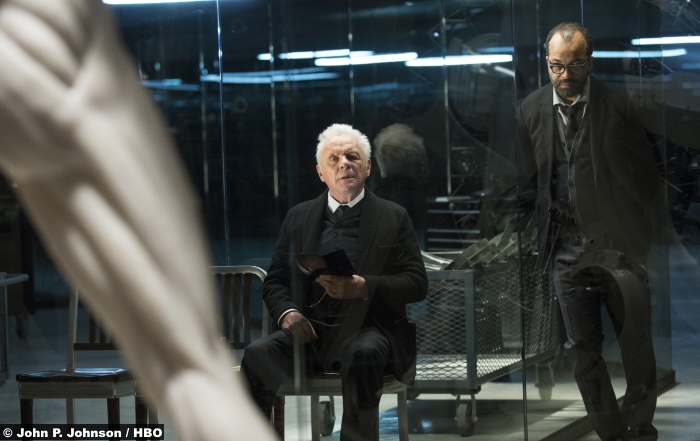 It’s when the second day begins that we finally see just how of everything is. The conversations between town’s folk have a genre appropriate feel because they are lines of a script. It’s a fiction, set up for the purposes of entertainment, where the visitors can play out fantasies without fear of morality. This is where Westworld comes into its own. For the robot’s the ghost in their machine is humanity, for us as viewers, it’s empathy. We are shown these lives, and how they can be manipulated and destroyed, for pleasure. It’s layered storytelling, not surprising since Nolan frequently collaborates with his Dark knight directing brother Christopher. Like his brothers cinematic efforts (particularly Inception) Jonathan Nolan highlights the inherent fakeness of the world. Westworld isn’t just a sci-fi western, it’s also a back stage drama. This is embodied by Jeffrey Wright as Bernard Lowe, Anthony Hopkins as Dr Ford, and Simon Quarterman, as Lee Sizemore. Wright and Hopkins play the creators, Hopkins is the parks original genius, and it’s his updates that are the source of the park’s trouble, and it’s up to Wright’s Bernard Lowe to keep him in check. Then there’s Sizemore, the writer, all of these characters are an amalgamation of Jonathan Nolan’s role as the showrunner.

It’s in the little details where The Original makes the biggest impression. It’s the anachronisms that give away the illusion: a visitor at a brothel saying that this is only level one stuff (which in itself is a neat way of assuring the viewer that the show is more than the HBO house style of tits and ass), a photograph of a woman in a modern city found by Dolores’ father, a bandit’s triumphant speech being interrupted by a paying customers shot to his head. All of these are tiny sparks that will come together and ignite Westworld in the coming episodes. 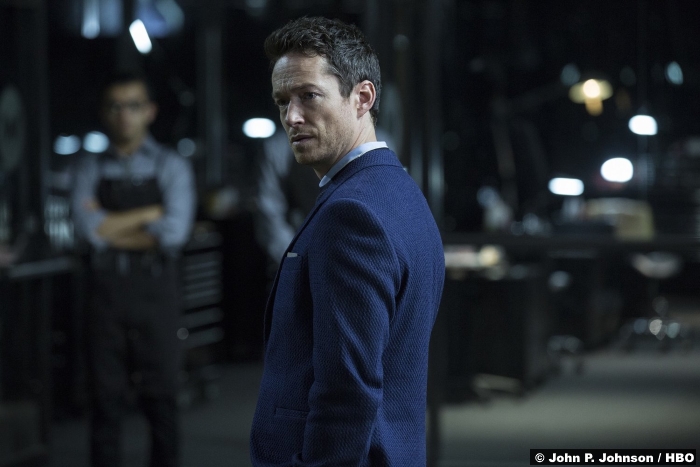 But let’s return to that fly. Again, a little detail is used to suggest so much. It turns out that Dolores is the oldest robot in the park, the original of the episodes title. Her programming is used as a basis for the others, so when she is asked if she could hurt a living thing she says no. With the creators mind put to rest she is sent back into rotation, albeit with a different father. A fly lands on her neck as she’s looking out at the new day. She kills the fly, the smallest of human gestures, but the biggest inconsistency.

8/10 – A strong start that plays with genre conventions, and audience expectations, Westworld is a superbly acted multilayered joy. HBO will be sighing with relief, they have another hit on their hands.