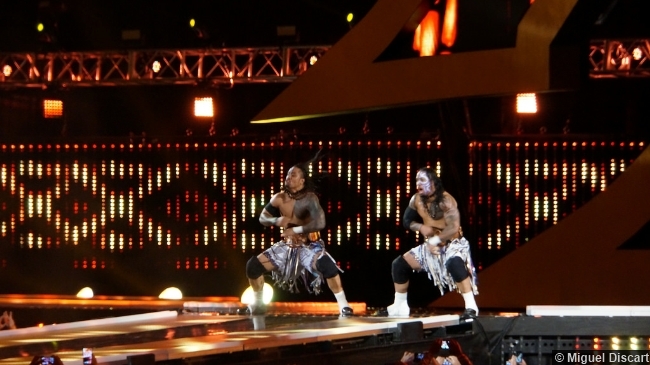 SmackDown Live kicks off with SmackDown General Manager Daniel Bryan in the ring with the SmackDown Women’s Championship prominently displayed in the ring. The GM says that, this Sunday at Backlash, six women will walk into Backlash to compete in a Women’s Six Pack Elimination Challenge with only one woman walking out as the first ever SmackDown Women’s Champion. Daniel then mentions that all six of those women will compete in a 6-Woman Tag match later tonight but, right now, they are going to have a public forum with all six women. The GM then introduces the first of six competitors in the title match this Sunday, “The Irish Lass Kicker” Becky Lynch. After making her way to the ring, Becky comments that she thought that Daniel was going to bring out Nikki Bella, Daniel’s sister-in-law, first.

The GM says that, while he loves his sister-in-law, Becky Lynch was the top female pick in the WWE Draft. After plugging Total Bellas, Daniel asks Becky what it would mean to her to be the first ever SmackDown Women’s Champion. Becky says that there is a reason that her journey has been so long, saying that everything that she has fought for has brought her to this moment as becoming the first SmackDown Women’s Champion will be the biggest moment of her life.

Natalya then interrupts, saying the worst night of her life was at the WWE Draft when she and Becky Lynch both got drafted to SmackDown Live. Becky responds, telling Natalya that she has “changed” and asking what is wrong with her. Natalya then enters the ring as Alexa Bliss comes out to the ring, calling Natalya and Becky the “real whiners of WWE” before calling Daniel Bryan a “Bella trophy husband”. Carmella then joins the discussion, toting her recent attacks on Nikki Bella. Becky then tries to stir things up by asking Alexa if she is going to let Carmella interrupt her like that. Alexa says that Carmella is the “least” of her worries, which sparks an argument between Alexa and Carmella that is later joined by Natalya. Natalya then accuses Becky of trying to turn Natalya, Alexa, and Carmella against each other, leading to a stand-off between the four women. Naomi and Nikki Bella then come out to the ring to back Becky up as a brawl breaks out between the six Superstars with Becky, Naomi, & Nikki getting the better of the fight, standing tall as Natalya, Alexa, & Carmella retreat.

Backstage, SmackDown Commissioner Shane McMahon and SmackDown General Manager Daniel Bryan are confronted by Intercontinental Champion The Miz and his wife Maryse as The Miz expresses his unhappiness with having to defend the Intercontinental Title against a “loser” like Dolph Ziggler at Backlash. The Miz then says that Daniel just can’t get over what he said to the GM on Talking Smack two weeks ago. The GM responds by saying that The Miz refers to Dolph as a “loser”, but when Dolph wanted to fight last week, it was The Miz who walked away, leading to Daniel asking Miz, “what does that make you?” The GM then says that, whether The Miz wants to have the match or not, he is going to have the match and, if he has a problem with that, then The Miz can just hand over the Intercontinental Title right now. Faced with those options, The Miz decides to go out to the ring for his scheduled match.

Before he defends the Intercontinental Championship against Dolph Ziggler this Sunday at Backlash, Intercontinental Champion The Miz, with Maryse in his corner, would go one-on-one with the Superstar he faced at SummerSlam, Apollo Crews, in a non-title rematch with Dolph Ziggler a guest on commentary. During the match, Apollo Crews would send The Miz to the outside and the Intercontinental Champion would take this opportunity to get in the face of his Backlash opponent, shoving Dolph Ziggler, prompting to a face-off between the two that is interrupted by Apollo Crews, who The Miz shoves into Dolph, knocking Dolph down. The Miz then sends Crews shoulder-first into the ring post before bringing Apollo in the ring, planting Crews with the Skull Crushing Finale, pinning Apollo to pick up the win. After the match, Dolph rushes in the ring, but The Miz makes a quick exit, leaving his Intercontinental Title belt behind. “The Show Off” grabs the title belt and lays it in the ring, using the title to try and lure The Miz back into the ring. However, the champion sends Maryse into the ring as The Miz’s wife grabs the title belt and leaves the ring with the title as Dolph shouts at The Miz, calling the champion a “coward”.

With a match against Randy Orton coming up this Sunday at Backlash, Bray Wyatt makes an appearance from his undisclosed location as “The Eater of Worlds” says that, over time, mankind learned to “adapt” and, sooner or later, the once great “predators” of the world would become “playthings”. Bray then says that history repeats itself, saying that Randy Orton is not the great predator that he once was and that he is the “evolution of man” and he is a “god”. Wyatt continues, saying that the “weapon” that he wields is something that Orton will learn to fear and, at Backlash, the predator will become “prey” and all that will be left of Orton will be “chunks of meat” stuck to the teeth of “The Eater of Worlds”.

Before they compete in a Women’s Six Pack Elimination Challenge to crown the first ever SmackDown Women’s Champion at Backlash, the six competitors looking to become the top woman on SmackDown Live would be in action as “The Irish Lass Kicker” Becky Lynch would team with Naomi and Nikki Bella to face the team of Natalya, Alexa Bliss, & Carmella in a 6-Woman Tag match. At the end of a wild match, it was Carmella locking in the Code of Silence on the surgically repaired neck of Nikki Bella, making Nikki tap out to pick up the win for her team.

After the match, The Usos would re-enter the ring, reluctantly extending their hands to American Alpha and American Alpha would fall for the ploy again as the twins use this opportunity to attack Chad Gable & Jason Jordan with The Usos sending Jordan shoulder-first into the ring post. The Usos then isolate Chad Gable as The Usos assault the left leg of Gable before one of The Usos holds Gable in place while the other Uso comes off of the top rope with a Samoan Splash to the left leg! Referees and the ringside doctor then rush into the ring to join Jason Jordan in checking on Chad Gable as The Usos leave the ring, showing no remorse for their attack.

After the dancing of a chosen woman in the crowd did not meet his expectations, Fandango would ask for someone with some “fire” in their belly. However, Fandango would get more than he could handle in that department as Kane comes out to the ring. “The Big Red Machine” was not looking to dance though as Kane grabs Fandango, drilling the dancing Superstar with a chokeslam. Kane then does a little Fandangoing before exiting the ring.

With American Alpha already making it to the Finals earlier in the night, the second Semi-Final match of the SmackDown Tag Team Championship Tournament would take place on SmackDown Live as The Hype Bros would face Heath Slater & Rhyno. In the end, it was Rhyno blasting Zack Ryder with the Gore, pinning Ryder to pick up the win for himself and Heath Slater as Heath Slater & Rhyno advance to the Finals to face American Alpha with the winning team being crowned the first ever SmackDown Tag Team Champions!

Then it was time for the face-to-face confrontation between Dean Ambrose and AJ Styles as WWE World Champion Dean Ambrose would make his way to the ring followed by the #1 Contender for the WWE World Championship and the self-proclaimed “Face That Runs The Place” AJ Styles. After asking interviewer Charly Caruso to exit the ring for her own safety, Dean Ambrose says that, since AJ Styles likes “trophies” so much, he brought AJ a gift. The champion then hands Styles a “participation trophy” for bowling, telling the challenger that it’s the “only trophy” that AJ is ever going to get from him. The challenger tells Ambrose that the champion has no idea who he’s dealing with. Ambrose responds by making fun of Styles for getting crotched on the top rope last week before saying that he doesn’t want Ambrose to hand him anything. AJ then says that he is going to beat Ambrose at Backlash just like he beat John Cena at SummerSlam, saying that Cena took him seriously and he beat Cena clean in the ring before saying that Ambrose is not John Cena.

The champion responds by saying that the first time they had a match, he beat Styles and he’s going to do it again this Sunday. Ambrose then says that AJ better appreciate the bowling trophy because, in WWE, they don’t give trophies to the “face that came in second place”! AJ responds to this by kicking the champion below the belt with a blatant low blow! Styles then shatters the bowling trophy, letting Ambrose know in no uncertain terms that there is only one prize that he’s interested in and that’s the WWE World Championship.