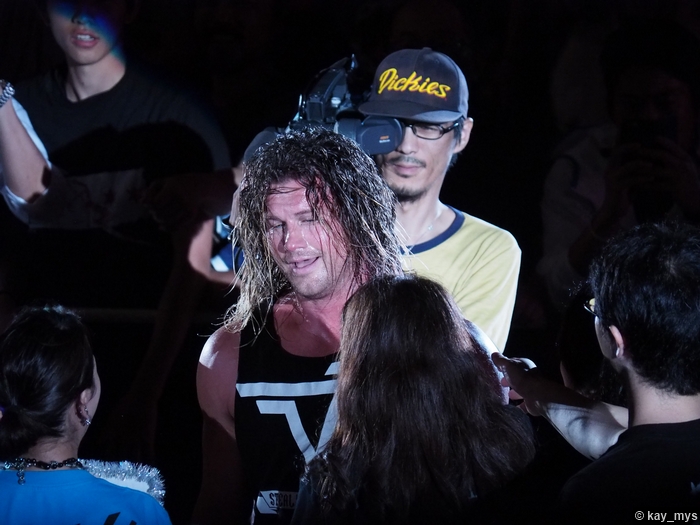 After defeating Bray Wyatt’s follower Erick Rowan last week and receiving another eerie message from Bray Wyatt, SmackDown Live would kick off with “The Viper” Randy Orton. Orton says that he knows why Bray Wyatt attacks people from behind, saying that Bray himself is “afraid” before saying there’s no shame in being afraid. “The Viper” then says that he knows that Bray is afraid of him before calling Bray Wyatt out to face him in the ring. However, Bray Wyatt opts not to come to the ring, appearing on the big screen as “The Eater of Worlds” says that, unlike the Hansel & Gretel fairy tale, he has left behind his very own “trail of bread crumbs”, but his trail will not lead Orton home. Wyatt then says that, in this world, he is a “god” and he makes the rules, saying that, if Orton wants to hurt him, he better hurry because the “sands of time” do not wait for any “mortal man”. Bray then demonically sings “He’s Got The Whole World in His Hands”, laughing before the screen goes black. “The Viper” wastes no time taking Bray up on his offer as Randy Orton exits the ring, heading to the back to search for Bray Wyatt.

Before they defend the SmackDown Tag Team Titles against The Usos in just under two weeks at No Mercy, SmackDown Tag Team Champions Heath Slater & Rhyno would join forces with American Alpha to face the team of The Usos and The Ascension in 8-Man Tag action. During the match, The Usos would isolate Heath Slater, again stomping the left knee of Slater before Jimmy Uso locks in the Tequila Sunrise on Slater, torqueing the knee, leaving Heath no choice but to tap out as The Usos and The Ascension pick up the win.

Backstage, Randy Orton enters a dark room, searching for Bray Wyatt, but “The Viper” finds a strange pickaxe hanging on the wall, deciding to turn the tool in a different direction. With Bray Wyatt nowhere to be found, Orton decides to exit the room as the pickaxe is shown back in its original position as Erick Rowan emerges from the darkness, glaring at the door Orton exited through.

Backstage, the hunt continues as Randy Orton enters a room with two doors, one door is marked “I am a god” while the other reads “Predator or prey”. Orton chooses the “I am a god” door and, inside, he finds a cardboard cutout of himself with the eyes whited out and the word “prey” written on it. Orton then goes to the “Predator or prey” door, slowly opening the door and peering inside as Erick Rowan is shown standing in the room just out of sight of “The Viper”. Orton responds by shutting the door and walking away as the locked door handle jiggles as it appears as though Rowan was locked in the room.

The Miz then points out the parents of Dolph Ziggler, a fellow Cleveland native, in the crowd, saying that Dolph’s parents raised a “world class elite level loser”. This brings out Dolph Ziggler, who tells The Miz that, if The Miz has something to say to him, then he can say it to his face. The Intercontinental Champion responds by saying that he has defeated Dolph several times with Dolph saying that “cheated” the last two times they faced each other, telling The Miz to enjoy his “tainted” title reign. The Miz argues that the record books won’t mention that he cheated, saying that the record books will say that Ziggler used to be great, but now all he does is “lose”. The Miz continues, saying that Dolph was so close to the main event, but now he is stuck in the “mid-level”, adding that Dolph’s career makes him “sick”.

The Intercontinental Champion then says that he would be “embarrassed” if his career was like Dolph’s has been before saying that Ziggler, his parents, his friends, and his city should all be embarrassed before saying that Ziggler has “nothing that matters”. The Miz then says that the ring and the fans may matter to Dolph Ziggler, but Dolph has nothing else and, unless Ziggler wants to give up his career, he’s got nothing more to say to him. The Miz and Maryse then exit the ring with The Miz stopping to tell Dolph’s parents, “you must be so proud” before Miz & Maryse start to walk up the ramp. Calling The Miz “Mike”, Dolph says that The Miz is right, saying that “you can give and you can give” and, sometimes, you get “nothing in return”. Ziggler then says that he has friends and fans come up to him and ask him why he still does it before an impassioned Dolph explains that he does it because he “can’t stop”, saying it’s a “sickness”. Dolph continues, saying that his career didn’t turn out the way he wanted it to but he still can’t stop himself before telling The Miz that, if The Miz puts the Intercontinental Title up one more time, then he will put up his entire career!

This brings The Miz and Maryse back to the ring as the Intercontinental Champion takes a sudden interest in what Dolph has to say, making sure that what he’s hearing is for real, saying that, when he beats Ziggler, Dolph will be out of WWE for good and it will be because of him. Dolph confirms this, declaring that he either walks out as the Intercontinental Champion or he’s “done”, saying that, either way, he will be out of his “misery”. The Miz then tells Dolph that, in two weeks at No Mercy, he will put his Intercontinental Title on the line against Ziggler’s career and, if Dolph isn’t willing to hang up his career, he will “hang it up” for him! The Miz & Maryse then leave the ring as Dolph Ziggler ponders the decision he just made.

SmackDown Women’s Champion Becky Lynch was set for action on SmackDown Live, but the champion is ambushed during her entrance by her No Mercy opponent, Alexa Bliss, as Alexa slams Becky’s face into the stage. Bliss then grabs the SmackDown Women’s Title belt, telling Becky that she doesn’t “deserve” to be the champion, she does. The #1 Contender then heads to the back, leaving the champion motionless on the stage.

Backstage, Bray Wyatt appears on the big screen again, saying that he was “wrong” about Randy Orton, saying Orton has “no venom”. Bray then says Orton is taking all of the fan out of his “game” before asking “where are you, Randy?” This is when Randy Orton would rise up behind “The Eater of Worlds” wearing Erick Rowan’s sheep mask and, when the laughing Bray Wyatt turns around to spot Orton standing behind him, “The Viper” strikes as Orton pummels Bray with right hands. However, Bray is quick to deliver a knee to Orton’s mid-section before making a quick escape as Orton laughs at Bray before sitting down and putting the sheep mask back on, singing “I’ve got the whole world in my hands”. The video then warps back and forth, distorting Orton’s voice before showing Bray Wyatt again as it becomes clear that Randy Orton is just as demented as Bray Wyatt.

Then it was time for a huge main event as, in a rematch from Backlash, AJ Styles would make his first defense of the WWE World Championship against the man he used a low blow to beat to take the title from, “The Lunatic Fringe” Dean Ambrose, with the third piece of the puzzle in the Triple Threat Match for the title at No Mercy, John Cena, a guest on commentary. During the title match, AJ Styles would work on the left leg of Dean Ambrose before locking in the Calf Crusher on “The Lunatic Fringe” with the challenger bouncing AJ’s head off of the mat to force the champion to break the hold.

Both men then work their way back to their feet, going counter-for-counter before Ambrose scores with the double underhook facebuster, but Styles kicks out. The champion then scores with a Pele Kick before Ambrose battles back, hanging Styles up on the top rope before delivering a clothesline to the champion, getting another near fall. Styles then fights back with another Pele Kick before going for the springboard 450 Splash but Ambrose moves out of the way before “The Lunatic Fringe” comes off of the top rope with his signature elbow drop to the champion with AJ just barely kicking out in time.

Ambrose then sends Styles to the outside before looking for a dive, but AJ moves and the challenger lands hard on his bad leg. The champion then scores with a knee to the face of “The Lunatic Fringe” before rolling Ambrose back into the ring. This is when AJ Styles would decide to get a cheap shot in, catching an unsuspecting John Cena with a right hand at ringside! Back in the ring, Ambrose would avoid the Phenomenal Forearm before rolling up AJ Styles, but while this is taking place, John Cena had gotten on the ring apron, trying to get in the ring to get a piece of Styles, but inadvertently distracting the referee, who tries to keep Cena from getting involved. Cena then gets off of the ring apron, but the distraction gave AJ enough time to kick out. Ambrose would then exit the ring, delivering a right hand of his own to John Cena, apparently blaming Cena for the referee being distracted! Ambrose then gets back in the ring, walking right into a roll-up by AJ Styles, who grabs the pants of the challenger for the illegal advantage, getting the three-count to successfully retain the WWE World Title.

After the match, AJ Styles is quick to exit the ring with the title belt as, in the ring, Cena and Ambrose are in each other’s face before Ambrose looks to hit Cena with Dirty Deeds, but Cena counters, hitting the Attitude Adjustment on “The Lunatic Fringe”. AJ Styles then tries to get the jump on John Cena, but Cena fights off Styles as well, hitting the WWE World Champion with the Attitude Adjustment as well! Cena then grabs the WWE World Title belt, holding the title high in what could be a sign of things to come at No Mercy as Cena looks to make history by becoming a sixteen-time World Champion.