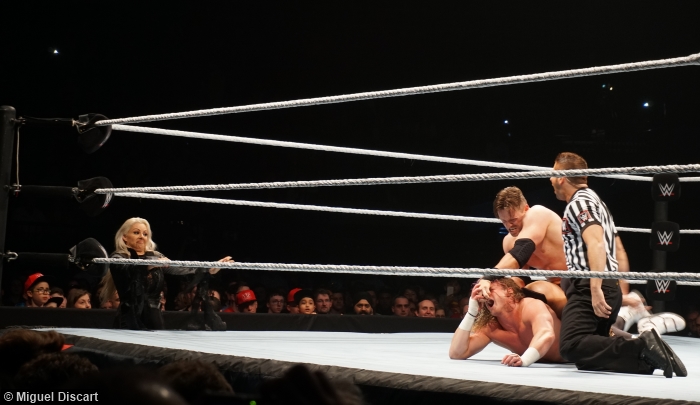 SmackDown Live kicks off with SmackDown Live General Manager Daniel Bryan in the ring to serve as the mediator for the official contract signing for the SmackDown Women’s Title match at No Mercy in just under three weeks. The GM acknowledges that contract signings typically end in chaos, but they are going to keep things “civil” tonight. Daniel then introduces the defending champion as the first SmackDown Women’s Champion in history Becky Lynch makes her way to the ring with Daniel reiterating that he wants things to stay “civil”. The GM then introduces the first ever #1 Contender for the SmackDown Women’s Championship as Alexa Bliss makes her way to the ring for the contract signing. Becky says that, while Alexa is preparing for a “pageant”, she is preparing for a “fight” with Bliss responding that Becky doesn’t “fit the role of a champion”. Alexa then says that Becky’s role in life is to be the woman that “succeeds then fails miserably”, saying that Becky was not born to be a champion, she was “born to be a loser”.

Backstage, Intercontinental Champion The Miz confronts SmackDown Live General Manager Daniel Bryan to express his disapproval over having to defend the Intercontinental Title against Dolph Ziggler tonight. The GM reveals to The Miz that, as part of his newly signed contract with SmackDown Live, The Miz agreed to the terms that The Miz himself came up with last week, stating that, in order for The Miz to keep his contract, he must defend the Intercontinental Championship. Daniel then comments that not having a contract would make it real difficult to, as The Miz put it, go out there and do what Daniel Bryan can’t do. The Miz then leaves in huff, begrudgingly accepting the terms laid out by the GM.

After The Usos heinously assaulted American Alpha’s Chad Gable a couple of weeks ago, taking American Alpha out of the Finals of the SmackDown Tag Team Championship Tournament, American Alpha would be out for revenge as Chad Gable & Jason Jordan would face The Usos on SmackDown Live with the winners becoming the #1 Contender for the SmackDown Tag Team Titles. Unsurprisingly, it would not take long for The Usos to target the injured left knee of Chad Gable as Jimmy & Jey use the weakness to take control of the match. Later on in the match, Jimmy Uso would hit the Samoan Splash on Jason Jordan and the match seemed to be over, but Chad Gable was able to break up the pin at the last second.

Jason Jordan would then go for the tag to Chad Gable, but when Jordan sees that Gable can’t even stand on his bad leg to make the tag, Jordan decides to not tag Gable in and go it alone against The Usos. Jey Uso would then chop block Chad Gable’s bad knee, knocking Gable to the floor before The Usos hit a double super kick to Jordan with Jey following it up with the Samoan Splash, pinning Jason Jordan to pick up the win. As a result, The Usos will head to No Mercy where they will challenge Heath Slater & Rhyno for the SmackDown Tag Team Titles!

Backstage, The Usos would confront SmackDown Tag Team Champions Heath Slater & Rhyno, telling the champions that they can either hand over the tag titles right now or they can take them from Slater & Rhyno at No Mercy and send Slater and his kids back to the “mud hole” they crawled out of.

After The Miz’s wife Maryse sprayed something in the eyes of Dolph Ziggler to let The Miz beat Dolph and keep the Intercontinental Title at Backlash, the rematch would take place on SmackDown Live as The Miz, with Maryse in his corner, would defend the Intercontinental Title against “The Show Off” Dolph Ziggler. Throughout the match, The Miz would repeatedly mock SmackDown Live General Manager Daniel Bryan by using some of Daniel’s signature moves. Later on in the match, Dolph Ziggler would start to build momentum against The Miz and this is when Maryse would try to get involved, looking to spray Dolph in the eyes like she did at Backlash. However, this time, the referee would spot Maryse, preventing the interference before ejecting Maryse from ringside, much to the chagrin of The Miz!

For the first time since SummerSlam, Randy Orton was in action on SmackDown Live as “The Viper” would go one-on-one with Bray Wyatt’s follower Erick Rowan. Randy Orton would make relatively quick work of Erick Rowan, hitting Rowan with the RKO and pinning Rowan for the win. The lights would then go out and, when the spotlight rests on Randy Orton, Erick Rowan’s sheep mask is all that remains in the ring. Meanwhile, Bray Wyatt appears on the big screen, telling Randy Orton that he is a “god” and a god can “never die”, advising Orton to “run”.

The women of SmackDown Live would be in tag action on SmackDown Live as Nikki Bella would team with Naomi to face the team of Carmella and Natalya. Early on in the match, Natalya would knock Naomi off of the ring apron before locking in the Sharpshooter on Nikki Bella, but this is when Carmella would decide to pull Nikki out of the ring and toss her into the barricade. The referee would then end the match by disqualification as Carmella puts the boots to Nikki on the outside as Natalya looks on perplexed before Naomi enters the ring, taking Natalya out with a kick to the head. Naomi then exits the ring, chasing Carmella off before checking on Nikki.

Then it was time for the main event as, just under three weeks before they challenge AJ Styles for the WWE World Championship in a Triple Threat Match at No Mercy, fifteen-time former World Champion John Cena would go one-on-one with “The Lunatic Fringe” Dean Ambrose. During the match, John Cena would score with the Attitude Adjustment to Dean Ambrose, but Ambrose would kick out. Cena would then go for a second Attitude Adjustment, but Ambrose would counter, spiking Cena with Dirty Deeds, but Cena would kick out! Shortly after this, Cena goes for the Attitude Adjustment again, but “The Lunatic Fringe” counters again, this time rolling Cena up and getting the three-count to pick up the win. Cena would then roll to the outside, sitting in disbelief over the loss and this is when AJ Styles would spot his opening as the WWE World Champion leaps off of the barricade, blasting Cena with the Phenomenal Forearm!

With Ambrose unaware of the champion’s presence, AJ Styles would roll into the ring, catching “The Lunatic Fringe” with the Pele Kick! As the WWE World Champion stands tall with a smile on his face, SmackDown Live General Manager Daniel Bryan comes out to the stage, saying that, last week, SmackDown Live Commissioner Shane McMahon assured Dean Ambrose that he would get his one-on-one rematch for the WWE World Title. The GM then announces that, on next week’s SmackDown Live, the rematch will happen as AJ Styles will defend the WWE World Championship against Dean Ambrose! Upon hearing this announcement, the champion would turn around to try and further damage Ambrose, but “The Lunatic Fringe” was lying in wait, spiking Styles with Dirty Deeds, leaving Ambrose standing tall, more than ready for his rematch for the gold next week!