This week, on the penultimate episode of season two, everyone is under pressure. That does or does not include Philip Price, who apparently listens to Kanye West’s “I Am A God” on repeat. The episode kicks off with a meeting between Price and Terry Colby (Bruce Altman), who got Angela the job at E Corp. They discuss Colby’s new book (The Last Honest Man) and plans the corporation has to influence the government to assist China with something they want to do in the Congo. It’s not made explicit what, but foreign intervention there has historically never been all that great for the Congo.

History hangs heavy over this scene, as the majority features Price sitting at his desk in front of the “Humoristische Karte von Europa im Jahre 1914.” It’s a satirical map depicting tensions in Europe at the outbreak of WWI. As Price ruminates on power–he wants to be able to travel the planet and know he’s the most powerful man in any room–the map seems like foreshadowing. Nothing bad has ever happened to anyone who sat in front of a map of Europe and mused about power. (Price also mentions that there is one, maybe two people who are more powerful than he. Elliot and Mr. Robot, perhaps?) 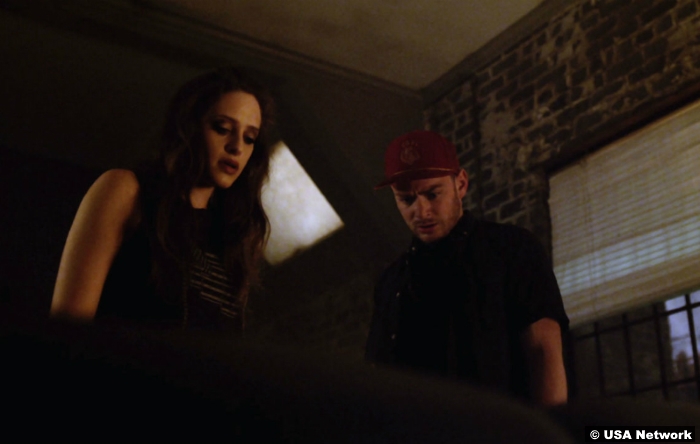 Moving on: I was critical last week of the show’s increasing use of the cliffhanger-y “What are they looking at?” ending shots and thankfully, the show resolves those cliffhangers pretty quickly (and then strands Angela in another one). But before that happens, back to our cliffhangers already in progress. It turns out that Darlene and Cisco’s were intertwined. In Susan Jacobs’s apartment, Cisco discovered one of the members of the DC crew (the fsociety newcomers who had gone to the capital for that little stunt with the Wall Street bull’s balls). It’s him who’s at the door when Darlene answers. Presumably he knocked because he was having to carry Vincent, whose bruising makes it look like he was dropped off a building or hit by a car. (I was close–he was in a car accident, after he and the rest of the DC gang were chased by the police. He was the only one who got away and from the FBI scenes, it sounds like the rest of the group is pretty talkative.)

Against her better instincts, Darlene lets Cisco talk her into taking Vincent to the hospital. This ends up being disastrous, although the FBI raids Cisco’s apartment later, so staying wasn’t a much better option. At the hospital, Darlene tells a story about her own memory of Coney Island–the time she was kidnapped by a little old lady. The memory is actually a pleasant one for Darlene–the lady asked her what she wanted to eat, unlike Darlene’s family, and the little girl felt at home–until the police found her and returned her to her family. The only thing Darlene would have missed about her life was Elliot. He’s the real leader, she says. She’s not the successor.

She also brings up Stage 2, which, as we learned last week, is Elliot’s plan. Cisco doesn’t seem to know much about it, but let’s speculate! Is Stage 2 a plan to liquidate fsociety save Elliot (and maybe Darlene)? Is it why Mobley and Trenton are still missing?

We don’t find out, but meanwhile, the FBI ends up at Susan Jacobs’s place thanks to the Chatty Cathies from the DC crew. Dom is called in because Cisco, “a person of interest in [her] code name case” was spotted at the apartment with Vincent. Dom doesn’t understand why the apartment wasn’t just kept under surveillance, instead of basically hanging out a shingle there that reads “FBI AT WORK.” She’s told that Director Comey is being more aggressive since the debacle with the leaked conference call. That may be true, but my hackles are raised, especially after the Bureau gets a sketch of Cisco, which they want to release. (It matches a sketch Ollie gave them.) Dom, still (no pun intended) gunshy after the China incident, is immediately against it, arguing that it’ll be effectively a death sentence once Dark Army sees it. Her boss shuts her down and the FBI releases it. Hey, remember how he was “sick” when the agents were killed in China? 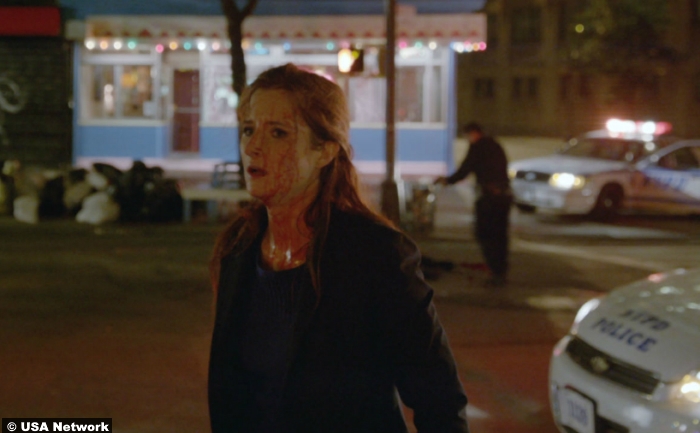 Anyway, Dom traces the cab to Cisco’s apartment, which is raided, and then she answers a call from a hospital nurse who saw the sketch on TV. Dom realizes that the news wasn’t on when Cisco and Darlene were there and so they should still be close by, since they’re supposed to return in an hour (after Vincent has had tests). Her intuition leads her to the closest restaurant, where she finds Darlene and Cisco. She talks to them for only a few seconds before a duo on a motorcycle pulls up and one rider sprays the diner with bullets before shooting himself. Dom emerges splattered in blood. There’s no sign of what happened to Darlene and Cisco, but from the blood spray on the window, it appears that Cisco is no longer with us.

While all of this is going on, Elliot meets with Joanna, who wants him to trace the phone she thinks was left by Tyrell. Elliot decamps to his apartment with Joanna’s driver to complete the search for the phone, which he traces to an address on 82nd St that clearly unnerves the driver. Tyrell wouldn’t be calling from “that house,” he says. Elliot doesn’t seem to dwell on this, too busy wondering why exactly Mr. Robot has disappeared. He remembers that Mr. Robot was desperate to return to the apartment and has been since they got out of prison, so he asks us to look around the apartment and tell him if we see anything. I didn’t, unless it’s the mail cubby. Or the remote control. Or, I don’t know, the blender. 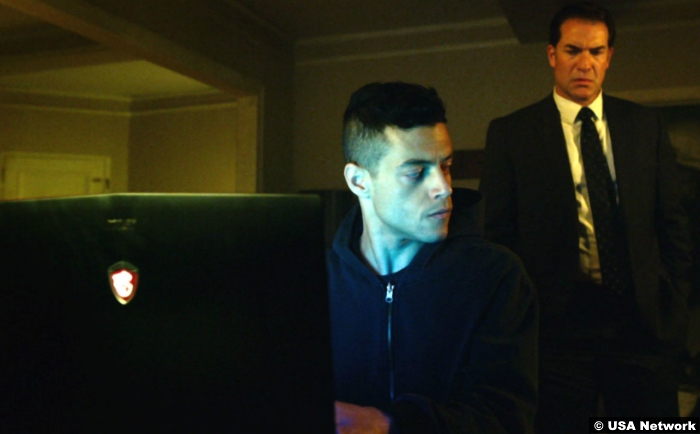 This theme of paying close attention is echoed in Elliot’s meeting with Angela on a subway car, where both sit under ads for a sound system that extol the virtue of careful listening. Angela tells him that she is going to turn herself in, but she will not implicate anyone else. After Elliot leaves (and they kiss), two people confront Angela on the car. This is cliffhangered, but she’s still alive as of next week (according to the preview) and the synopsis says “Angela makes an acquaintance.” Oh please, oh please, let it be Whiterose.

9/10 – As the season barrels to a close, everything is getting too close, too fast. The paranoia is infectious and the story is just as curious as ever, but will the show be able to pull it off? We’ll find out next week.