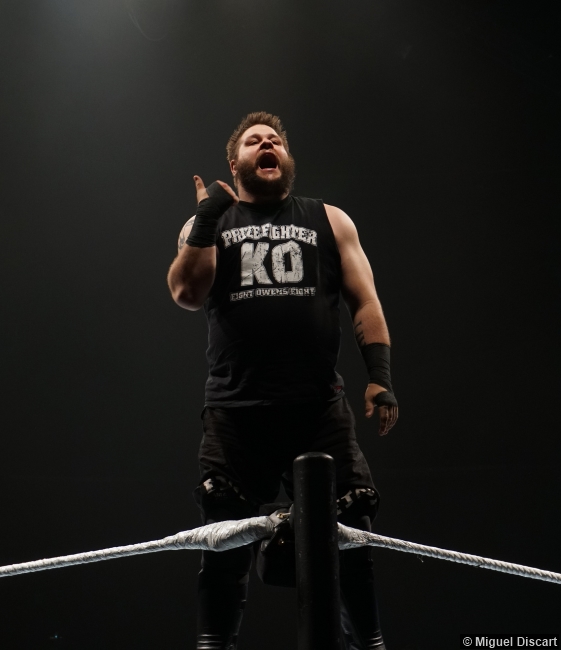 After they were sent packing by their respective WWE Money-in-the-Bank opponents John Cena and The New Day on RAW, SmackDown would kick off with The Club as AJ Styles, Luke Gallows, & Karl Anderson make their way to the ring. Styles says that the “dream match” of John Cena versus AJ Styles will make this year’s WWE Money-in-the-Bank event one of the biggest of all-time. AJ then says that, with the brand extension coming up, this could be the first and only time they see Cena and himself go one-on-one. AJ continues, saying that the “new era” cannot truly begin until he takes out John Cena before saying that he let everyone know when he arrived in WWE that The Club was a “package deal”. Styles says that they will “reign” and they will “dominate” as he will show Cena that Cena cannot beat him before vowing that Luke Gallows & Karl Anderson will be the new WWE Tag Team Champions come WWE Money-in-the-Bank.

This brings out one of the other three teams in the Fatal 4-Way Tag Match for the WWE Tag Team Titles at WWE Money-in-the-Bank as Enzo & Cass come out to confront The Club. Big Cass tells The Club that there are four teams in the title match at WWE Money-in-the-Bank and only one team can walk out as the WWE Tag Team Champions and it won’t be the “Mr. Clean dream team”, referring to Gallows & Anderson. Enzo then declares that they are looking at the next WWE Tag Team Champions. Karl Anderson responds by saying that The Club has been making a living for the last ten years by being the “absolute best”. Anderson then asks Enzo what he’s been doing, “managing a Hooters” before Luke Gallows says that the last time that Enzo was in a big match, Enzo “went to sleep”. Enzo then states that “money walks and money talks” and they should pay attention before Big Cass declares that there’s only “one word” to describe The Club and that is “s-a-w-f-t, sawft”!

With WWE Tag Team Champions The New Day guests on commentary, two of the three teams in the Fatal 4-Way Tag Match for the WWE Tag Team Titles would square off in the opening match of the night as Enzo & Cass would face Luke Gallows & Karl Anderson. During the match, the fourth piece of the puzzle, The Vaudevillains, would come out to the stage, watching the match from a safe distance. Later on in the match, The Vaudevillains would come down to ringside with their sights set on Big Cass, but The New Day would meet The Vaudevillains on the outside and an all-out brawl would break out as all four teams would enter the ring, brawling with each other as the match is called off. The New Day would battle Luke Gallows & Karl Anderson on the outside with Enzo & Cass getting the better of The Vaudevillains, leaving Enzo & Cass standing tall in the ring with the other three teams on the outside.

With ten nights left before WWE Money-in-the-Bank, four of the six competitors in the Money-in-the-Bank Ladder Match would be in tag team action on SmackDown as Sami Zayn would team with “The Swiss Superman” Cesaro to face Kevin Owens and Alberto Del Rio. During the match, the hatred between Sami Zayn and Kevin Owens would boil over as the two rivals would abandon their match as they brawl to the backstage area. Later on in the match, the brawl between Sami and Owens would make its way back to ringside. This would lead to a confrontation between Kevin Owens and Alberto Del Rio with Del Rio taking exception to Owens essentially abandoning him. The argument would be broke up by Sami Zayn, who dives to the outside, taking out both Owens and Del Rio. Cesaro would then catch Del Rio with one of his signature European uppercuts and following it up with a suplex on the floor.

“The Swiss Superman” then brings Del Rio back into the ring, getting a near-fall over Del Rio with a high cross body. Cesaro would then look for the Cesaro Swing, but Kevin Owens would intervene with a super kick to Cesaro before Sami Zayn takes Owens out with a suplex. Cesaro then catches Del Rio with a pop-up European uppercut before going corner-to-corner with uppercuts to Del Rio. Cesaro then sends Del Rio for a ride with the Cesaro Swing, transitioning into the Sharpshooter but Kevin Owens again gets involved and Cesaro is quick to send Owens packing out of the ring. Cesaro then has Del Rio on the top rope, but Owens shakes the top rope, making Cesaro crotch himself on the top rope before Del Rio hits the double stomp off of the top rope to Cesaro. Kevin Owens then tags himself in, pulling Del Rio out of the ring and tossing his tag partner into the barricade before pouncing on the pin, securing the three-count to pick up the win for his team.

After Natalya & Becky Lynch were on the receiving end of another beatdown by Charlotte & Dana Brooke on RAW, “The Irish Lass Kicker” Becky Lynch, with Natalya in her corner, would go one-on-one with Dana Brooke, with Women’s Champion Charlotte in her corner. During the match, Charlotte would repeatedly get involved in the match behind the referee’s back and this would lead to an encounter between Charlotte and Natalya, sparking a brawl between the two. The referee then exits the ring to restore order, ejecting both Charlotte and Natalya from ringside! Now having to contend with Becky Lynch on her own, Dana Brooke would fail to keep Becky down for a three-count with a surprise roll-up before Becky locks Dana in the Dis-Arm-Her, making Dana tap out to pick up the win.

With Dolph Ziggler a guest on commentary, Dolph’s rival, “The Lone Wolf” Baron Corbin, would go one-on-one with Kalisto. During the match, it would become clear that Baron Corbin’s assault on Kalisto would be to send a message to Dolph Ziggler at ringside as Corbin would feign throwing Kalisto into Dolph before sending Kalisto head-first into the exposed steel of the ring apron. Despite an impressive showing from Kalisto, it was Baron Corbin planting the high flyer with the End of Days, pinning Kalisto for the win.

Backstage, Apollo Crews would confront Sheamus following an attack by “The Celtic Warrior” a few weeks ago as Crews would get a measure of revenge by popping Sheamus in the mouth with a right hand, knocking Sheamus to the floor and effectively embarrassing the former World Champion.

Then it was time for the main event as two of the six competitors in the Money-in-the-Bank Ladder Match a week from Sunday would renew their rivalry on SmackDown as “The Lunatic Fringe” Dean Ambrose would go one-on-one with “Y2J” Chris Jericho. During the match, Dean Ambrose would bring Chris Jericho to the outside as “The Lunatic Fringe” would expose the announce table on the outside with the intent of delivering Dirty Deeds to “Y2J”, but Jericho would counter, catapulting Ambrose off of the announce table with Ambrose bouncing face-first off of the floor! Later on in the match, Dean Ambrose would go for Dirty Deeds, but Chris Jericho would fight out before shoving Ambrose towards the referee. While Ambrose would avoid contact with the referee, the brief distraction would give Jericho enough time to capitalize with the Codebreaker to “The Lunatic Fringe”, pinning Ambrose to pick up the win.