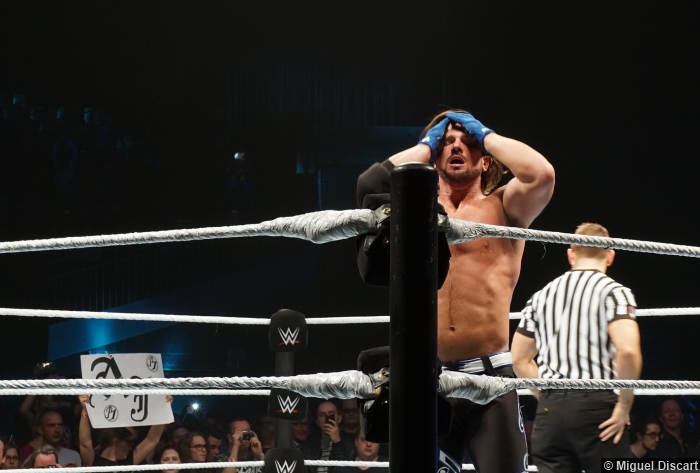 Downfall of The Phenomenal One.

One night after a barbaric and unforgiving Extreme Rules, the 1200th edition of WWE Monday Night RAW came to you, live, from the Royal Farms Arena in Baltimore, MD. At Extreme Rules, WWE World Heavyweight Champion Roman Reigns and #1 Contender AJ Styles waged an all-out war in their Extreme Rules Match for the WWE World Heavyweight Championship, which saw Reigns send AJ Styles crashing through two announce tables and Styles repeatedly plant the champion with the Styles Clash, even once hitting the Styles Clash on a steel chair, but after Styles was unable to put Reigns away, “The Phenomenal One” would unleash an assault on Roman and his cousins, The Usos, dismantling The Bloodline with vicious steel chair shots, but when Styles would go for the Phenomenal Forearm, AJ would get caught in mid-air with the Spear from Roman Reigns as Roman secured the three-count to successfully retain the WWE World Heavyweight Championship in a hellacious match. While the Extreme Rules Match for the title was one for the record books, what had everyone talking about Extreme Rules took place after the match as, while Roman Reigns was celebrating a hard-fought title defense, the champion was blindsided by the returning Seth Rollins! After a six month hiatus due to a knee injury back in November, “The Architect” would plant Roman Reigns with the Pedigree before grabbing the WWE World Heavyweight Title belt and holding it high above his head, making it clear that he wants the title back that he never lost. With Seth Rollins scheduled to kick off RAW, what will the former champion have to say about his shocking return and will Roman Reigns have some payback in mind for his former Shield brethren?