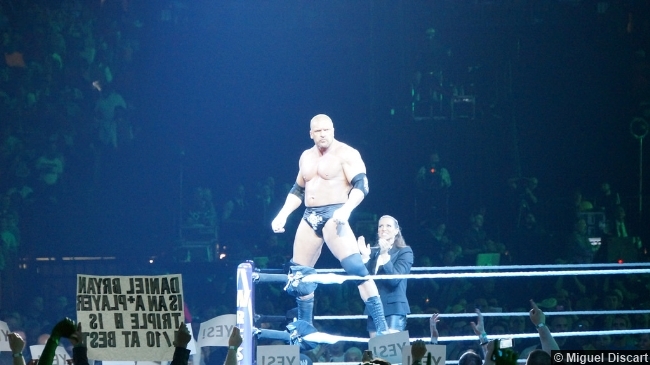 The WWE Network special, WWE Roadblock, came to you, live exclusively on the WWE Network, from the Ricoh Coliseum in Toronto, Ontario, Canada. After Fastlane a few weeks ago, everything appeared to be set in stone with Roman Reigns scheduled to challenge Triple H for the WWE World Heavyweight Championship in the main event of WrestleMania and Dean Ambrose set to square off with “The Beast” Brock Lesnar in a No Holds Barred Street Fight at “The Show of Shows”, but Dean Ambrose would potentially throw a wrench into everyone’s plans when he challenged Triple H to a one-on-one match at Roadblock with the WWE World Heavyweight Championship on the line! “The Game” would accept the challenge and, now at Roadblock, “The Lunatic Fringe” has the opportunity of a lifetime as Dean Ambrose could very well win the WWE World Heavyweight Championship and send the WrestleMania card into complete disarray.

While Dean Ambrose would challenge Triple H for the WWE World Heavyweight Championship, Ambrose’s scheduled WrestleMania opponent would also be in action at Roadblock as “The Beast” Brock Lesnar would go one-on-one with the man who orchestrated his elimination from the Royal Rumble Match, the self-proclaimed “Eater of Worlds” Bray Wyatt! Not only that, but the WWE Tag Team Titles would be defended as The New Day would put the gold on the line against League of Nations members Sheamus & King Barrett while NXT would also be showcased with an NXT Tag Team Title match pitting The Revival against Enzo Amore & Colin Cassady!