Your SO OF COURSE preview of WWE Fastlane 2016

In this day and age you can’t just “predict” a PPV anymore, you have to to account for the capricious whims of WWE’s septuagenarian, sleep-deprived egomaniac owner. You can’t just “preview” a PPV…you have to Preview how things should go, in a reasonable and sane world, and then add “so of course…” and explain what Vince McMahon will probably do instead.

So consider this your SO OF COURSE preview of WWE WRESTLEMANIA BETA EDITION! 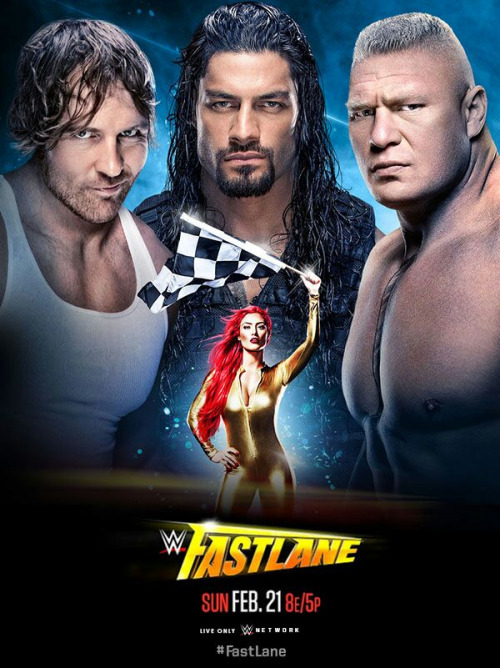 Now featuring the most over heel in NXT.

Last time on SO OF COURSE, WWE ran its annual Royal Rumble PPV, a show where everyone predicted that either Roman Reigns would walk out of the show with the WWE title or Triple H would. Triple H did. So…yay? I guess? The real surprise was who the final elimination was, as Roman Reigns was eliminated second-to-last and former Shieldmate Dean Ambrose came this close to winning the gold.

Now we’re a little more than a month away from what WWE hopes to be the biggest WrestleMania ever, despite half the main event scene nursing injuries, and Fastlane is the company’s last chance to set the table before the big dance. How does the show look? Let’s find out.

ALBERTO DEL RIO vs KALISTO (again) FOR THE US TITLE

How many times has this match happened? Wikipedia says four, making this the fifth, but I swear it’s been double that many. It feels like these two are going at it in some match or another every week. Their first match was only a month ago, and now that we’re sufficiently sick of it, it’s time to see it again! This is a two out of three falls match so hopefully it’ll go longer than the usual preshow time of sub-five minutes.

Kalisto really needs the win as he’s the more bankable star. On the other hand the company has more money invested into Del Rio. It’s the same dilemma they faced last month when they went with Kalisto. It makes sense that this is the end of the feud (which means the babyface goes over) so it’s logical to expect Kalisto to finally rid himself of Del Rio.

RYBERG, BIG SHOW AND KANE vs THE WYATT FAMILY SANS THE ONLY WYATT THAT MATTERS

Serious question: How many people are actually looking forward to this match. Like who is checking wikipedia for the card and saying “oh wow Big Show, Kane and Ryback taking on three of the Wyatts!” Who, besides Vince McMahon himself, is looking at this match with anything other than unbridled nausea? Take three “babyface” acts, one—Ryback—who only gets a pop for his inane chants, one—Big Show—who can’t buy a fan reaction anymore, and Kane, who…well he also can’t buy a pop. When you’re in a group and Ryback is arguably the most popular part of it, it’s time to leave the group.

Meanwhile on the other side there’s the Wyatt clan, who, other than Strowman, are DOA. Strowman is obviously the next Vince McMahon fetish that he’ll push way beyond his capacity and then get all angry at us when we don’t see him as the next great monster superstar. In other words, he’s The Great Khali. I’m sure he’s a lock to win the Andre Battle Royal at WrestleMania though.

What should happen in this match? Hopefully something mercifully short. Strowman choking out Kane seems like a safe bet, if only because it seems physically possible, which him choking out Big Show does not. Again, Ryback is the only one of the babyface trio that isn’t on the edge of retirement, and he’s also the only one of the three who gets any kind of a reaction anymore, so maybe don’t job him out?

Once upon a time Sasha Banks and Becky Lynch competed in one of the best matches of the year. But that was then and this is a tag match against Naomi and Tamina. Let’s just pray that neither of the former NXT superstars get hurt, mkay?

The story for the match is simple: Sasha joined the main roster as a member of Team B.A.D., alongside Naomi and Tamina. Then, for no real storyline reason at all, Sasha decided to be done with the group, which led to her being attacked by her former teammates. Becky Lynch, who had just been humiliated by Banks like one week prior, jumped to her aid and the duo fought off the former B.A.D. girls. The motivations for the hero Lynch escape me, and that’s usually enough to sour me on the match, but in this case, I appreciate that WWE went with the opposite booking. Instead of a face attacking another face for no reason, you had a face helping a heel for no reason. That’s at least a different spoke of Vince’s wheel of stupid diva storylines.

So what should happen here? Sasha and Becky should figuratively murder Naomi and Tamina. Anything less than an absolute crushing would be a gross disappointment. Hopefully Banks and Lynch both have a place in the Divas title match at WrestleMania, and if not then at least Sasha needs one, in which case she (and/or Lynch) need the “W” way more than either of the jabronis their facing.

DOLPH ZIGGLER vs KEVIN OWENS FOR THE IC TITLE

This is one of those matches where there’s no real storyline for it, due to the real storyline advances happening in the buildup to the show. In this case, it was Ambrose losing the IC title back to Kevin Owens on the go-home episode of Raw. That had to be done, I’m assuming, because WWE remembered there were no more Raws before Fastlane and 1/3 of their PPV main event was holding a superfluous title. So they hotshotted the belt back to its former holder.

So while there isn’t a big story here, Kevin Owens is set to defend the title against Dolph Ziggler. On PPV. On a PPV that only has five matches booked for the three hour duration.

If this match isn’t balls to the wall great I don’t know how to finish this sentence. It’s going to be balls to the wall great, and in the end Ziggler is going to sell a popup powerbomb like he was shot out of a cannon and into a brick wall from ten feet out. There’s simply no other finish that makes any sense. I don’t know what Kevin Owens’ plans are for WrestleMania, but there’s no reason they shouldn’t include him defending the intercontinental championship.

CHARLOTTE vs BRIE BELLA FOR THE DIVAS TITLE

Okay so this is interesting. When was the last time we had two divas matches on a WWE PPV? Is this a sign that the Divas revolution is over and the good guys won? Well no, because there’s still Tamina and Brie Bella floating around the division and they can’t do much of anything in the ring.

I feel bad for Brie. She and Nikki came to WWE during the era when all a Diva needed to be was a pretty face/body. The Bellas had the whole “they’re twins” thing that gave them an advantage in booking, and then they left to pursue other opportunities. When they returned the divas division was still largely about looks and less about in-ring talent, but there was some (minor) effort going on to work better matches. Nikki improved and has continued to improve by leaps and bonds. Brie has not. Brie is just as awkward as ever in her matches. Her strikes are weak, her selling is pitiful. She never looks comfortable. She’s not in the same league as Charlotte and Charlotte is arguably the weakest of the NXT Four Horsewomen. But this is probably her farewell tour as she’s likely set to retire and go make little Daniel Bryan Jr’s. Can’t hate her for that.

There’s no way she wins, though. Charlotte will continue looking strong heading into WrestleMania. Brie will have her 8 minutes and then ride off into the sunset.

How weird is it that we have a Brock Lesnar match where he—the strongest booked performer in ages—is the least likely to win? Obvious booking is obvious: Bray Wyatt is going to cost Lesnar the victory, setting up their WrestleMania match (which Wyatt will lose, because obviously they’re going to have him lose 21 WrestleMania matches in a row). That only leaves two possible victors to this contest. The obvious winner in Roman Reigns and the surprise winner in Dean Ambrose.

If Roman wins it’ll be about the big picture. He won the title by breaking through the brick wall that was Triple H and Vince McMahon, lost the title after being forced to defend it in the Royal Rumble, and now seeks to win it back against the guy who took it from him.

If Dean wins it’ll be about course-correcting after the “big picture” failed to be warmly received by the fans now three years in a row. Fans rejected Batista vs Orton so they course-corrected things over to Daniel Bryan (and thanks for that, too). Fans rejected Brock Lesnar vs Roman Reigns, but they stuck to their guns…until the literal last minute and course-corrected to Seth Rollins (and thanks for that, too). Now, faced with the idea of Triple H vs Roman Reigns fans are ready to hate this one too, though admittedly, not as strongly as the previous two years. Maybe Vince has succeeded in wearing the fans down? No, we still aren’t on board with Roman Reigns as the new John Cena. Switching things up and giving the push to Dean Ambrose would be a big shakeup in the conventional booking wisdom heading into WrestleMania.

But don’t get your hopes up. There’s no real match left on the card for Roman Reigns if he’s not in the main event, and they’re not sticking him in the Andre Battle Royal. He’s the new goldenboy. He’s the new house; never bet against the house.