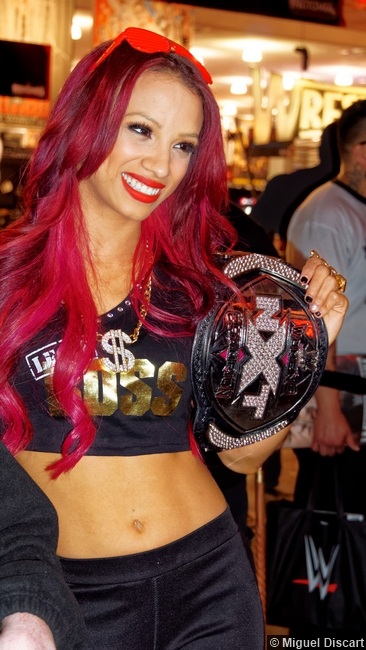 Bubba Ray continues, saying that the fans chant for tables every night before telling the fans to take a good look at the tables around the ring because it’s the “last time” they are ever going to see those tables again! With that, Bubba Ray orders the WWE crew to take down every table out there and get rid of them. As the WWE crew removes the tables, Bubba Ray says that the tables didn’t earn them nine reigns as WWE Tag Team Champions, saying that the fans chant for tables, but they should be chanting for them. Leaning on the last table set up in the ring, Bubba Ray says that it’s the last table before saying that this is the last time that the fans are ever going to hear it. Bubba Ray then says, “D-Von, get the…” before The Dudley Boyz drop their microphones, take the table down, and carry the table to the back!

With Becky Lynch a guest on commentary, her Fastlane tag team partner was in action on SmackDown as “The Boss” Sasha Banks would go one-on-one with Naomi, with Tamina in her corner. During the match, Sasha Banks would find herself on the ring apron and Naomi would pull Sasha down as “The Boss” lands back first on the apron. Naomi follows this up by driving Sasha into the apron a second time before bringing the fight back into the ring. Later on in the match, Tamina would trip Sasha up behind the referee’s back, allowing Naomi to hit the headscissors driver, but Sasha would kick out of the ensuing pin. Then, on the outside of the ring, Becky Lynch would confront Tamina, but would get knocked down with a right hand for her trouble. Tamina then sends Becky into the barricade before Sasha breaks things up, shoving Tamina into Becky’s chair before kicking Tamina in the face! Sasha then heads back into the ring where Naomi tries to surprise Sasha with a roll-up, but “The Boss” counters into the Bank Statement, making Naomi tap out to pick up the win.

After having laid waste to Kane, Big Show, and Ryback in recent weeks, The Wyatt Family would make an appearance on SmackDown. Bray Wyatt says that, in ancient Greek mythology, there was a “war of the titans”, which was a battle between the “old guard and the new” for control of the entire universe. Bray continues, saying that the king of the gods, Zeus, conquered the titans before saying that the Greek’s “mythology” is their “reality”. Bray then says that he is now the “king of the gods” and Luke Harper, Erick Rowan, & Braun Strowman are his “army”. Bray then says that they have their sights set on ridding WWE of every one of its “titans” because they think that it’s about time that the fans worship a “new generation of gods”. Luke Harper then says that, in the presence of The Wyatt Family, even the largest “titans” turn to “mere mortals”. Erick Rowan then says that there’s “no point in resisting”, saying they should “accept their fate”. Braun Strowman then adds that the “earth will shake” and “darkness will consume all”. Bray then says that the “gods of today” are ready to take their place, declaring that he is “The Eater of Worlds” and the war against their “gods” has only “just begun”. Bray then kneels in front of his followers, shouting “follow the buzzards”.

In 6-Man Tag action, “The Man That Gravity Forgot” Neville would join forces with The Lucha Dragons to face the team of Stardust and The Ascension. In the end, it was Neville scoring with the Red Arrow, pinning Konnor to pick up the win for his team.

Then it was time for a much anticipated main event as, after their initial one-on-one match two weeks ago on RAW, the rematch would take place on SmackDown as “The Phenomenal” AJ Styles would go one-on-one with “Y2J” Chris Jericho. Throughout the match, the two veterans would go hold-for-hold with AJ Styles surviving the Lionsault and Chris Jericho countering the Styles Clash into the Walls of Jericho. However, Styles would counter out of the Walls of Jericho into the Calf Crusher and Jericho would nearly tap out before being able to grab the bottom rope to break the hold. Shortly after this, AJ Styles would go for a springboard off of the top rope, but Chris Jericho would hang Styles up on the top rope before sending “The Phenomenal One” into the corner and following it up with the Codebreaker, finally keeping Styles down for the three-count, handing AJ Styles his first loss in WWE.