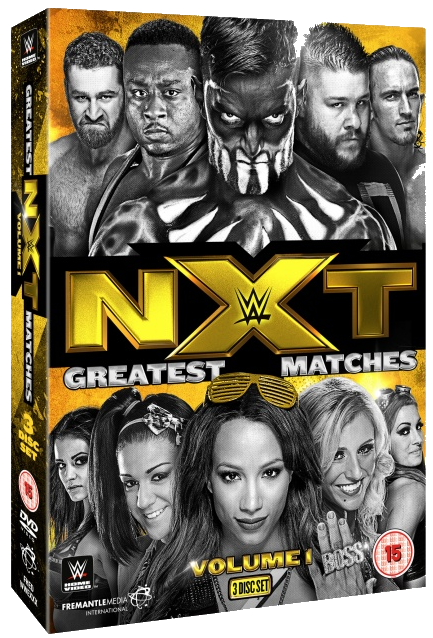 OK, right off the bat, I’m going to go with my only complaint in relation to this compilation. While “Best of” lists are always subjective and every single person will have at least one match they don’t think should be on the set as well as at least one match they can’t understand has been omitted, the fact this release is under 4hrs long and is covering three years when (for example) the Best PPV Matches of 2015 only covered one year and ran for just under 9hrs.

It seems like NXT is being short-changed and as this is the same price as the aforementioned PPV collection, also seems like the fans are being jipped too.

Now that the complaint is out of the way, we can take a look at why this is still a great three-disc set.

Of course, this ignores the original version of NXT that was a glorified version of Tough Enough (before that too had a reboot), which was a good idea in theory, but left a lot to be desired in execution. That being said, anything that had Jericho at his peak v Daniel Bryan as their first main-event, then segued into the Daniel Bryan / Derrick Bateman awesomness of Season 4 cannot be all bad.

It also ignores the first few months of the revamped show and the collection kicks off with the finals of the Gold Rush Tournament to crown the first-ever NXT Champion as Jinder Mahal (of all people) taking on a pre-Shield version of Seth Rollins.

It’s a great start and also a wonderful “time capsule” moment to see where Seth has improved immensely from this moment until his unfortunate injury late last year.

There genuinely isn’t a match that goes below “really good” across the three discs, with second match also featuring Seth Rollins defending the title against a ridiculously over Big E. Langston (the “FIVE” gimmick should have came to the main roster with him), this time in full Shield mode. It’s a nice contrast, that’s for sure.

Including the 2-out-of-3 Falls Match between Zayn and Cesaro was a no-brainer as many believe that THIS was the match the elevated the entire brand from “just development” to “viable third outlet” for WWE and probably had a lot to do with the influx of top-name indy talent over the following two years.

The women also get a look in, with three all-female matches and a mixed-tag, which is only fair as the women in NXT have elevated the perception of what women can be in WWE if they are allowed to just wrestle. I mean, it’s not like the promotion didn’t know before (Lita, Mickey, Trish, Victoria, Jazz, etc, were all allowed to just wrestle), but they got so stuck in a rut of what a Diva should be, they forgot what a woman could be.

Outside of the television matches, there are also two untelevised bouts that are well worth a viewing as Cesaro takes on Adrian Neville in a belter of a contest and Hideo Itami battles long-term nemesis Tyler Breeze and… well if you haven’t seen it, I’m not going to spoil the finish for you here.

Triple H (as derided as he has been for his main roster work) deserves all the credit in the world for how he has moulded NXT into what it is today. From watching Breaking Ground and other behind-the-scenes videos, you can see how much this genuinely means to him and how involved he is in the process of moulding the talents to be better than what even they realise they can be.

This is evident with the advent of the Takeover events, which have evolved to become THE must-see WWE events. Partly this is because they are not every month, so truly feel special. Not everyone gets to compete on a Takeover, so when they do (again, referring to Breaking Ground and American Alpha’s elation at being on the Respect card) it’s a career highlight instead of just another PPV.

All of these Takeovers (where we saw the rises of Adrian Neville, Sami Zayn and Kevin Owens for the men and The Four Horsewomen for the ladies) led up to inarguably the biggest night in NXT’s short history as they held a show in Brooklyn, inside the same venue as SummerSlam the following night and the post-PPV edition of RAW on the Monday. The fact that NXT, still a developmental promotion remember, drew only 113 less people than one of the flagship main-roster events inside the same building is a testament to the wrestlers on the roster, the marketing of the brand itself and that Triple H lets the guys wrestle, keeps the storylines simple and reaps the rewards.

Of course, Hunter didn’t do it on his own and one of the biggest influences on all of NXT was “The American Dream” Dusty Rhodes, who sadly passed away in June 2015. To honour him, a tag-team tournament was put together and ran over the course of a one-month period, leading to the semi-finals and final being held at Takeover: Respect, with the match between Samoa Joe & Finn Balor v Baron Corbin & Rhyno for the trophy also being included on the set.

It should also be noted that the best match on the card is also possibly the best (American) women’s match since the glory days of Lita v Trish and was arguably the best NXT match in 2015; Sasha Banks v Bayley for the title. The build-up to the match also helps immensly and is a perfect example of keeping it simple, telling a story and seeing it through.

That the two ladies came close to topping it at Takeover: Respect is a testament to both them and the faith Triple H has in them. While it’s not on this set, it will surely be on Volume 2 and is worth checking out if for nothing else other than Sasha’s heel masterclass in making Yzzi genuinely cry in the front row. It’s been a long time since a heel intentionally made someone cry and then milked it during the match, so to see it again was a highlight for me.

As has been touched on before, the value of this set will be in direct link to whether you have access to the Network or not. If so, there are still two matches on here you won’t have seen and it collates them all in one neat package for you. While for those who do not, this is your chance to get a brief glimpse into why NXT has been the phenomenon that everyone is talking about.