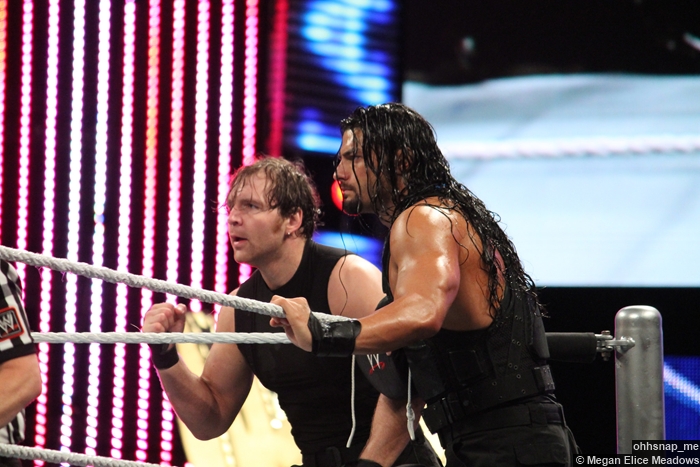 One night after a shocking and unprecedented Royal Rumble, the 1183rd edition of WWE Monday Night RAW came to you, live, from the AmericanAirlines Arena in Miami, FL. Over the years, the Royal Rumble has become synonymous with shocking returns and shocking victories and, with this year’s installment featuring the much-anticipated debut of “The Phenomenal One” AJ Styles, the 29th Rumble was one for the ages. However, no one could have anticipated how the 30-Man Royal Rumble Match for the WWE World Heavyweight Championship would have concluded as, after being assaulted by Roman Reigns at last month’s WWE TLC event, Triple H would return as the surprise #30 entrant in the Rumble! No one was more shocked to see “The Game” than Roman Reigns, but what would shock everyone even more was that Triple H would actually eliminate Reigns from the Rumble, guaranteeing a new champion and, after “The Game” eliminated Dean Ambrose, the unthinkable became a reality as, for the fourteenth time in his legendary career, Triple H is the new WWE World Heavyweight Champion! Throughout the Royal Rumble Match, WWE Chairman Mr. McMahon would throw everything he had at Reigns, instructing The League of Nations to put Roman out of commission, but in the end, the true secret weapon was the Chairman’s son-in-law Triple H. Now that he has lost the WWE World Heavyweight Championship to, of all people, Triple H, how will Roman Reigns react on RAW? Holding his first World Championship in nearly seven years, what will new WWE World Heavyweight Champion Triple H have to say about winning the title?