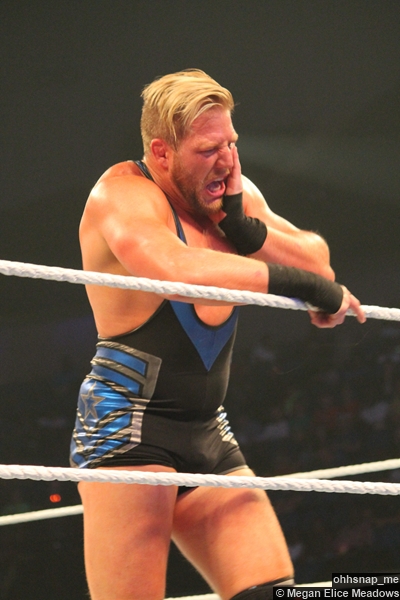 After being dismantled by The Wyatt Family on RAW, The Dudley Boyz would be looking for payback as Bubba Ray & D-Von would face The Wyatt Family’s Erick Rowan & Braun Strowman, with Bray Wyatt & Luke Harper in their corner, in tag team action. Despite sporting an injured shoulder, Bubba Ray would instruct D-Von to “get the tables”, but once the table is set up in the ring, Luke Harper would take Bubba Ray out with a big boot, ending the match by disqualification. The Wyatt Family then sets their sights on destroying The Dudley Boyz as Braun Strowman isolates D-Von, rendering D-Von unconscious with the triangle choke before Luke Harper & Erick Rowan pick up Bubba Ray and slam him through the table! Bray Wyatt then kneels next to the broken table and the broken body of Bubba Ray, screaming “follow the buzzards”.

Following a vicious assault on Divas Champion Charlotte on RAW where, after their title rematch ended in a double count-out, Paige would lock in the PTO on Charlotte on top of the announce table, Paige would go one-on-one with Becky Lynch on SmackDown. In the end, Becky Lynch would go for the Dis-Arm-Her on Paige, but Paige would manage to avoid the submission move before rolling Becky up for the win.

Following a confrontation on RAW, United States Champion Alberto Del Rio, with Zeb Colter in his corner, would go one-on-one with “The Real American” Jack Swagger in a non-title match. During the intense match, both men would find themselves on the outside and that is where Swagger would charge at Del Rio, taking the United States Champion over the ringside barricade. Swagger would then set his sights on Zeb Colter, but before Swagger could get his hands on his former manager, Del Rio strikes Swagger in the back with a steel chair, followed by a second chair shot to the back! Del Rio then rolls Swagger into the ring, but that is when Swagger would fight back, delivering a chair shot to the mid-section of Del Rio, followed by a trio of chair shots to the back, sending Del Rio into retreat.

The WWE Tag Team Champions were in action on SmackDown as The New Day’s Big E & Kofi Kingston, with Xavier Woods in their corner dressed as the Gobbledy Gooker, would face The Lucha Dragons in a non-title match. During the match, Kofi Kingston would go for a pin on Kalisto and would put his foot on the ropes for the illegal advantage, but the Gobbledy Gooker would inexplicably shove Kofi’s feet off of the ropes! A confused Kofi would then be caught by surprise by Kalisto, who hits the Salida del Sol and pins Kofi to pick up the win for The Lucha Dragons! After the match, Big E & Kofi would question the Gobbledy Gooker and this is when one of The Usos would come out to the stage with a kidnapped Xavier Woods, revealing that it was actually the other Uso that was in the turkey costume! With the help of The Lucha Dragons, one of The Usos would bring a tied up Xavier into the ring as the turkey-clad Uso would come off of the top rope with the Superfly Splash to Xavier!

Then it was time for the main event as a new #1 Contender for the Intercontinental Championship would be determined as “The Lunatic Fringe” Dean Ambrose, “The Show Off” Dolph Ziggler, and “Prince Pretty” Tyler Breeze, with Summer Rae in his corner, would compete in a Triple Threat Match with the winner becoming the new #1 Contender with Intercontinental Champion Kevin Owens a guest on commentary. In the end, it was Tyler Breeze looking for the Unprettier on Dolph Ziggler, but Dean Ambrose would intervene, shoving Dolph to the side and spiking Breeze with Dirty Deeds, pinning “Prince Pretty” to win the match and become the new #1 Contender for the Intercontinental Title! After the match, Dean Ambrose would exit the ring, leading to a stare down between the Intercontinental Champion and his new challenger. Ambrose would shove Kevin Owens back into his seat and Owens would get into Ambrose’s face before opting to walk away from the fight.