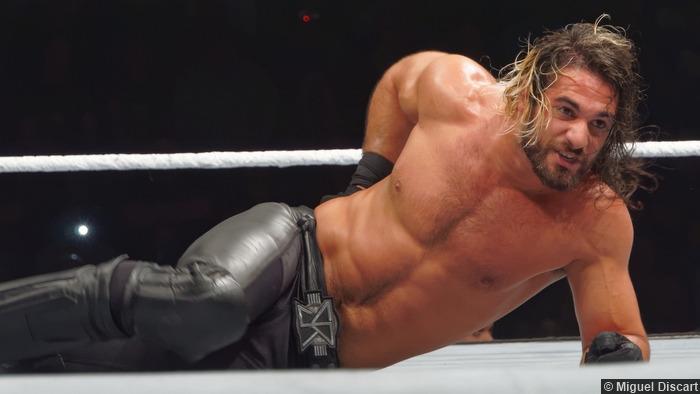 As first reported by ESPN via Twitter and later confirmed by WWE.com, WWE World Heavyweight Champion Seth Rollins suffered a serious knee injury during a match against Kane at a WWE Live Event in Dublin, Ireland last night. As a result of tearing the ACL, MCL, and medial meniscus in his right knee, Rollins will be out of action for six to nine months, putting his return in between May and August of next year. With Seth Rollins on the shelf, WWE.com has announced that Rollins is no longer the WWE World Heavyweight Champion and a new champion will be crowned in a tournament that will take place in just over two weeks at Survivor Series (where Rollins was originally scheduled to defend the title against Roman Reigns). The details and participants of the tournament have not yet been announced. Seth Rollins won the WWE World Heavyweight Championship back at WrestleMania when he cashed in his Money-in-the-Bank briefcase during a one-on-one title match between then champion Brock Lesnar and Roman Reigns, ultimately pinning Reigns in the impromptu Triple Threat Match to become the new champion. Rollins’ last title defense was against Demon Kane at WWE Hell in a Cell.

This is the second time in WWE history that the WWE Championship will be decided via a Survivor Series tournament as, back in 1998, the “Deadly Games” tournament was held and featured such legendary names as The Rock, Mankind, The Undertaker, Kane, & Stone Cold Steve Austin, it would come down to The Rock and Mankind in the Finals with Vince McMahon screwing over Mankind in favor of The Rock becoming the new champion, completing The Rock’s heel turn as the new champion would join The Corporation and the epic feud between The Rock and Mankind would get underway.

What do you think of Seth Rollins’ injury? Post your comments in the box below.