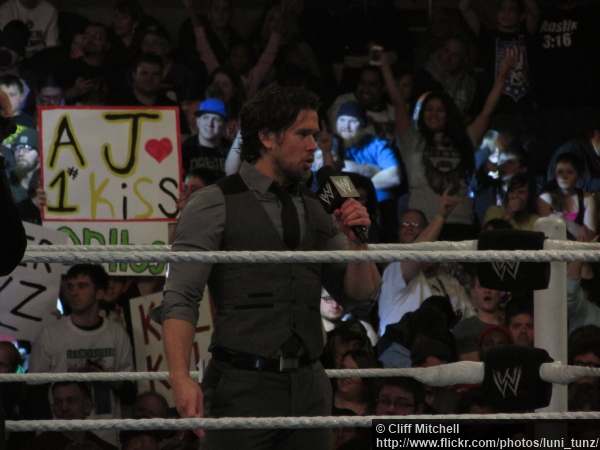 WWE.com announced today that WWE has come to terms on the release of former RAW General Manager Brad Maddox (Tyler Kluttz) after a five-year tenure (two years of which were on the main roster) with the company. PWInsider is reporting that Maddox’s release comes as a result of Maddox using an inappropriate phrase during a dark match promo prior to this week’s SmackDown tapings. Maddox reportedly said “cocky pr*cks” during the promo and WWE was not pleased with Maddox’s choice of words and released him as a result.

After two years in WWE’s now former developmental territory FCW, Brad Maddox would be brought up to the main roster in August 2012 as a referee. Maddox would serve as the referee for a Hell in a Cell Match between CM Punk and Ryback for the WWE Championship in October of 2012, where Maddox would deliberately cost Ryback the WWE Championship. Maddox would later explain that he cost Ryback the match because he’s always wanted to become a wrestler and thought costing Ryback the championship in a main event match would get Vince McMahon’s attention. As a result, McMahon would put Maddox in a match against Ryback with a contract for Maddox on the line with Ryback decisively beating Maddox.

Maddox would return to WWE television in December 2012, now accompanied by his personal cameraman, Carson, and promoting himself as a “YouTube sensation”. Then RAW General Manager Vickie Guerrero would give Maddox the opportunity to earn a contract if he could defeat Randy Orton, but Maddox lost and, after being given three shots at a contract by then SmackDown General Manager Booker T, it was revealed in January 2013 that Maddox, as well as The Shield, had been working for CM Punk’s manager Paul Heyman all along, leading to The Shield beating down Maddox.

After remaining absent from WWE television and mostly working house shows for the rest of 2014, Maddox would pop up in a couple of backstage segments in 2015 and was spotted as one of the Superstars trying to break up a brawl between The Undertaker and Brock Lesnar in July of this year. Maddox would then make a couple of dark match appearances under the names, “Joshua Kingsley” and “Lord Ruffles”. Maddox’s most notable recent appearance was on the November 11 episode of The Tonight Show with Jimmy Fallon where Maddox, who was dressed as a turkey, would be laid out with a Tombstone Piledriver by The Undertaker in a segment used to promote Survivor Series. Maddox’s final WWE appearance was on the November 21 episode of Main Event, where he teamed with Adam Rose in a losing effort against The Usos.

What do you think of Brad Maddox’s release? Post your comments in the box below.