WWE2K16 perfectly captures the current mood, direction and quality of the modern WWE product. By that I mean it is gorgeous to look at and has a deep roster, but is horrible to listen to, and boring more often than not.

That’s it. That’s the whole review. There’s nothing I can say that will summarize it better than that, and there’s nothing to add that will give any more information than what you can glean from that one sentence. WWE 2K16 is gorgeous to look at and has a deep roster, but is horrible to listen to, and boring more often than not.

When THQ went under, 2K scooped up the rights to WWE’s video game franchise. The first game they released was  WWE 2K14, a fair game for the Xbox 360 and PS3 that was basically done by the time 2K took over. The first game for the next generation was last year’s 2K15, which was a stripped down fiasco that had fans up in arms. 2K assured us that the problems were due to a rushed development and the challenges with working on new systems (Xbox One and PS4). Now comes 2K16 and while some of the 2K15 problems have been corrected, 2K has managed to create entirely new problems. There is some good here, which is what is frustrating; the good is grossly outweighed by the bad, adding up to an experience that doesn’t deserve to be paid for, not for the price of the game or the countless DLC packs that are sure to come out. 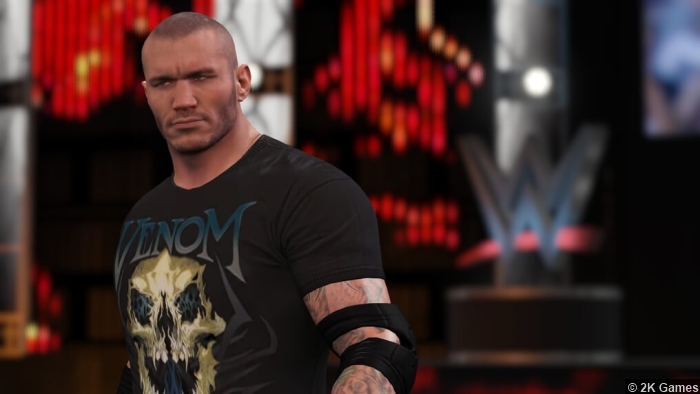 As said, 2K16 is gorgeous to look at. The wrestlers and environments are so perfectly realized that, from a distance, you can be fooled for a moment into thinking you’re looking at the real thing. Loading screens are a mix between actual still images and frames from in-game models, and honestly you will take a few seconds figuring out which is which. Animations are still a little clunky and there is still some clipping when the models collide, but overall there’s nothing to complain about when it comes to how pretty this game looks. It’s on par with Metal Gear Solid 5 in terms of lifelike character models. There are times when the visuals suffer (such as when you’re playing with a deceased character who didn’t get their face digitally scanned into the game), but even then the models are better looking than any WWE game (and most any other game) before it. 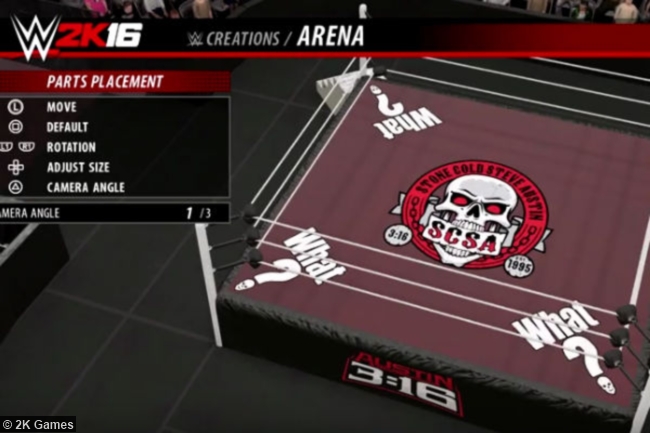 Even more than gameplay, the one feature wrestling game fans look forward to above all else is the creation suite. Fans love being able to create—from scratch—everyone from Santa Claus to Owen Hart, from Papa Shango to the Devil himself. In recent years the ability to create entire arenas, title belts and shows has given more depth to the creation suite. Now you can even tweak (parts of) the original roster of wrestlers. Back in the old days, the most you could do was choose from a few dozen outfits and mix and match a few dozen heads, now you can tweak everything from the size of cheekbones to the thickness of the solar plexus. You can remake the ECW arena, recreate the Monday Nitro set, or even reimagine the big fisted Smackdown stage. You’re only limited by your imagination and the controller in front of you. It would be nice if you could use a keyboard and mouse for more precise (and speedy) creating, but maybe in future games. 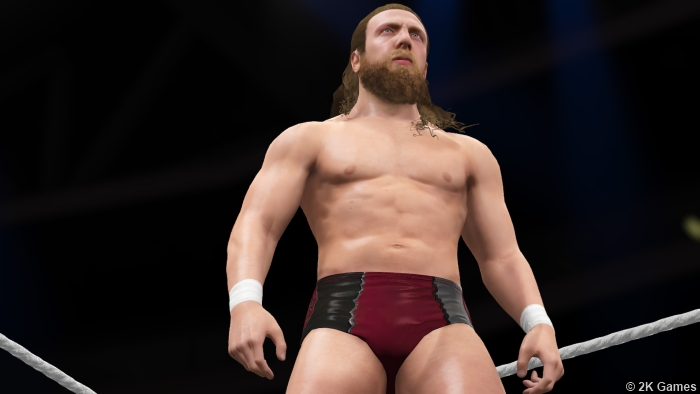 With a few notable exceptions, you’ll be hard pressed to find a famous WWF/E wrestler that’s not represented. There’s no CM Punk, no Hogan and no Four Horsewomen (Sasha Banks, Bayley, Charlotte and Becky Lynch), but—and this is only a minor exaggeration—everyone else and their brother is available. And those who are not can be remade with pinpoint accuracy in the aforementioned creation suite. There will surely be DLC packs in the coming months, but the roster that you start out with is so big, you can mix and match any era and pit the biggest stars against each other as soon as the game boots up.

As great as the game looks, it sounds equally as bad. Sound effects are okay, as the bumps and thuds mimic the television experience. The music is fine, though depending on your persuasion you may not care for the tunes that blare during the menus, but each wrestler’s entrance theme is perfectly captured. The real issue with the audio comes whenever someone is taking into a mic. There is a jarring disconnect between the ambient sounds of the arena and the disconnected sounds of the ring announcer or promo. Just listen…

It sounds like it was recorded in a tin can. Same with the ring announcers. I know it’s hard to recreate the sound of an actual person speaking over an actual crowd, but surely some kind of audio mixing could have been done to better recreate the sounds of an actual WWE promo. If nothing else I would have preferred they just record a few of Enzo’s actual intros at NXT shows and just played them over the animations. It would have sounded much better. As it is, the audio is the one glaring weakness in the game’s otherwise high quality production.

The three headed monster of Cole, JBL and take your pick of Booker T, Byron Saxton or (and he is the one the game uses) King is faithfully recreated here, in that they seem barely interested in the match, spout platitudes and empty sayings and largely suck the life out of the atmosphere. The same disconnected audio problems previously mentioned are at work here too, but since they are talking nonstop you don’t notice it as much (I guess you get used to it). What you don’t get used to is how dumb their actual lines are. Again, you could mine the WWE tape library and snip-snip enough material to use in the game. It might have sounded disjointed but it would have sounded genuine, but why go through all that trouble when you can just spend an hour recording the trio reading their half-dozen lines.. Here the commentary is so bad you’d enjoy the game more if you just put on Pandora and kept 2K16 on mute. 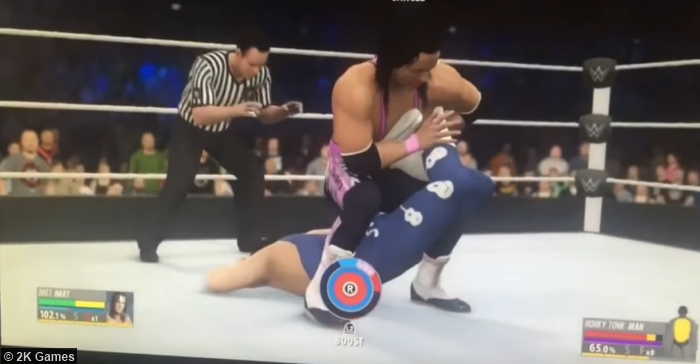 As previously mentioned, the problem with the gameplay is the “play” part. It’s not fun; it’s work. You start the match, generally, with a collar-and-elbow tie up, at which point you have to play a game of rock/paper/scissors, win or lose will determine if you take control of the match or spend the next third of it getting pummeled. If you win you can sort of start wearing down your opponents with some punches, kicks and grappling moves, but there’s no real rhyme or reason to what happens in the match. Sometimes you can have the advantage and then suddenly the computer will take over and might slip in a surprise pin or submission on you if you’re not careful.

When you have your opponent in a submision thinks get really frustrating. You have to play a stupid game with the right stick, where you play keep away with the opponent, trying to keep your red bar from being touched by your opponents blue bar. If they overlap the hold breaks. The problem is, the computer is much better at it than you are, so you will rarely hold submissions for long and will frequently be caught in one yourself, and usually will end up tapping after having much of the match go in your favor. 2K claims their new gameplay recreates the back and forth feel of a WWE match, but if it does, it does so at the cost of being any fun.

The game has a lot of different modes to play and there’s plenty to keep you busy, except for the fact that you’ll spend most of it in matches, and that’s the part where the game suffers the most. 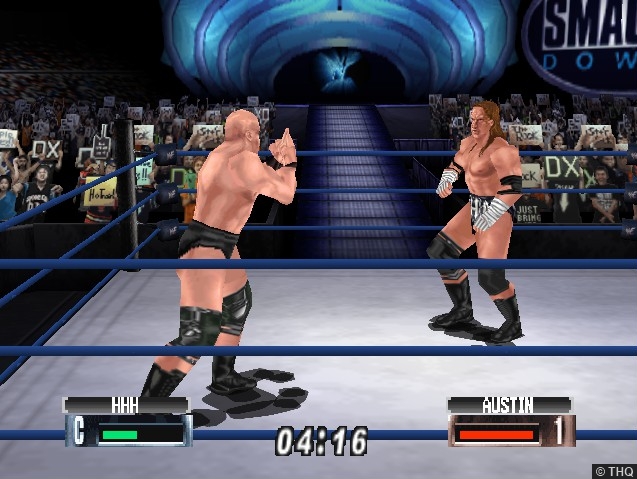 I confess that I am a lifelong No Mercy fan. I still play that game, and its easy to learn gameplay mechanics make it a great “pick up and play” experience. It’s creative suite is nothing compared to the depth that modern games have, but enough can be done to recreate a facsimile of almost anyone. Playing No Mercy (and the handful of other games with that engine by Aki) is a dream: One button grapples, one button strikes. Tap the button for weak, hold the button for strong. Weak is faster and harder to block/counter, strong does more damage but is easier to block/counter. Once you grapple you have five moves at your disposal (so ten when you count weak and strong grappling). And depending on which direction you point your character, you have ten different strikes to cycle through. Not to mention another ten grapples and strikes if you are behind your opponent, and another ten if your opponent is on the ground, and another ten if they are sitting up. Depth but simplicity was the name of those games, and its why you can go back to it after years and pick up right where you left off.  With 2K16, I have competed in several matches and still not been able to see even half of my performers moves. Not because there are so many, but because getting them to be used is so hard.

No Mercy lacks a lot of the bells and whistles that the 2K games have in spades, but what it has that 2K doesn’t is fun. Again: It doesn’t have fun. I can spend a lot of time with 2K16 (and I already have) but the vast majority of it is spent creating and tweaking models and arenas. When it’s time to actually compete, the game stops being fun and becomes work. There’s no bigger sin for a game than that. It’s just not fun to actually “play.”

Having said that, it could be that you like the new gameplay mechanics. In that case, pick up the game. The biggest problem with it (for me) is how it plays, so if you’re into it, you might find this to be one the best WWE games ever. For me, however, it’s a chore.

WWE 2K16 is gorgeous to look at and has a deep roster, but is horrible to listen to, and boring more often than not.