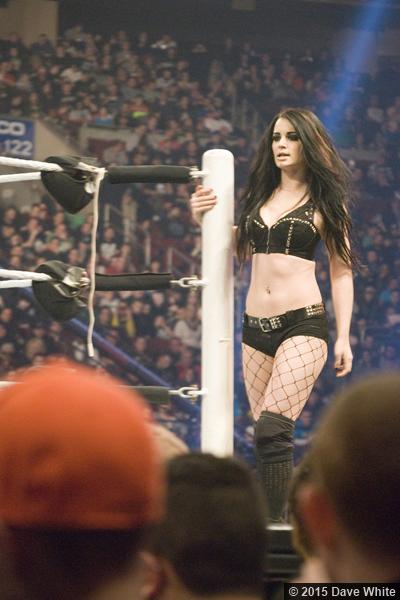 Before they face Dean Ambrose, Roman Reigns, and a partner of their choosing in a 6-Man Tag Match a week from Sunday at Night of Champions, SmackDown kicks off with The Wyatt Family as Bray Wyatt leads Luke Harper & Braun Strowman to the ring. Luke Harper says that, for those who are “lost”, Bray Wyatt’s words will show them the “way” before Harper hands the microphone to Wyatt. Bray says that Roman Reigns is a “smart man” and he does not care about any of the fans nor does he care what the fans think, saying that, if Roman is to one day fulfill his destiny and become the WWE World Heavyweight Champion, the fans will “bow” to him like “sheep”. Wyatt continues, saying “anyone but you” in regards to Reigns before Bray turns his attention to Dean Ambrose, saying that Ambrose is “unable to comprehend” that he is being “fed to the wolves”. Bray then says that Ambrose stands next to his “king like a servant should” before saying that The Wyatt Family and Ambrose & Reigns are the only ones who have business in their fight between families before Bray shows The Wyatt Family’s assault on Randy Orton on RAW after Orton was shown talking to Dean Ambrose & Roman Reigns backstage. Bray then says that he is the “serpent” and he is more than ready to “devour this world whole” before saying that “doomsday” awaits Ambrose & Reigns at Night of Champions and it does not matter how many people join Ambrose & Reigns, they are all “blind mice” who will never “escape the maze”. Wyatt continues, saying that he tried to “warn” Randy Orton, but Orton defied him before saying that tonight is a fresh night. Bray then has a warning for Jimmy Uso, saying that Jimmy has a “choice to make” and, if Uso makes the wrong decision, there will be a “price to pay”, mocking Reigns by saying “believe that”. Braun Strowman then removes his black sheep mask, saying that they “all fall down”, concluding with “run”.

In a rematch from RAW that was interrupted by Big Show, the opening match of the night would see “The Swiss Superman” Cesaro, with his ribs taped up, go one-on-one with The Miz. Injured ribs and all, Cesaro would withstand The Miz’s constant targeting of Cesaro’s mid-section, locking in the Sharpshooter, making Miz tap out to pick up the win.

After their match on RAW ended in controversy with Naomi & Tamina interfering, allowing Sasha Banks to roll Paige up for the questionable victory, the rematch would take place on SmackDown as PCB’s Paige, with Becky Lynch and #1 Contender Charlotte in her corner, would face Team B.A.D.’s Sasha Banks, with Naomi & Tamina in her corner. However, before the match begins, tensions would rise between PCB and Team B.A.D. with the referee struggling to keep an all-out brawl from breaking out, leading to the referee ejecting PCB’s Charlotte & Becky Lynch and Team B.A.D.’s Naomi & Tamina from being allowed at ringside, leaving it to a true one-on-one match! During the match, all hell would break loose between the two Divas as Paige would explode out of the corner with a Spear to Sasha Banks, pummeling Sasha before both Divas roll out of the ring to continue their fight. On the outside, Paige would toss Sasha into the ringside barricade before Banks responds with a toss of her own and, with the referee apparently unable to control the match, a second referee comes out to try and pull Paige and Sasha apart as the match is called off. As the two referees struggle to keep Paige and Sasha apart, their respective teammates rush out as Naomi & Tamina and Charlotte & Becky Lynch, leading to a pull-apart brawl between both sides with the main focus on trying to stop the fight between Paige and Sasha Banks. The two Divas would momentarily be separated before Paige rushes Sasha again and the brawl would resume before Team B.A.D. was finally able to separate themselves from PCB.

Ten nights before Dean Ambrose, Roman Reigns, and a partner of their choosing combat The Wyatt Family in a 6-Man Tag match at Night of Champions, “The Lunatic Fringe” and “The Big Dog” would join forces with Roman’s cousin Jimmy Uso to face WWE Tag Team Champions The New Day in a 6-Man Tag match on SmackDown. During the match, Roman Reigns would score with the Superman Punch to Xavier Woods before Roman tags in Jimmy Uso, but when Uso heads to the top rope, the lights go out and when they come back on, The Wyatt Family is on the stage and Braun Strowman has Jimmy Uso in his unforgiving grasp, choking Uso out with his triangle choke maneuver. Ambrose & Reigns would rush to the aid of Jimmy Uso but before they could get there, the lights go out again and, when they come back on, The Wyatt Family is gone, leaving their latest victim laid out on the stage. As Roman checks on his cousin and Ambrose is seething over just missing The Wyatt Family, Bray Wyatt’s voice is heard saying “they all fall down”.

With several WWE Superstars surrounding the ring, including Kevin Owens, Mark Henry, Neville, The Prime Time Players, The Dudley Boyz, Fandango, Heath Slater, Bo Dallas, Zack Ryder, Curtis Axel, The Cosmic Wasteland, R-Truth, Jack Swagger, Dolph Ziggler, The Lucha Dragons, & “The World’s Largest Athlete” Big Show, it was time for the main event as WWE World Heavyweight and United States Champion Seth Rollins would go one-on-one with Intercontinental Champion Ryback in a non-title, Champion vs. Champion Lumberjack Match where the Superstars on the outside would have the unenviable task of keeping the champions in the ring. During the match, Big Show would shove R-Truth out of the way on the outside before pulling Ryback out of the ring and sending the Intercontinental Champion in the barricade. This would raise the ire of Mark Henry, who gets a couple of shots in on Big Show before “The World’s Largest Athlete” fires back with a big Knockout Punch, leveling Mark Henry. Big Show then gets in the faces of some of the other lumberjacks and the Superstars back Big Show all the way up the entrance ramp, forcing Big Show to the backstage area as the match continues in the ring.

Shortly after this, Ryback lifts Seth Rollins up and over the top rope as Rollins lands on Dolph Ziggler, Jack Swagger, Neville, & The Lucha Dragons on the outside, taking out the lumberjacks. Meanwhile, on the other side of the ring, the remaining able lumberjacks would fight amongst themselves as Bo Dallas, Heath Slater, Adam Rose, & The Cosmic Wasteland would beat down the likes of Mark Henry, Fandango, Curtis Axel, & Zack Ryder. Then, as Kevin Owens watches from ringside neither helping nor hurting matters, the six lumberjacks would enter the ring to attack Ryback as Stardust hits the Queen’s Crossbow on the Intercontinental Champion before the rest of the lumberjacks re-enter the fray, sparking an all-out brawl between all of the lumberjacks! The Lucha Dragons would dive to the outside, taking out Bo Dallas and The Ascension before Neville takes Stardust to the outside, diving to the outside and taking out several lumberjacks. Once the ring clears, the match would continue with Ryback going to Shell Shocked on Seth Rollins, but with the referee’s back turned, Kevin Owens would pick his spot, pulling on Ryback’s foot and allowing Rollins to take advantage as Rollins hits the Pedigree on Ryback, pinning the Intercontinental Champion for the win.