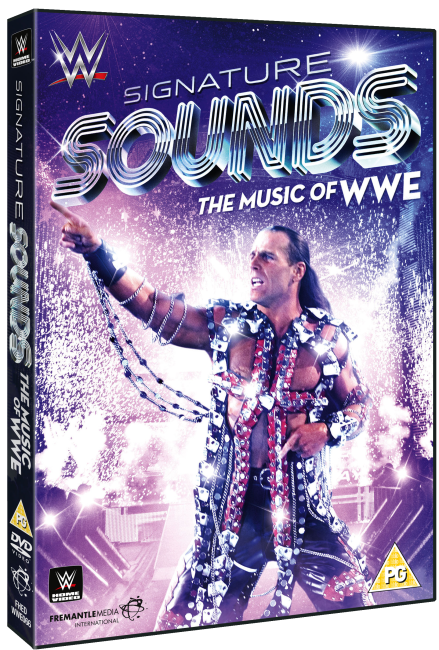 This is a fluff piece if ever there was one.

This started life as a Network exclusive and has now found its way on to DVD at a low price and with a few extras tacked on for good measure.

Essentially, it’s a sub-1hr countdown of what they claim to be the top 25 entrance themes in WWE history. Each track gets a quick explanation from Jim Johnson on how he came up with it and an equally quick comment from the artist in question.

That’s pretty much it.

Any list-based release is going to have someone complain about “this” being included or “that” being left out; it’s just the nature of opinions and we all have that theme that we just love that maybe nobody else does (Kona Crush, I’m looking in your direction), but some of the choices in this list are inexplicable in regards to who made the cut and who didn’t.

The top ten pretty much all deserve a spot on the list (although where is a debate for another day), but to have Prime Time Players (which I do think is a great theme), Fandango and Orton on there while Hogan, Savage, Demolition, Slick, THE MOUNTIE, Big Boss Man, Hart Foundation, The Fabulous Rougeaus, Ric Flair, Legion of Doom, Million Dollar Man, Rick Rude, Razor Ramon, Vader, Nation of Domination, New Age Outlaws, The Hardys, The Dudleys, Edge & Christian, Kane, APA (as simple as it was), Booker T, Eddie Guerrero, Kurt Angle, the nWo, Brock Lesnar, Matt Hardy V1, Al Snow w/ Head and Goldberg ALL miss out is ridiculous.

Sure, some of them started outside WWE, but they were all themes for those guys while in WWE too, so should have been eligible.

What comes across is that this isn’t the Top 25 themes in WWE history, it’s just “25 themes with input from Jim Johnson in WWE history – unless it was Jimmy Hart” and because of that, a lot of cracking entrance tunes are left by the wayside.

If you have the Network, watch it on there and if you don’t, then buy it if you have a spare £6.00 with literally nothing else to spend it on. The actual background discussions are genuinely interesting, it’s just grating when you see who was left off the list.

All in all, each theme doesn’t get enough time, so it should either have been a Top 10 with each one getting a minimum of 5mins or a longer running time to give each track a minimum of 5mins as some of them do leave you wanting to know more about the behind-the-scenes process.

Also, for shame in not mentioning that Ernest Miller had Brodus Clay’s theme first.