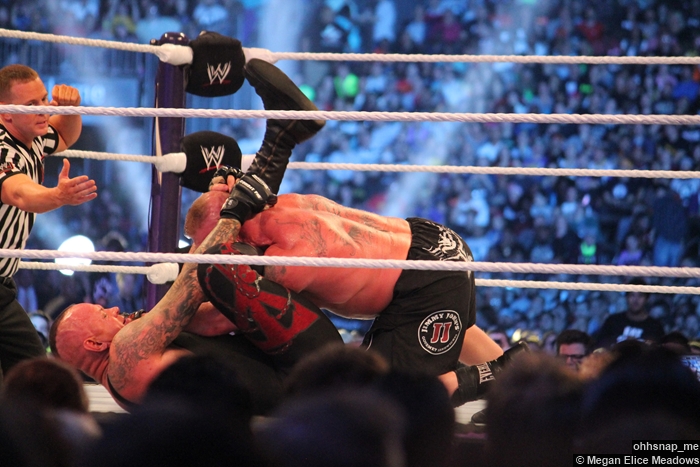 For the 28th year in a row, WWE would host “The Biggest Event of the Summer” as the four-hour extravaganza known as SummerSlam would come to you, live on the WWE Network, from the Barclays Center in Brooklyn, NY. In an action-packed, four-hour blockbuster of an event, possibly no match is more personal and more intense than the boiling feud between The Undertaker and “The Beast” who ended The Undertaker’s legendary undefeated streak back at WrestleMania 30, Brock Lesnar. In the lead up to a rematch that is sixteen months in the making and deemed “too big for WrestleMania”, Brock Lesnar and The Undertaker have tried to destroy each other at every opportunity and The Undertaker’s road to redemption began at Battleground last month when “The Phenom” made his shocking return to WWE, costing Brock Lesnar the WWE World Heavyweight Championship. The night after that on RAW, a knock-down, drag-out brawl would ensue between the two heated rivals with the WWE locker room, security, and even the local police having to get involved to finally stop the two Superstars from destroying each other. Now, after all the turmoil and after all the threats and promises of a “resurrection”, these two titans would collide at SummerSlam as “The Deadman” The Undertaker goes one-on-one with the one in 22-1, “The Beast” Brock Lesnar!

Ever since Bray Wyatt got involved in the Money-in-the-Bank Ladder Match and cost Roman Reigns the briefcase back in June, Roman Reigns has struggled to combat “The New Face of Fear” and, with Bray Wyatt reuniting with Luke Harper at Battleground, “The Big Dog” has recruited an old friend and a man he proudly refers to as his “brother”, Dean Ambrose. Together, the former Shield teammates have taken it to Bray Wyatt & Luke Harper in recent weeks and, at SummerSlam, these two “families” would square off in a tag team match with both sides looking to eradicate the other.

Throughout WWE history, there have been many actors who have stepped inside the ring for a bevy of different reasons from Seth Green to Hugh Jackman to Johnny Knoxville, but never has an actor stepped into the ring under such bizarre circumstances. For weeks now, the enigmatic Stardust has been on a mission to find a “hero” and, after Neville proved to not be Stardust’s fancy, Stardust would set his sights on actor Stephen Amell, who is famous for portraying The Green Arrow superhero on the TV show “Arrow”. Now what began as a heated Twitter feud will take to the ring at SummerSlam as Stephen Amell will step into a WWE ring to compete for the very first time as the man who portrays The Green Arrow will team up with the man who has mastered the Red Arrow, Neville, to face the team of Stardust and his new associate, the self-proclaimed “Cosmic King” King Barrett.

Since making his main roster debut, Kevin Owens has made enemies of just about everyone, repeatedly walking out on matches and even abandoning his tag team partners. However, one man who has taken issue with Kevin Owens’ behavior is “The Swiss Superman” Cesaro, who has raised the ire of the self-proclaimed “Prizefighter” by questioning Kevin Owens’ toughness and willingness to fight and, at SummerSlam, these two would go one-on-one in a match that could potentially steal the show.

A couple of months ago, WWE Principal Owner Stephanie McMahon ushered in a revolution in the Divas division, bringing Charlotte, Becky Lynch, and Sasha Banks up from NXT to shake up the Divas division and bring forth a Diva Revolution. It would not take long for alliances to be formed and, at SummerSlam, those alliances would square off as Team PCB, which consists of Paige, Charlotte, & Becky Lynch, Team B.A.D., which consists of Naomi, Tamina, & “The Boss” Sasha Banks, and Team Bella, which consists of Divas Champion Nikki Bella, Brie Bella, & Alicia Fox would wage war in a Divas Three-Team Elimination Tag Match! Which trio of Divas will emerge victorious and how will it affect the Diva Revolution?

Throughout both men’s careers, one thing has become abundantly clear, Randy Orton and Sheamus cannot stand each other. For years, “The Viper” and “The Celtic Warrior” have butted heads on numerous occasions over championships and just pure disdain and, at SummerSlam, these two former World Champions would collide again as Randy Orton would go one-on-one with “Mr. Money-in-the-Bank” Sheamus.

Ever since Lana left Rusev and aligned herself with her new man, Dolph Ziggler, Rusev has become obsessed with humiliating Lana at every turn, even dressing up his “new Lana” Summer Rae to look like his ex-girlfriend and having Summer use Rusev’s Accolade on Lana. However, after weeks of having to witness his girlfriend being humiliated in front of the world, Dolph Ziggler would return from a throat injury caused by Rusev to reunite with Lana to try and crush Rusev & Summer Rae. This has led to a match at SummerSlam as “The Show Off” Dolph Ziggler would compete for the first time in a month against “The Bulgarian Brute” Rusev with the Superstars’ respective ladies sure to be at ringside.

Also at SummerSlam, the Intercontinental Championship would be up for grabs as, in a match originally scheduled for Battleground, “The Big Guy” Ryback would defend the Intercontinental Championship in a Triple Threat Match against both The Miz and “The World’s Largest Athlete” Big Show where the first Superstar to gain a pin or submission will walk out as the Intercontinental Champion. Much like Ryback, The Prime Time Players would also have the odds against them as The Prime Time Players would defend the WWE Tag Team Titles in a Fatal 4-Way Tag Match against The New Day, The Lucha Dragons, & Los Matadores where the first team to score either a pin or submission will win the match and leave the Barclays Center as the WWE Tag Team Champions.