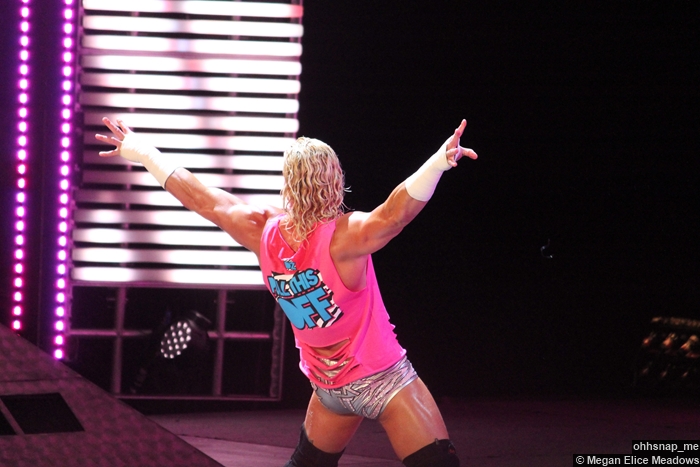 Three nights before he defends the Intercontinental Championship in a Triple Threat Match against both The Miz and Big Show at SummerSlam, the opening match of the night would see Intercontinental Champion Ryback square off with “The World’s Largest Athlete” Big Show in a non-title match. During a hard-hitting contest between the two big men, the match would spill to the outside and Ryback would send Big Show spine-first into the steel ring post before Big Show picks Ryback up for a slam, but “The Big Guy” would fight out of Big Show’s grip before blasting “The World’s Largest Athlete” with a huge Meat Hook Clothesline that sends both men crashing through the ringside barricade! With both Superstars lying amongst the rubble of the barricade, the referee would reach his ten-count and both nearly motionless competitors are counted out. After the match, WWE’s ringside physician would check on Ryback as the Intercontinental Champion appeared to take the worse of the collision.

Before The New Day and Los Matadores are part of a Fatal 4-Way Tag Match for the WWE Tag Team Championship that will also involve The Lucha Dragons and the defending champions The Prime Time Players, SmackDown would see all three members of The New Day face Los Matadores & El Torito in a 6-Being Tag Match. At the end of a unique match, it was Big E hitting a big splash on El Torito before Big E tags Xavier Woods in, letting Woods pin El Torito to pick up the win for The New Day.

After making his surprise return on RAW where he and Lana got the better of Rusev & Summer Rae, “The Show Off” would return to SmackDown as Dolph Ziggler, with Lana by his side, would address the fans before his match against Rusev at SummerSlam. Dolph says Rusev crushed his throat about a month ago but the worst thing about it all was sitting helplessly at home watching Lana be humiliated by Summer Rae and the Accolade. Dolph continues, saying that he had to come back so he and Lana could get revenge and they got a measure of that revenge on RAW. Lana says that they make a “great team” and she slapped Rusev and embarrassed Summer Rae before Dolph comments on Lana’s sense of humor. Dolph then calls Lana a “bona fide badass” and Lana says that Rusev can have his imitation Lana because Dolph gets to have the “real thing”. The couple then share a kiss in the ring before Rusev & Summer Rae interrupt the tender moment, coming out to the stage. Rusev says that he is going to show Dolph what “real pain” is at SummerSlam when he makes Ziggler “beg for mercy” in the Accolade, saying that Lana will suffer the same fate at the hands of Summer Rae. Rusev continues, saying that Dolph will see the pain on the face of Lana and only then will he know real pain. Ziggler interrupts Rusev, saying that his comeback begins at SummerSlam and he will leave the Barclays Center with Rusev’s girlfriend, the “real one”.

Before he teams up with “Arrow” star Stephen Amell to face Stardust and King Barrett at SummerSlam, Neville was in action on SmackDown as “The Man That Gravity Forgot” would go one-on-one with Bo Dallas. In the end, it was Neville hitting the Red Arrow, pinning Bo Dallas for the win. After the match, Stardust and the man now referring to himself as “The Cosmic King” King Barrett, saying that they are going to turn “green and red” to “black and blue” this Sunday at SummerSlam and Neville will be “permanently grounded” before saying “all hail The Cosmic King and Stardust”.

With the Divas Three-Team Elimination Tag Match this Sunday at SummerSlam, a representative of each team would square off on SmackDown as Team PCB’s Becky Lynch, with Charlotte in her corner, Team B.A.D.’s Sasha Banks, with Naomi & Tamina in her corner, and Team Bella’s Brie Bella, with Alicia Fox & Divas Champion Nikki Bella in her corner, would face off in a Divas Triple Threat Match. In the end, it was Brie Bella shoving Becky Lynch into Sasha Banks, knocking the NXT Women’s Champion off of the ring apron before quickly rolling up Becky, hooking the tights for the illegal advantage to pick up the win.

Then it was time for the huge main event as “The Big Dog” Roman Reigns and “The Lunatic Fringe” Dean Ambrose would team with “The Swiss Superman” Cesaro and “The Viper” Randy Orton to face the team of Bray Wyatt, Luke Harper, Kevin Owens, and “Mr. Money-in-the-Bank” Sheamus in an 8-Man Tag match with serious SummerSlam implications. At the end of a chaotic match, it was Cesaro hitting Kevin Owens with a springboard European uppercut before Sheamus blasts Cesaro with the Brogue Kick, which is followed by Randy Orton hitting “Mr. Money-in-the-Bank” with the RKO. Bray Wyatt then tries to hit Sister Abigail on Randy Orton, but “The Viper” counters before Bray shoves Orton right into Luke Harper, who blasts Orton with a kick to the face. Roman Reigns then hits the Spear on Bray Wyatt before Luke Harper takes out Roman with a kick, but Dean Ambrose would then spike Harper with Dirty Deeds, pinning Harper to pick up the win for his team. After the match, Dean Ambrose, Roman Reigns, Cesaro, & Randy Orton reunited in the ring to celebrate their victory over their respective SummerSlam opponents as Kevin Owens and Sheamus regroup on the stage, being stared down by the formidable team in the ring.