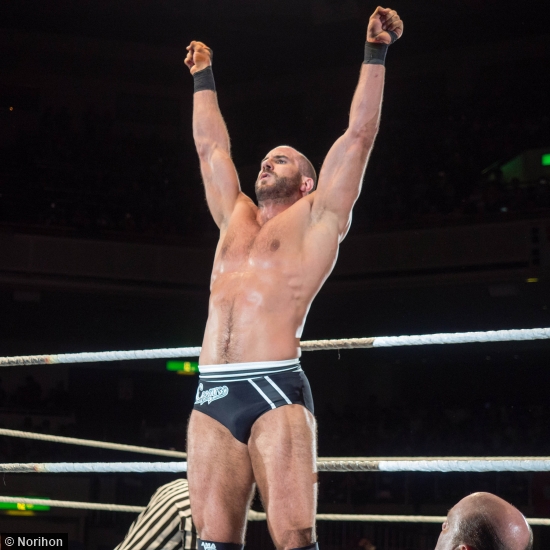 After coming up short in taking the United States Championship from John Cena in a grueling match on RAW that resulted in Cena suffering a broken nose, SmackDown kicks off with WWE World Heavyweight Champion Seth Rollins. The champion says that, throughout his career, all he has heard from the fans is “so what?”, saying that a man can only take so much. Rollins says that he reached his “breaking point” this past Monday night on RAW and John Cena was the “unfortunate victim” of his rage, saying that he beat Cena to the point that he had to go to the emergency room with a broken nose. The champion continues, saying that what he did to Cena was “gruesome”, but also “beautiful”, saying that he is an “artist”. However, Rollins is then interrupted by Cesaro, who makes his way to the ring, saying that Rollins goes “on and on” every week about how good he thinks he is. Cesaro then reminds Rollins that he tapped out to John Cena’s STF on RAW, but Rollins argues that he didn’t tap out, saying it was a “strategic move” because he has bigger things to worry about than the United States Championship. Cesaro then says that, since they are both in the ring, how about he makes Rollins tap out right now.

With that, a referee comes down to the ring and the match gets underway as “The Swiss Superman” Cesaro would go one-on-one with WWE World Heavyweight Champion Seth Rollins in a non-title match! Early on in the match, Kevin Owens would make his way to ringside to sit in as a guest on commentary. During the match, Cesaro would set Seth Rollins up for the Cesaro Swing, but that is when Kevin Owens would get involved, attacking Cesaro and ending the match by disqualification. Seth Rollins and Kevin Owens then stomp away at Cesaro before referees come out to break it up as Cesaro is left seething in the ring.

Four of the top tag teams in WWE would square off on SmackDown as The Lucha Dragons would join forces with Los Matadores, with El Torito in their corner, to face The New Day’s Big E & Kofi Kingston, with Xavier Woods in their corner, and The Ascension in an 8-Man Tag Match with WWE Tag Team Champions The Prime Time Players guests on commentary. At the end of a chaotic 8-Man Tag, it was Kalisto surprising Viktor with a roll-up, picking up the win for his team. After the match, The New Day would take issue with The Ascension, blaming Konnor & Viktor for the loss.

Backstage, Kevin Owens appears to be leaving the arena when Owens is stopped and informed that a tag team match will take place tonight as Kevin Owens will team with WWE World Heavyweight Champion Seth Rollins to face Cesaro and a partner of his choosing!

Two unusual Superstars would go one-on-one on SmackDown as “The Prince of Dark Matter” Stardust would face R-Truth. In the end, it was Stardust hitting the Queen’s Crossbow, pinning R-Truth for the win. After the match, Stardust tells R-Truth that he has “failed” the city before trying to put a Stardust mask on R-Truth. This would bring out Neville for the save, sending Stardust retreating into the crowd.