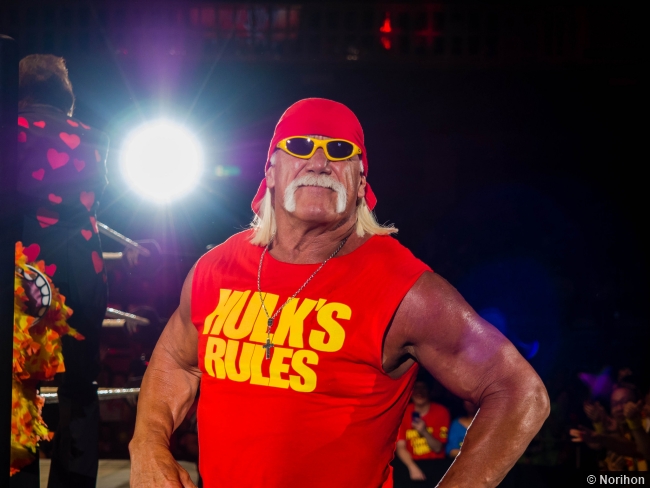 After WWE.com removed all references to WWE Hall of Famer Hulk Hogan yesterday (including his Hall of Fame profile and his listing as a judge for Tough Enough) amidst rumors of the release of a racist rant from several years ago. Earlier today, a transcript of the racist rant was released to the public and WWE was quick to distance themselves from Hogan, releasing an official statement on their website. The statement reads, “WWE terminated its contract with Terry Bollea (aka Hulk Hogan). WWE is committed to embracing and celebrating individuals from all backgrounds as demonstrated by the diversity of our employees, performers and fans worldwide.” This is the fourth time that Hulk Hogan has been let go by WWE and by far the most controversial.

The inexcusably racist rant was captured as part of a Hulk Hogan sex tape (which Hogan is suing Gawker.com over for releasing) and, while far too offensive to repeat, the rant involves Hogan discussing his daughter Brooke potentially dating an African-American man and Hogan goes on a tangent about this possibility which is not only heavily racist, but is also offensive towards his own daughter.

Several people sounded off on the racist remarks, including Hogan himself, who gave exclusive comments to People Magazine after the news broke, stating “Eight years ago I used offensive language during a conversation. It was unacceptable for me to have used that offensive language; there is no excuse for it; and I apologize for having done it, This is not who I am. I believe very strongly that every person in the world is important and should not be treated differently based on race, gender, orientation, religious beliefs or otherwise. I am disappointed with myself that I used language that is offensive and inconsistent with my own beliefs.” Hulk Hogan’s attorney has also stated that Hogan resigned from WWE despite WWE’s statement saying that Hogan’s contract was terminated.

Longtime colleague of Hulk Hogan and fellow WWE Hall of Famer Booker T also commented on the remarks via Twitter, “20 years ago I made a huge mistake by saying something I shouldn’t have on national TV. It’s 2015 and the n-word should be eradicated from the English language in my opinion, I am shocked by the statements made by Hulk Hogan. It’s unfortunate, but that’s something that he’s going to have to deal with.” WWE Superstar Mark Henry also weighed in on the incident on Twitter, saying “I’m disappointed in the comments made by Terry Bollea (Hulk Hogan). I’ve known Terry a long time as both a work colleague and as someone I consider a friend, I’m hurt and offended that he expressed his feelings in the matter and tone that was presented on the tape.” Henry also commended WWE for their handling of the situation, supporting the company’s termination of Hogan’s contract.

While a lot of people have spoken out against Hulk Hogan’s tirade, one man has come out in support of Hogan and that is NBA legend and former WCW competitor Dennis Rodman, who said the following on Twitter, “I’ve known @HulkHogan for 25 years. There isn’t a racist bone in that mans body.”

Hulk Hogan returned to WWE after a six year hiatus in 2014, appearing as the Host of WrestleMania 30. The Hall of Famer would then go on to make several promotional appearances for the company, as well as getting involved in the match between Triple H and Sting at this year’s WrestleMania before being named as a judge for Tough Enough earlier this year.

What do you think of WWE cutting ties with Hulk Hogan? Post your comments in the box below.