I’ve written eulogies before. I’ve written plenty of career retrospectives. Each one is different because each wrestler is unique. Their stories, their influence, and what kind of people they were outside of the ring naturally shapes what their legacy will be.

With some icons, their lives were controversial and when they die you have to kind of force yourself to reexamine them. Michael Jackson was the butt of so many jokes but when he died–the very day and from then on–he was revered as the pop icon he was/is. I guess it’s because, while they are alive, we are judging them in the moment, but when they die we immediately look at the sum total of their body of work. When you do that, it’s easier to say “yes but” and give credit where its due to a great artist who may or may not have been a great person.

That will not be necessary here.

Dusty Rhodes, the affectionately-dubbed “American Dream” has died, and his legacy will be just as positive as it was while he was yet living. He will be remembered today, on the day of his death, the way he was thought of yesterday, when he was still alive: As an icon of the industry, a kind soul, with a one-of-a-kind resume and a willingness to pass on his knowledge to future generations. He will be remembered for what he has always been: First a unique wrestling talent, then a wonderful creative force, and recently a quintessential “wise old man in the room” who was more than ready to help an upstart learn just what to say in his promo, just how to say it in her backstage interview, just the way to walk so as to exude charisma and ooze pizazz and just the way to act in order to make a special connection with the audience.

As a wrestler Rhodes was unique. He was the first “this guy doesn’t look like a wrestler” main eventer. In the late 70’s he had a few WWWF title matches with Superstar Billy Graham, pictured below: 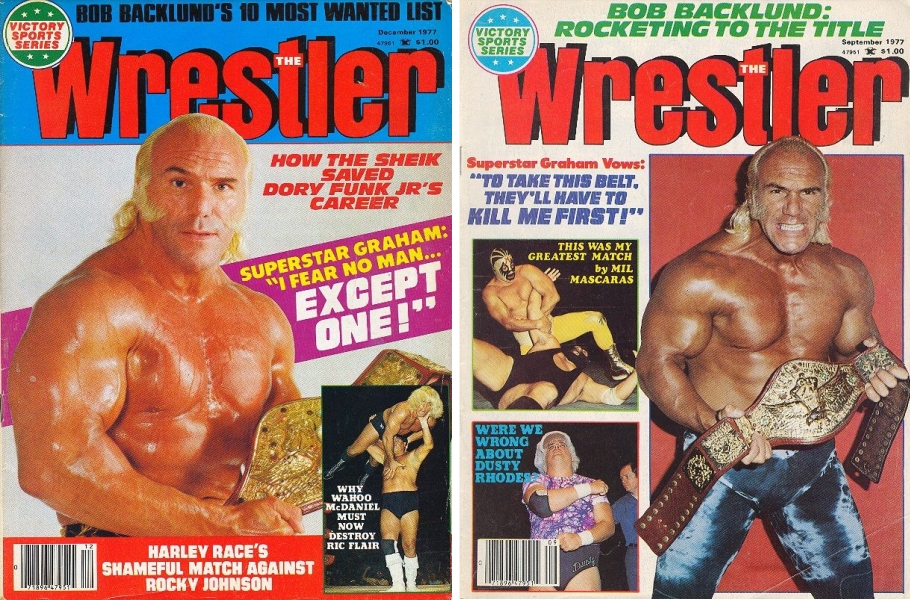 Meanwhile, this was what Dusty looked like back then: 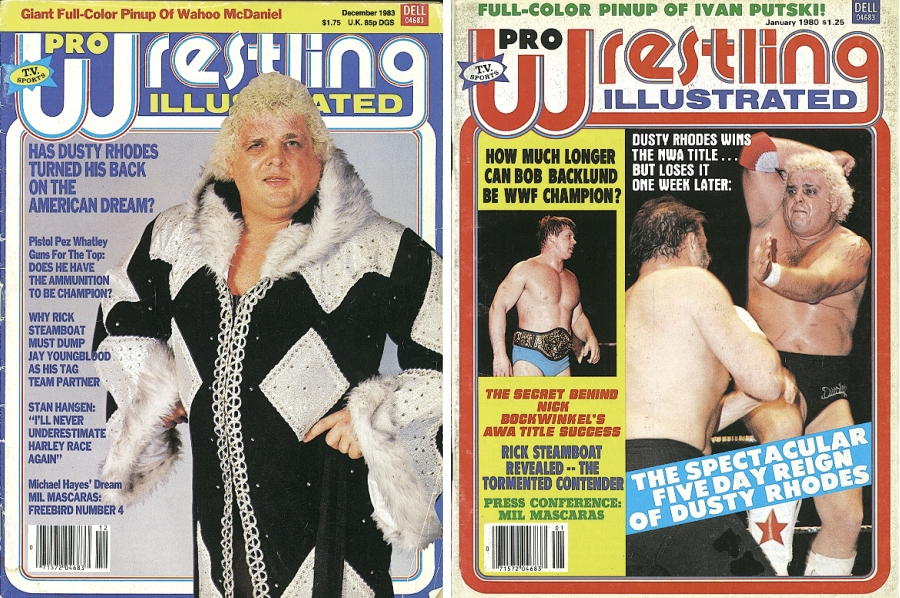 He was…plump…in an era where wrestlers were essentially body builders with a little bit of personality as a bonus. In fact that’s been the norm in every era of Pro Wrestling, and it’s the reason why guys like Mick Foley and Kevin Owens are such unique specimens (literally) and why it’s such a huge deal when someone who looks like that achieves success. Wrestling is a worked sport; you may be the most beloved superstar on the roster, but if the promoter doesn’t want you representing his company he can hold you back and keep you jerking the curtain. Dusty Rhodes should have been a curtain-jerking nobody, but through an untrainable, indescribable “it factor.” He was a headliner almost from the moment he laced up his boots.

His biggest claim to fame came as the top babyface for Jim Crocket Promotions (the spiritual forebearer to WCW).

With each title win, Dusty would celebrate his victory as one for the little guy, sticking it to the man. He was like Stone Cold, except in a more inspirational way. Starting in the mid-80’s Dusty Rhodes was the posterboy-opposition to the reign of terror that was The Four Horsemen. Although Dusty was a two-time champ before Flair won his first world title, an (and won it from Rhodes!) the story of Rhodes as the underdog was easily told: While Flair and his posse were limo riding, jet setting, high society-types, Rhodes was the middle class working man trying to earn a fair shot at the World’s champ. It was Rocky, except without the challenger ever earning a begrudging respect of the champ. Instead, Flair would make Rhodes’ life miserable. Many times it would appear that Rhodes had captured the Big Gold Belt only to have the decision reversed and the title remain with Flair, much to the sadness of the challenger and the vitriol of the audience. 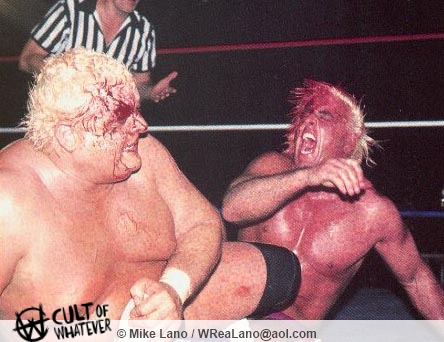 The most memorable moment in their historic rivalry would come after Ric Flair broke Dusty’s ankle. His time away left Jim Crocket Promotions without its hero, but upon returning, The American Dream cut one of the greatest promos of all time, en route to his incredible title win at The Great American Bash 1986 (which snapped Flair’s two year-long run with the championship).

As a booker, promoter and writer, Dusty Rhodes is credited with imagining many of the greatest concepts in the sport. War Games, The Great American Bash and Fall Brawl are just a few of his contributions to pro graps. On the other side of the coin, Rhodes was the brains behind the eponymous “dusty finish” where a title challenger seemingly wins the belt, only to have the decision reversed in a technicality. The idea itself is great booking when used sparingly, but it ended up being overdone and matches felt cheap as a result.

Still, many older fans look back on those days and reminiscence about the various ways a title change would be undone: the challenger wore a mask, the challenger accidentally backed into the ref, the challenger bled too much. And so on. I was talking recently with one older fan about dusty finishes in the 80’s and he said “It got to the point where I wouldn’t trust a title change until the champ was in his car driving home…and even then I was suspicious.” Overdone though it may have been, it became a hallmark of the era and gave the fans a euphoric reaction when the title finally did—for real—switch hands.

You only need to look at the statements made by some of wrestling’s biggest names in order to appreciate the impact Dusty Rhodes had, on them personally and on wrestling entirely. 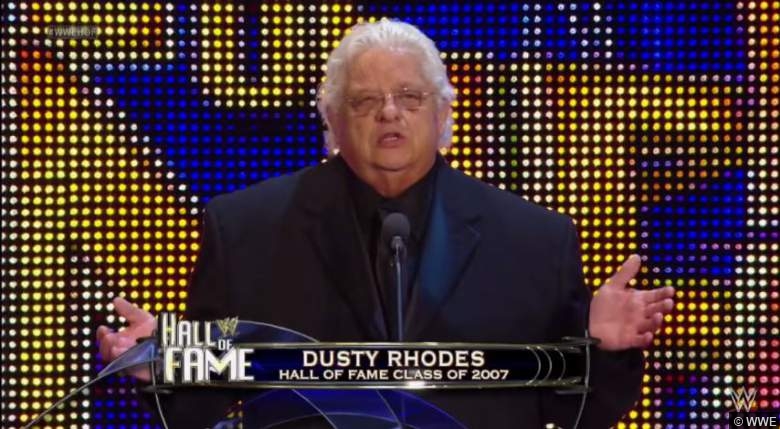 Paul Heyman, Steve Austin, Ric Flair, Harley Race, Triple H and others have all described Rhodes as a brilliant mind in wrestling, with an ability to think outside the box and come up with a concept or an idea that you didn’t even know you wanted, but once you saw it, you wanted to buy it.

When he returned to WWE in the mid-2000’s he served as a creative consultant and ambassador to the company. When NXT and the Performance Center launched, he worked closely with the rookies, helping them hone their promo skills. There’s a long list of guys in wrestling’s history who could cut an impassioned promo, but few were as real as The Dream. Some could have gone to Florida to work with the trainees, and there’s a long list of ex-wrestlers that fans have desired to see down there training, but their personal demons or inability to articulate how to hone the craft would have made the work unfulfilling and lacking. 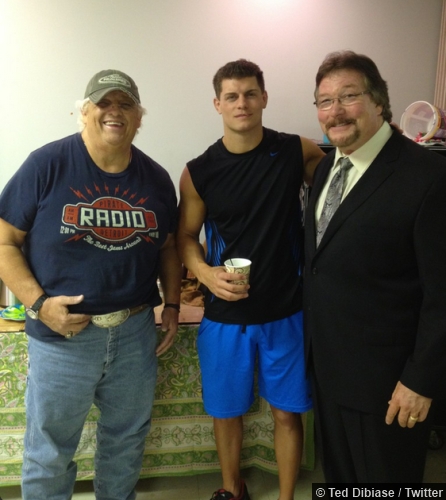 Dusty was the best man for the job of mentoring WWE’s future, and the work that he accomplished in his short time in that role is seen whenever you compare the mic skills of someone like Sami Zayn or Sasha Banks in 2013 as opposed to 2015. He wasn’t just great at it, he was great at teaching it. That’s a rare talent.

And now that talent is gone.

I rewatched that famous “hard times” promo (which was so resonating that struggling American workers would stop him on the streets to thank him for it) looking for some kind of angle or hook or even just a little inspiration to kick me out of the funk I’ve been in since hearing the news. I found two quotes that stand out to me:

The love that was given me, I will repay you.

His memory will live on, his kindness will not be forgotten, his generosity, inspiration and passion will always be celebrated. And above all, the love that we gave him—while he wrestled “for us” and struggled “for us” and eventually won “for us”—he repaid it to us ten fold.

There were two bad people. One was John Wayne, and he’s dead, brotha, and the other one’s right here.

So long to the American Dream.