Aether: The truth, the proof and the man behind the curtain

We continue to track the development of our championed first original Steampunk inspired movie, and things have come along quite some way since we last caught up with the team behind the vision. The complete final proof concept has been produced and Drew Hall and his team are out there banging down the executive’s doors with their baby on full marketing push-a-go-go! Here’s what they’re getting as an entree, but we’re giving you a nice heavy main course to get stuck in to. Check out the video, then dive right in to Drew Hall’s thoughts, ideas, plans and future vision for the Aether’verse! It’s going to be quite some ride…

What do you think? We’d love to hear your views. But there is one man who would like to hear them more we think; Drew Hall, the man pulling the cogs and levers behind the big emerald curtain. We caught up with him and asked him the questions you wanted us to ask.

As we mentioned in our recent article, there is a real lack of true steampunk works, in the movie genre at least. The movement is no doubt huge, and is prevalent across fiction, fashion, video games and even advertising to a certain extent. Why do you think we’ve been unable to capture the true essence of the genre, and how are you hoping Aether will fill this gaping chasm?

About 6 years ago I had a script called “Lightning in the Bottle”, which was a Tesla inspired/parable short film.  In doing research I came across steampunk and immediately fell in love with the genre.  The reason being is that steampunk has that romantic adventurous feel akin to the movies and stories I grew up watching/reading.  Like Star Wars, Raiders, or other pulp works there is little that is over explained, thus allowing the reader’s/viewer’s imagination to run wild with exploration.  In some ways we now live in this “reality” era, where everything in a movie or book needs to be explained with pseudo-science (Metachlorians), yet the better answer to me is the beauty of the mystery.

So Aether is steampunk inspired science fiction set in a fictional world.  The first episode of the series takes place on a tiny island called Deos.  The Aether’verse is not classical steampunk in its origins – i.e. it’s not entirely a victorian inspired society – albeit the tech, design, and interactions of one of the races is very much classical steampunk.  But there are two other groups in the film, that we feel touch upon the other sub-genres within the steampunk community.  The people of Specter are more like that weird west sub-sect.  Their clothing, gear, and livelihood has this cowboy-esque vibe to it – who doesn’t love a gunslinger?  The last race is the Bruewen, who are more or less the equivalent of Mad Max’s wasteland warriors, but set in world where Victorian tech/design was the leading primary aesthetic.  So you won’t see a bunch of rubber tires converted to armor, but you might see the spade of a shovel as a pauldron.

The reason we haven’t seen a tremendous amount of steampunk motion media on a grand scale is that it is a completely original genre.  Even if it were adapted, you still have to build the world in which the story takes place, and in many cases, period films are very expensive.  I also believe it can be attributed to what I mentioned earlier with the romantic side of steampunk.  It is very much a genre that thrives on creative exploration, which in the business world can be risky. 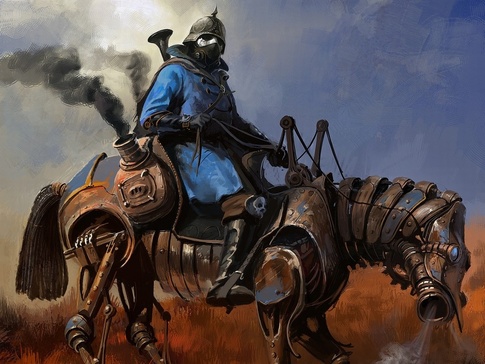 With so many heavy hitters already involved with the project; Alex Funke, David L. Snyder, Kim Bailey, Scott Robinson and Robin Matthews, is it the hope that the the incredible talent on-board will then attract further creative individuals towards the project?

Producer Scott Robinson and Co-Director Horst Sarubin really brought the creative team together.  Both of them have a tremendous amount of experience and therefore, a series of connections, which led to the assembly of the Avengers…I mean creatives.  Scott has worked with David and Robin in the past so when he jumped on board the film, he immediately called them and sent a script their way.  It was an easy sell, as the film plus the way Scott, Horst, and myself work is a very collaborative process – thus allowing creatives to explore the world with us.  Meanwhile, Horst had been working with Alex in New Zealand on The Hobbit, so when it came time to talk DPs, he immediately put Alex’s name on the table.  Not really a hard sell to Scott and I – who hasn’t been influenced by Alex’s work (really who hasn’t been influenced by all of the creative team’s work).  Once David came to the office and we hung out a bit, he knew that his friend Kim should be involved – I’m not gonna lie, I geeked out when talking to David, but when you have me, Kim, and him in a room it is a full on nerdgasm.  So much science fiction history and experience with those two.  In post production, we are very fortunate to have Chris Ward doing the sound design.  Chris was nominated for an academy award for his sound editing work on The Hobbit trilogy.  He’s so much fun to work with.

I know I’m taking a long way to answer your question, but I think the explanation of creatives on board is a tell tale sign of things to come.  The stories within the Aether’verse are endless.  The creative design opportunities are endless and open dialog to make the world better is highly encouraged.  I am certain when casting begins we will find ourselves with a robust group of brilliantly talented actors/actresses who will find the same sort of appeal.

With the announcement of the Aether Prologue Comic Book Series, is this the opportunity to introduce a potential audience to the world of Aether and its inhabitants via a different medium? Is the comic book series true to the visuals we are likely to see on the big screen? How do you think  the comic book industry, especially independent publishers, are now pushing the boundaries of science fiction and fantasy?

I’m a huge Star Wars fan and I enjoyed the EU books that followed episode VI, so when Scott asked if we were interested in a comic book – Horst and I both were immediately on board.  I grew up reading comics and I still make my journey to the store on Wednesdays to pick up issues.  The only caveat I had to making an Aether’verse comic was that I wanted it to be an extension of the story, not an adaptation.  So with the Aether: Prologue comic series we will unfold the events 12 months prior to the story in the first film.  In fact, there are some interesting “origin” elements in the comic series that are exclusive, but on screen will have direct ties.  The opening of the film features a character named Kualo, returning from somewhere, which is a fine introduction, but if you’ve read the books, you know exactly what he just went through – and why his journey back to the floating city of Wavelinde is so important.

The visuals and story elements in the Aether: Prologue comic series are approved by me; however, the aesthetics are not 100% what will be on screen, because it is an artistic adaptation of our creative vision.  Again, it’s close, but I love to collaborate with artists and I enjoy seeing them connect to an idea, adopting it as if it were their own.  The team at Bluewater is amazing.  I work directly with the writer on making sure that the story does adhere to the rules in the Aether’verse, but again we allow some interpretation for the artists.

Indie publishers can take the risks on new IPs that others might steer clear from – again I understand both sides, but who doesn’t love to see the “new” guy/gal rise up.

With such huge support already shown by fans of the genre why have you decided to avoid raising funds to further develop Aether through the crowdfunding platforms, like Kickstarter for example?

The truth behind not using a kickstarter is that I don’t know if we could raise enough money to tell the story the way we feel it should be told.  As an indie, ironically, we would have to alter the story upon seeing what our final budget numbers would be – that may not be a bad thing, but the beauty of Aether: The Rise of Specter is the richness of the world.

So in many ways we need the support and expertise of a studio partner to truly put the best version of Aether, as it is written, on the big or small screen.  Sometimes the big shops get a good bit of flak for their creative choices, but they also have a tremendous amount of experience, intuitive competence, and access to take a story and really let it live, as the director/author intended.  We see any venture as an opportunity to help make the Aether’verse come alive as an opportune one.

Since we own the IP, we have discussed creating a web series within the Aether’verse that we would like to get crowdfunded.  This unique story would explore characters not featured in Aether: The Rise of Specter – so it would be yet another story meant to compliment the Aether’verse.  I’d ask, is that something supporters would want to see?

Is the world of Aether truly within reach of an independent team, or do you see this eventually being studio led in the future? Are you concerned it will be difficult to retain the original concept if it does get adopted by one of the big boys?

I kind of touched on this earlier, but I think it can work both ways.  It is challenging as an indie to secure the top tier cast at times – which as a business increases the risk on return.  Whereas, a studio, has access and a reputation to truly help explore the depth of the casting process.  The great thing about the Aether’verse is that it is, and forever will be, hinged upon the support of the early adopters/fans.  We’re doing everything we can to make something that the Aether’verse family will be proud of, but as I said, it still hinges upon their support.  The more shares, likes, tweets about Aether, the greater the opportunity we all have to see the world get created.  If via the tremendous outpouring of support WE ALL get a shot at making this a studio quality film, then I’d say ‘We’re big damn heroes’.  WE elevated a dream to a reality, that’s truly a thing of beauty.

We’ll be checking up on Aether’s elevation from dream to reality over the coming months. Hopefully the team will be providing us with lots of juicy material for you guys, and you can be sure to see it here very soon indeed. Are we really going to see or dream come to reality? Can Steampunk finally hit the big screen with a bang? We certainly hope so…