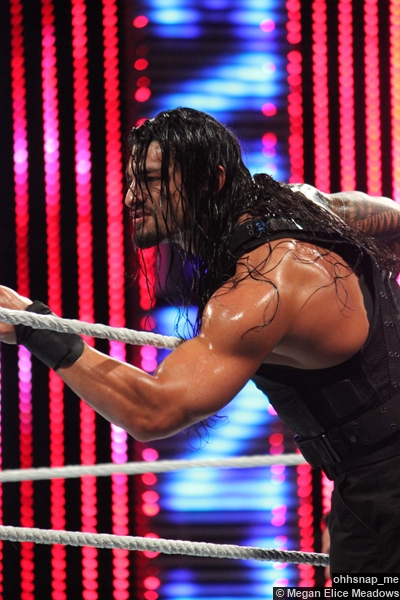 For the first time since the chaotic Fatal 4-Way Match for the WWE World Heavyweight Championship at Payback that ended with Seth Rollins leaving as the WWE World Heavyweight Champion, SmackDown kicks off with “The Big Dog” Roman Reigns. Roman says that he can chase Seth Rollins around each and every week, but he knows that it’s never going to be a fair fight with J&J Security always around. Reigns then says that it’s time that he starts thinking with his “head” and not with his fists” before making the huge announcement that he is officially putting himself in the Money-in-the-Bank Ladder Match at next month’s WWE Money-in-the-Bank event, vowing that he will be the next “Mr. Money-in-the-Bank”. “The Lunatic Fringe” Dean Ambrose then makes his way to the ring, saying that he won’t be reaching up for a future opportunity at the WWE World Heavyweight Championship because, come WWE Money-in-the-Bank, he will already be the champion. Roman gives Ambrose credit for outsmarting Seth Rollins on RAW to get a title shot, but asks Ambrose to please come up with an “exit strategy”.

The Authority’s Director of Operations Kane then interrupts, saying that Ambrose might have gotten one over on The Authority, but The Authority “always wins”. The Director of Operations then says that, as far as he’s concerned, Roman Reigns is not a part of the Money-in-the-Bank Ladder Match. Claiming that it has nothing to do with “personal biased”, Kane says that Roman lost at WrestleMania and Roman lost at Payback, saying that the only thing that Reigns has earned is his spot at the “back of the line”. Kane then says that the only way that Reigns will ever get another title opportunity is if Roman proves it to him. Ambrose then chimes in, calling Kane the “redheaded stepchild of The Authority”, asking if Kane eats from a bowl like the “lap dog” that he is. The Director of Operations responds by putting Ambrose in a match against Bray Wyatt with Ambrose commenting that was the match he wanted anyways. Kane then addresses Roman Reigns, saying that he doesn’t have anything for Reigns tonight so Roman should spend the evening “reflecting” on his “failures”, giving Roman the night off. Reigns then says that he is going to be keeping an eye on Kane and he will make sure the Director of Operations does what is “best for business”.

After making her return on RAW where she seemingly came to the aid of Divas Champion Nikki Bella only to attack the Divas Champion as well, “The Diva of Tomorrow” Paige would make an appearance on SmackDown. Paige says that one of the greatest moments of her career was when she won a battle royal to become the #1 Contender for the Divas Title in her home country of England, but thanks to a post-match attack from Naomi, her glory was “short-lived”. Paige says that Naomi took what she wanted and she can admire that, saying that Naomi found a “boyfriend” along the way in Tamina. Paige continues, saying that, by taking what she wanted, Naomi also took what rightfully belonged to Paige. Paige then says that the Divas Championship belongs to her and the entire Divas division belongs to her. This brings out Naomi & Tamina as Naomi says that she deserves to be the top Diva in WWE, saying that all Paige is good at is “screaming”. Naomi continues, saying that Paige doesn’t know what it’s like to “struggle” or be “overlooked”, saying that Paige earned a Divas Title shot on “day one” and Paige didn’t “deserve” it or “earn” it. Naomi then says that you can’t wait for opportunities, you’ve got to stand up and “take them”, saying that she attacked Paige last month because she is more “deserving” of being the #1 Contender, telling Paige to not take it “personally”.

Paige responds by telling Naomi & Tamina that, in one year, she has done more than both Naomi & Tamina have done in their entire careers. Paige continues, saying that there’s more to being a WWE Diva than just “athleticism”, saying that you also have to have a “personality”, something that Naomi does not have. Paige then says that what Naomi does have is “excuses”, telling Naomi to “get over it” and get over herself. This fires Naomi up as Naomi says that she is about to “run over” Paige and anyone else who gets in her way, saying that her and Tamina are about to “clean house”. With that, Naomi & Tamina rush the ring and, while Paige briefly holds her own, the numbers game would overwhelm Paige before Divas Champion Nikki Bella makes the unexpected save. Nikki takes out Tamina on the outside as Paige delivers a kick to Naomi in the ring, but just as Paige is about to deliver the Ram Paige to Naomi, Nikki Bella enters the ring and blasts Paige, leaving Paige lying with the Rack Attack in a measure of payback from RAW. This leaves Divas Champion Nikki Bella as the Diva standing tall in the middle of the ring.

Less than two weeks before he is one of the six participants in the Elimination Chamber Match for the vacant Intercontinental Championship at WWE Elimination Chamber, R-Truth would go one-on-one with a familiar foe in Stardust. In the end, it was R-Truth throwing one of Stardust’s glove up in the air, distracting Stardust just long enough for R-Truth to hit the Lie Detector, pinning Stardust for the win.

Following a loss to The Ascension on the Payback Kickoff, The Mega Powers would be in action on SmackDown as “Macho Mandow” and “Axelmania” Curtis Axel would face the team of Heath Slater & Adam Rose, with Rosa Mendes in their corner. In the end, it was Curtis Axel hitting the Axelmania Leg Drop on Heath Slater, pinning Slater for the win.

Then it was time for the main event as, in a rematch from RAW, the #1 Contender for the WWE World Heavyweight Championship at WWE Elimination Chamber, “The Lunatic Fringe” Dean Ambrose, would go one-on-one with the self-proclaimed “New Face of Fear” Bray Wyatt. During a hard-hitting match between the two unhinged Superstars, Bray Wyatt and Dean Ambrose would take each other out with a double clothesline to each other. This is when WWE World Heavyweight Champion Seth Rollins and J&J Security would come out, ready to ambush Dean Ambrose. However, making good on his promise to Kane earlier in the night, Roman Reigns intervenes, catching Jamie Noble with an uppercut before leaping off of the steel steps, catching Joey Mercury with the Superman Punch. Seth Rollins would take this opportunity to get far away from the ring as, back in the ring, Dean Ambrose delivers a right hand to Jamie Noble. Then, with the referee trying to get Noble out of the ring, Roman Reigns would take advantage of the referee’s back being turned, catching Bray Wyatt with the Superman Punch from the outside. This would give Dean Ambrose the opening he needed, spiking Bray Wyatt with Dirty Deeds and pinning Wyatt for the win. As Roman Reigns stands at ringside with a smile on his face, Dean Ambrose turns his focus to Seth Rollins on the stage as champion and challenger stare each other down, sending unheard threats to each other.