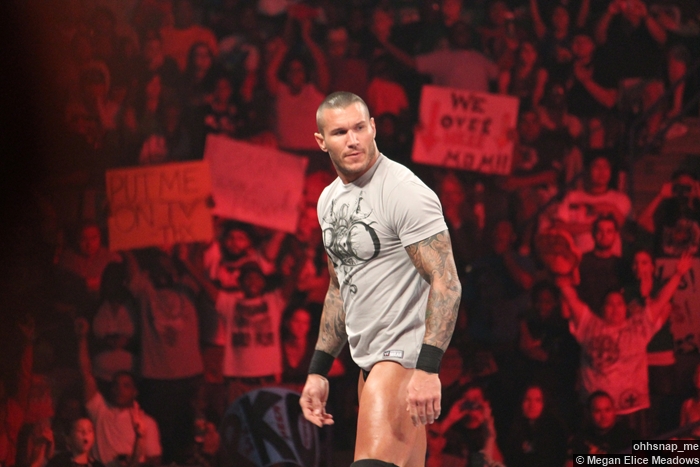 After successfully avoiding the wrath of Brock Lesnar on RAW and inadvertently causing Lesnar to assault the entire RAW commentary team, as well as a cameraman, before “The Beast” was indefinitely suspended by Stephanie McMahon, SmackDown kicks off with the new WWE World Heavyweight Champion Seth Rollins, who is flanked by J&J Security, The Authority’s Director of Operations Kane, and the winner of the Andre The Giant Memorial Battle Royal, Big Show. The new champion first reminds everyone of his historic Money-in-the-Bank cash-in at WrestleMania, where he turned the one-on-one main event for the WWE World Heavyweight Championship between Roman Reigns and then champion Brock Lesnar into a Triple Threat Match for the title, delivering the Curb Stomp to both champion and challenger before pinning Roman Reigns to become the new WWE World Heavyweight Champion. Rollins then says that, at WrestleMania, he solidified himself as the “new face of WWE” before saying that, after his title win, he flew all the way across the country for an appearance on The Today Show before flying all the way back across the country to appear on RAW, where he found out that Brock Lesnar was demanding his championship rematch. The champion continues, saying that he was “jet-lagged” on RAW and, while Brock Lesnar deserved his rematch, Monday night was just not his night. Rollins then says that, if Lesnar didn’t “lose his mind” and attack announcers and a cameraman, then they could have had their rematch tonight, but Brock Lesnar got himself indefinitely suspended, saying that Lesnar got what he “deserved”.

The WWE World Heavyweight Champion is then interrupted by Randy Orton, who says that he “remembers everything”, saying that he almost took Seth Rollins’ head off with an RKO at WrestleMania before Rollins cashed in his Money-in-the-Bank contract later that same night. Orton then says that he also remembers that he never got his rematch for the WWE World Heavyweight Championship from when he lost the title at last year’s WrestleMania, saying that, with Brock Lesnar’s indefinite suspension keeping “The Beast” from getting his rematch for the title, that puts Orton at the top of the list of the challengers for the WWE World Heavyweight Championship! The brazen champion declares that, as the champion, he is the only one who decides who gets a shot at the title and when they get a shot at the title. Orton says that Rollins has “never” done anything by himself before calling J&J Security a couple of “spineless sewer rats” and saying that Kane & Big Show “were monsters”, but now they are “lap dogs” for The Authority. “The Viper” then says that Big Show at least won the Andre The Giant Memorial Battle Royal at WrestleMania before asking what Kane did at WrestleMania, saying that he didn’t even see Kane at “The Show of Shows”. Orton then asks what the Director of Operations even does, saying that Kane went from the “big red monster” to “Little Red Riding Hood”! Kane then takes the microphone, saying that he has “plenty of power” before putting Randy Orton in a match against Big Show later in the night, saying that, if “The Viper” can beat Big Show, then maybe The Authority will “reconsider” Orton’s request for a title match.

Per the orders of The Authority’s Director of Operations Kane, the opening match of the night would see “The Viper” Randy Orton square off with the winner of the Andre The Giant Memorial Battle Royal Big Show, with WWE World Heavyweight Champion Seth Rollins, Director of Operations Kane, and J&J Security in his corner. In a short match, Randy Orton was quick to take control of the match, hitting “The World’s Largest Athlete” with his signature DDT, but with Orton ready to deliver the RKO, Kane and J&J Security attack Orton, ending the match by disqualification. With Kane and J&J Security doing the hard part, Seth Rollins would enter the ring and “The Viper” would get a few shots in on the champion before Kane puts Orton down with a chokeslam. As Seth Rollins makes a quick escape, Ryback rushes to the ring to make the save as Orton hits the RKO on Joey Mercury, Ryback hits Shell Shocked on Jamie Noble, and Orton tops it off with an RKO to Kane! Randy Orton & Ryback then stands tall in the ring, having sent a message to WWE World Heavyweight Champion Seth Rollins, who retreated to the safety of the stage.

The Divas were in action on SmackDown as Naomi went one-on-one with Natalya with Divas Champion Nikki Bella and her sister, Brie, guests on commentary. In the end, it was Naomi hitting a unique headscissors DDT on Natalya, pinning Natalya for the win.

Backstage, WWE World Heavyweight Champion Seth Rollins meets up with The Authority’s Director of Operations Kane as Rollins is all smiles, thinking that Kane was only joking about considering Randy Orton for a title shot. Kane reveals that he is seriously considering giving Orton a shot at the title, commenting that a match between Seth Rollins and Randy Orton for the WWE World Heavyweight Championship at Extreme Rules sounds “really good” to him. This puts a look of concern on the champion’s face and Kane asks if Rollins is concerned that he might lose to Orton. Rollins denies the notion, telling Kane to not let what Orton said get to him, saying that Kane is “smarter” than Orton. Kane responds by telling the champion that he is “better” than Orton. Rollins then says that “this stinks”, but when Kane argues, the champion clarifies that the office smells terrible. A disgusted Seth Rollins then leaves the office before a toilet flushes and Kane is face-to-face with Dean Ambrose. Ambrose compliments Kane on the toilet paper and other luxuries in the bathroom, but the Director of Operations is not amused and, as punishment for Ambrose using Kane’s “executive bathroom”, Kane puts Ambrose in a match against the man who put “The Lunatic Fringe” through a ladder at WrestleMania, Luke Harper. However, Ambrose seems fine with this ‘punishment’, even thanking Kane for the match!

After attacking hiss now former personal assistant Damien Mizdow on RAW, The Miz was in action on SmackDown, going one-on-one with R-Truth. In the end, it was The Miz hitting the Skull Crushing Finale on R-Truth, pinning R-Truth for the win. After the match, Damien Mizdow would get his payback, rushing the ring and hitting The Miz with the Skull Crushing Finale, standing over The Miz and soaking in his newfound independence!

Cena is then interrupted by the arrival of the former champion, Rusev, along with Lana. Lana says that what happened at WrestleMania was a “travesty”, saying that Cena is “half the man” that Rusev is. Lana tries to continue, but Rusev asks for the microphone, looking at Lana and saying that he “did not lose” at WrestleMania. Rusev then claims that he is still “America’s champion” and he is still a “Russian tank”, calling Cena a “coward” and saying that America is “Rusev’s country” and they are all living in “Rusev’s world”. Rusev then orders Cena to “surrender” before Cena says that Rusev did lose at WrestleMania, daring Rusev to come down and fight him. Rusev then comes down to ringside, saying that, at Extreme Rules, all Cena is going to see is this. Rusev then aggressively waves the Russian flag at ringside before pointing above the ring for the Russian flag to unfurl. However, nothing happens and Cena instead points above the ring as the American flag unfurls above the ring, enraging Rusev! Cena then says his own Pledge of Allegiance, pledging to kick Rusev’s ass at Extreme Rules! Cena then holds the United States Title high as a red-faced Rusev glares at the new champion.

Per the orders of The Authority’s Director of Operations Kane, “The Lunatic Fringe” Dean Ambrose would go one-on-one with Luke Harper on SmackDown. During the match, the fight would spill to the outside with Luke Harper sending Dean Ambrose over the ringside barricade. Harper would then expose the announce table, but Ambrose would fight back, blasting Harper with a right hand. Ambrose then goes for a powerbomb on Harper, but Harper counters, twice sending Ambrose back-first into the steel ring post before putting “The Lunatic Fringe” through the announce table with a huge powerbomb! Harper then threatens referees at ringside before Harper is finally escorted away from the scene. Referees and medical personnel then come out to help Dean Ambrose to the back.

Before facing Daniel Bryan in the main event, Sheamus would explain his actions on SmackDown. Sheamus says that he attacked Daniel Bryan and Dolph Ziggler on RAW because he “can”. Sheamus continues, saying that he sat at home watching RAW and SmackDown, wondering “where have all the real men gone”. Sheamus then calls Bryan and Ziggler two “vertically-challenged runts” before saying that he is not there to make them “smile”, he is there to crush their “hopes and dreams” and he will not rest until he puts every one of their “little underdogs” out of their “misery”.

Then it was time for the main event as, after both he and Dolph Ziggler were attacked by the returning Sheamus on RAW, new Intercontinental Champion Daniel Bryan would go one-on-one with “The Celtic Warrior” Sheamus in a non-title match with former champion Bad News Barrett a guest on commentary. During the match, Sheamus would go for the Five Beats of the Bowery on Daniel Bryan, but Bryan would catch the arm of Sheamus before turning around and delivering several headbutts to Sheamus. “The Celtic Warrior” would then shove Bryan off of the ring apron to the floor and, when the Intercontinental Champion stands up, blood is pouring down the forehead of Daniel Bryan as a result of the headbutts to Sheamus. With the referee’s back turned and Daniel Bryan nearly unconscious on his feet, Bad News Barrett was quick to strike, getting up from his seat at ringside to blast a helpless Daniel Bryan with the Bull Hammer Elbow before quickly sitting back down! The ringside doctor tries to tend to Daniel Bryan on the outside and Sheamus tries to drag the lifeless Bryan into the ring before giving up and re-entering the ring, taking the count-out victory over the Intercontinental Champion. As Sheamus walks out as the winner, the ringside doctor checks on the bloody Daniel Bryan, cleaning the wound on the champion’s head.