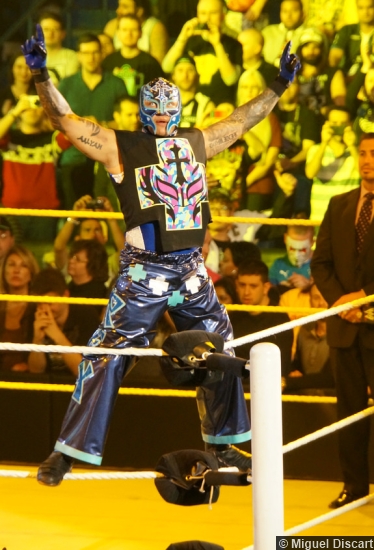 As reported by the Wrestling-Online Newsletter on Thursday after WWE subtly moved his profile to the “Alumni” section of WWE.com, former WWE and World Heavyweight Champion Rey Mysterio (Oscar Gutierrez) is no longer contracted to WWE as the high-flyer’s contract expired on February 26 and both parties opted not to renew. This brings to close contract negotiations between WWE and Mysterio that have been on-going for at least a year, ending Mysterio’s thirteen-year tenure with WWE. After achieving notable success in the now defunct ECW and WCW, Rey Mysterio would arrive in WWE in 2002, eventually forming a tag team with Edge and nearly becoming the first WWE Tag Team Champions. After only a year with WWE, Mysterio would win the Cruiserweight Championship in May of 2003. Combined with his five reigns as Cruiserweight Champion in WCW, Rey Mysterio would win the Cruiserweight Title a grand total of eight times in his career. In addition, Mysterio would rack up for reigns as WWE Tag Team Champion with Edge, Rob Van Dam, Eddie Guerrero, & Batista and, in 2006, Rey Mysterio would win the 2006 Royal Rumble Match and would go on to become the smallest World Heavyweight Champion in history at WrestleMania 22, when he defeated then champion Kurt Angle and Randy Orton in a Triple Threat Match.

Three months later, Rey Mysterio would lose the World Heavyweight Title to King Booker at The Great American Bash and it would be four years before Mysterio would win another World Title, winning a Fatal 4-Way Match at WWE Fatal 4-Way in 2010 to win his second World Heavyweight Title, only to lose it a month later to Kane. Rey would also twice win the Intercontinental Championship in 2009, defeating John “Bradshaw” Layfield in record time at WrestleMania 25. Mysterio would lose the title to Chris Jericho a couple of months later, but Jericho would only hold the title for a few weeks before Rey Mysterio regained the gold. On the July 25, 2011 episode of RAW, Rey Mysterio would defeat The Miz in the Finals of a tournament to crown a new WWE Champion, but his first reign as WWE Champion would last mere moments as John Cena would beat Mysterio that same night for the title. Rey Mysterio’s last television appearance for WWE was on RAW the night after WrestleMania 30, where he lost to Bad News Barrett.

What was your favorite Rey Mysterio moment? Post your comments in the box below.