Brock Lesnar has been the most unusual Champion in WWF/E history. Though technically he is in the midst of his fourth reign, his first three title runs came during his first stint with WWE, from 2002-2004. During that short stretch, he regularly wowed audiences with incredible athleticism (especially for a man his size), great wrestling acumen, and the ever elusive “it factor” that separates the almost-greats from the true legends. His feuds with Undertaker, Kurt Angle and Eddie Guerrero made Smackdown a must-watch show in the early days of the brand split. His youth and talent combined to make him the sure face of the company for the foreseeable future.

Only problem was Lesnar hated his job.

Okay, that’s a bit of an exaggeration. To be fair, the man himself has said that he loved performing and he loved the spotlight (he also clearly loved the money, but we’ll get to that later), but being a WWE superstar–especially one that has been picked by Vince McMahon to help carry the company–is a 365 day a year job. The typical performer is going to work most days per week, being on the road constantly, and only seeing home for a night or maybe two per week. The grind of the road took its toll on the young superstar; he became addicted to pain killers and alcohol and burned out only a couple years into a long contract.

Released from his WWE deal in order to pursue an NFL career, Lesnar almost managed to be signed by the Minnesota Vikings. Instead the team wanted him to go to Europe to play with the potential to get picked up by the team at a later date. Traveling abroad was just as detested as the WWE road schedule, so Lesnar decided not to pursue a pro football career. Keep in mind that he told Vince McMahon that being an NFL player was his dream. You can imagine Vince’s consternation when Lesnar signed a deal to wrestle for New Japan Pro Wrestling.

Though the Tokyo-based promotion was hardly a WWE competitor, Vince took legal action to stop Lesnar from wrestling. Lesnar countered with a law suit of his own and ended up winning on the basis that his no-compete clause was not in good legal standing. That makes two times that Lesnar has gone toe to toe with Vince McMahon and gotten his way. Not to mention the amount of money and time that was put into Lesnar while originally employed by WWE. Vince no doubt saw all of that as wasted money, and worse, the performer behind the waste had just beaten him in court.

Remember that this is the man–the genius “billionaire” himself–who brags about how he beat the United States of America in court. He once compared his steely resolve during the mid-90’s steroid trial to America’s determination in the days following 9|11 (he made those comparisons TWO DAYS after September 11, 2001). And then Lesnar went and beat him in court. And then he started calling his F-5 finisher “The Verdict” just to add salt to the wound.

The bridge between the two of them had long since been burned down and paved over by the time Lesnar turned his attention to UFC. Within three fights he was Heavyweight Champion. His natural charisma, hatred of playing the media game, and outsider nature made him a natural villain in the eyes of UFC fans. True to himself, Lesnar did not try to win anyone over. He was a prize fighter, not a politician. He successfully defended his championship twice more before losing it to Cain Valasquez in a fight that seemed to be over before it started. His next match in the octagon would come a little over a year later, in which Lesnar appeared even more unprepared. Obviously his struggles with diverticulitis are well documented but just in terms of form and technique Lesnar seemed done as a fighter. In fact it would be–to date–his last fight. 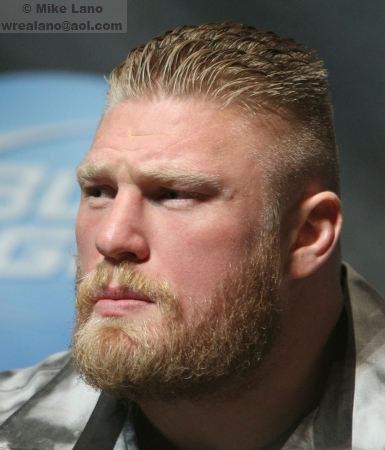 When he left WWE he was pegged as a flash in the pan, a hot shot talent that couldn’t handle the road and left. Were it not for his UFC run, Lesnar would have been all but forgotten by WWE fans. But you can’t discount his UFC run. His time as a mixed martial artist led to some of the highest buyrates in UFC history. As a result, Lesnar became one of the highest paid athletes in the world. When he walked away from WWE, he was just another failed superstar. When he walked away from the octagon, he did so as one of the biggest PPV draws walking the earth. Lacking a new revenue stream to compare to his MMA career, Lesnar began negotiations to return to WWE. The return was beneficial to both sides as Vince was in hungry for big names to help carry his company’s PPV buyrates (we’ll save the failures of WWE to create new stars for another day). Already the Rock had returned, and–seeing the value in Lesnar’s increased brand–Vince paid handsomely to sign the former WWE champion.

He re-debuted to a bigger reaction that he ever had from 2002-2004, and immediately became the top “special attraction” in the company. That was 3 years ago. Since then, the investment Vince put into Lesnar has resulted in some of the biggest WWE moments of the past several years (and in one case, the biggest match finish possibly ever). Rumored at 5 million per year, Lesnar’s WWE contract only calls for the performer to appear a handful of times between each WrestleMania. He fought John Cena in his first match back, spiked a huge buyrate for a late-April show, and put on one of the bloodiest fights WWE has seen in a decade. He then entered a three-match program with Triple H that lacked a lot of the spark the Cena match had, but nonetheless helped pop a big SummerSlam buyrate, and ushered in Lesnar’s return to WrestleMania. A year later he would beat the Undertaker clean in the middle of the ring, in the most shocking finish since at least the Ivan Koloff victory over Bruno Sammartino. Comparing the two reactions shows eerie similarities (both audiences sat in stunned silence, with many others crying). 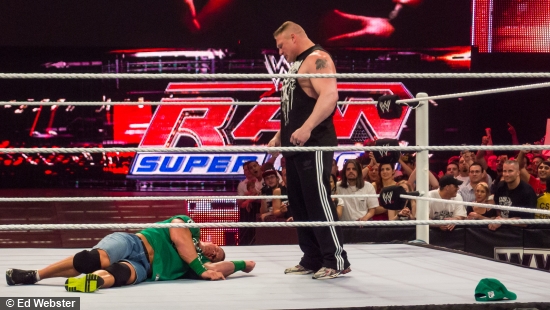 After ending the streak Lesnar went on a tear, demolishing John Cena in the most one-sided WWF/E championship match since Diesel squashed Bob Backlund in 1994. But where Diesel beat Backlund in seconds, Lesnar spent every bit of 16 minutes to humiliate John Cena, pummeling him with suplex after suplex until finally the pin was more an act of mercy than dominance. Since then he has retained his title twice over and now heads to WrestleMania 31 with his longest consecutive title reign and the most momentum he has ever had as a pro wrestler. Even when he was “the next big thing” and winning the King of the Ring, and knocking out everyone from Hulk Hogan to Rock to Undertaker, he never looked as “unbeatable” as he does now.

Probably. No one really knows, and judging by the reports of shouting matches between the two sides, it’s clear that McMahon sees the value in him and doesn’t want to let him go without making the best offer possible. It’s a shame that it took two-thirds of his wrestling comeback before his potential was realized. He should have been dominating guys from the moment he returned. Instead he walked out of WrestleMania 29 a pedestrian 1-2 in his first three matches. Since then he has been undefeated but it’s only been since he conquered the streak in 2014 that he became the force he should have been from the beginning. 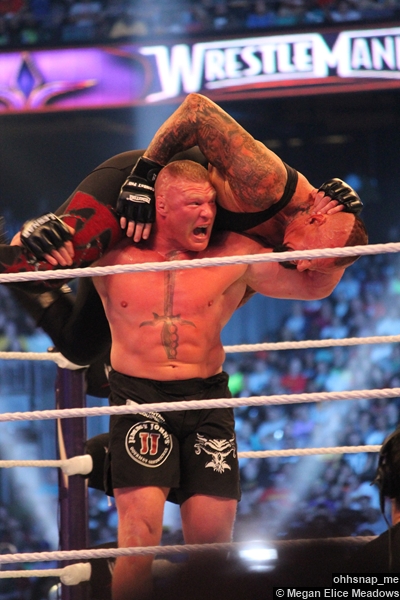 With his limited schedule, prize-fight character, and the added bonus of the greatest promo guy in wrestling history standing in his corner, there is still a lot of mileage left in the Lesnar tank. Fights with Daniel Bryan, Randy Orton, Cesaro, Bray Wyatt, Rusev, a singles match with Seth Rollins, and potentially one last fight with his greatest rival, Kurt Angle: All of those fights have potential to do good money for the company, with or without the WWE title on the line.

When Lesnar left in 2004, the fans booed his WrestleMania 20 match with Goldberg relentlessly (it was, of course, the final match for both superstars, and they put on the least-physically exerting match possible, as a result). They booed because they saw him as a quitter who couldn’t hang in the WWE. When he left the NFL, he was pegged as a quitter who didn’t want to put in the work to make a pro roster. When he left New Japan, he did so in part because of a disagreement with management. Again, he didn’t want to play by someone else’s rules. While he thrived in UFC, the big criticism was that he didn’t like to be punched in the mouth (who does?). After his short run with the title, a lot of motivation seemed to leave him and his final fights featured a performer working as a shell of his former self.

Lesnar has been a journeyman most of his professional life, but the one constant has been his star power, it-factor, the championships (both worked and shoot) that have followed him everywhere and most of all, the fact that no one has been able to pin him down or make him do something he didn’t want to do. No matter what Vince McMahon offers, no matter what Dana White throws at him, the only thing that matters is that Brock Lesnar is going to do what’s best for Brock Lesnar. 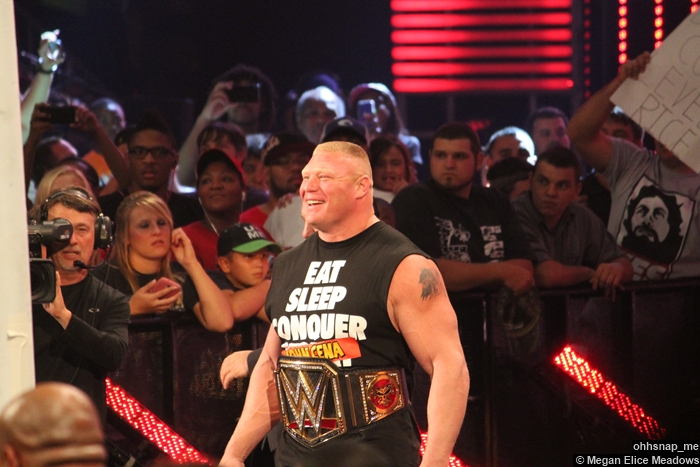 And then when he’s done it enough, he’s going to leave.