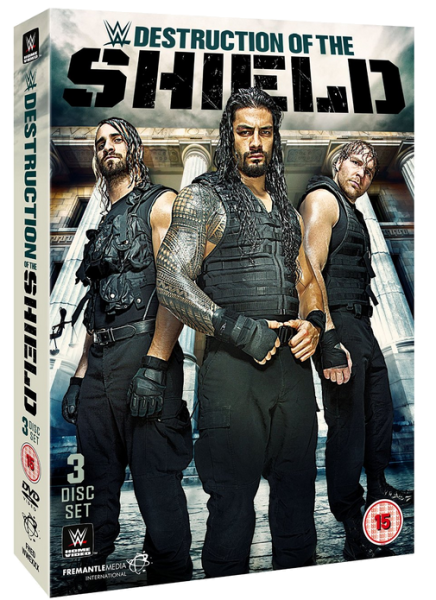 From November 2012 until June 2014, that call sign meant only one thing; somebody was about to get their arse kicked, be it a beat-down or in a sanctioned match… and the fans couldn’t get enough of it.

This set chronicles not only the stellar run they had as a trio, but a brief look at the respective journeys of the members to get to the big stage and the fallout of the chairshot heard around the world that sent the Hounds of Justice on their separate paths.

The main feature is a 68min documentary in the style that WWE does so well; talking heads giving their thoughts between bouts of action or the guys themselves talking about aspects of their career over wrestling footage or scenes of them putting in serious workouts (sure to please some sections of the fanbase on a purely aesthetic level if nothing else).

Gabe Sapolsky is one of those talking heads and he, along with Rollins and Daniel Bryan discuss Ring of Honor, while Dean Ambrose chips in with Gabe when discussing his time in Dragon Gate USA / Evolve and then cuts it solo for a small section on CZW (with footage from a CZW show to boot).

It’s been said many times on the course of these reviews, but WWE’s willingness (at least in the documentary releases) to not only acknowledge, but feature, independent promotions and acknowledge that a lot of the guys on their roster paid their dues before getting to the company is such a refreshing feeling to experience.

Other talking heads include Triple H, Cesaro, William Regal, Terry Taylor, Bill DeMott, Johnny Ace, Joey Mercury and the Usos and none of them seem superfluous to the cause in any way.

The documentary is really great and does a wonderful job of putting over how much of an impact The Shield had in such a short window of time, but also that all three have been earmarked for great things from an early stage in their WWE careers.

Now that the trio are three separate entities, the big question is, can they make it to the very top of the mountain. All three feel that not only that they can do it, they all believe that they will do it. So you can believe that… AND BELIEVE IN (the former members of) THE SHIELD.

The bonuses on disc 1 and all of discs 2 & 3 are devoted to matches and, if you have followed The Shield’s main-roster career, you know that you are in for a treat.

After the doc on the first disc, you get three matches from the FCW vaults; two Iron Man matches between Seth and Dean, plus a Triple Threat that adds Roman to the mix. A wonderful feature of this collection is that every single match has a brief introduction by one of the trio, explaining why the match is taking place and why they believe it deserves recognition.

For newcomers to the group (or just those who only know them from their debut at Survivor Series 2012), this is a great benefit when looking back at their work in FCW and, later, NXT.

There isn’t a single match on here that falls below “really good” on the barometer, but it is a bit of novelty to see all three of them in just trunks, kneepads and boots.

Disc 2 begins with us still in FCW as the absolutely wonderful rivalry between Dean Ambrose and William Regal gets a bit of focused attention. Ambrose introduces one of the matches and I heartily recommend watching this match intently and then seeking out the rest on YouTube.

Rollins and Reigns get one match each from NXT (the former from when he became the first NXT Champion and the latter when he made his NXT debut), before we move on to their first official match on the main roster at the TLC event from December 2012.

In one night, over the course of one match, The Shield set out their stall as THE next big thing in WWE with a stellar performance and a chemistry as a team that seemed almost supernatural at times. Dean winning the US Title and Seth / Roman taking the Tag Team Championships are solid outings, while the Elimination Match at Survivor Series 2013 (the group’s one-year anniversary) was all about sending a statement concerning Roman Reigns. He got booed at Royal Rumble 2015, but on this night, his record-equalling run of four eliminations on the way to a Spear-filled victory saw him as the coolest, most bad-ass, wrecking machine on the roster.

Having him follow that up with a record-breaking effort in the 2014 Royal Rumble Match (which is an exclusive extra on the Blu-Ray edition) let us know WWE saw big things for their latest Samoan superstar.

As the group, who were still heels at the time, were becoming more popular, a face-turn (much in the way Austin and The Rock were turned face by fan reaction) was on the cards. But not before they faced off with another trio of monsters who were making waves of their on in the shape of The Wyatt Family. Which takes us on to Disc 3.

Ever since Bray and his boys began running riot, the prospect of a six-man match between them and The Shield was on everyone’s mind. When it was signed for the Elimination Chamber PPV, most people felt that it should be kept for the following month’s WrestleMania, but were uber-excited about the match anyway. The big question was whether it could live up to the hype.

Before the bell even rang, as The Shield and The Wyatt Family stood on the ring apron, staring at each other from opposite sides of the ring, the chants of “THIS IS AWESOME” rang out. WWE had struck gold and six newcomers were getting to fight it out, make names for themselves and just steal the show… which is exactly what they did. For me, this was the undisputed match of 2014.

The rest of the third disc features the second PPV match against Evolution (the clean sweep in an elimination tag – a huge statement that these are the guys to lead the next charge), which was amazing, as well as the post-break-up Money in the Bank Ladder Match, an amazing Lumberjack Match from SummerSlam between Ambrose and Rollins that redefined what that type of match could be, Reigns v Orton from the same event that solidified his ascent to prospective greatness, Dean v Seth again in a Falls Count Anywhere match before the DVD version comes to a close with Rollins taking on his other former brother on RAW in September 2015.

As I said, not a bad match on the entire collection.

The Shield are easily the biggest recent success story in WWE. Whether through a happy accident that it caught on or through the dynamic of the three guys involved, the group just worked. They set themselves apart early with the backstage “found-footage” style promos, with the entrance from the crowd (which they didn’t originate, but they did it perfectly), the cohesive teamwork, the chemistry, the way they complimented each other… you could go on and on and on.

At just over an hour, the documentary seems way too short, but that’s kind of poetic because the run of the group itself seems to have been way too short. Sure, they did a lot in an 18mth span, but there was so much more they could have done as a unit.

My silver-lining on this is that I only have to wait until they undoubtedly reform at some point in the next year or two.

The doc is a wonderful look at the formation of the trio, their ascent into glory, the destruction of the trio and where their individual paths may lead. The matches are magnificent icing on a delicious cake and for that alone, with the novel “**guy** introduces said bout” approach, I cannot recommend this enough.

Have you seen it? Add your rating in the slider poll below…