Netflix has become a pervasive force in our lives – even if you don’t have a current subscription you’re bombarded with its influence from all sides. It’s quite simply, a great new way to get our entertainment fix. There are tons of movies in just about every genre you can think of, but there are also some great shows on Netflix. One of the best of these is The 100. Nothing captures the human imagination quite like a doomsday scenario, and The 100 falls squarely into that category. 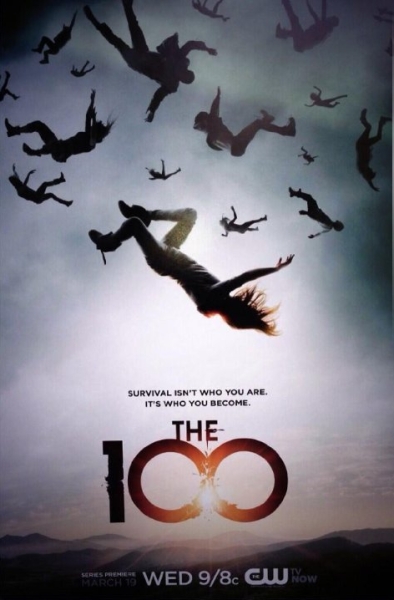 While the show is loosely focused around 100 young convicts sent back to earth from an orbiting space station known as The Ark 97 years after nuclear annihilation has wiped out civilization, the real star of the show is one character from those 100 individuals. Clarke Griffin is the reluctant hero in this one. She’s continuously thrust into situations that force her to assume a leadership position amongst the group, and she slowly warms to the role over the course of the first two seasons.

Life isn’t black and white it’s a fuzzy shade of grey – the most evil individuals have some redeeming qualities and good people do bad things all the time. The writers of The 100 really tap into these conflicting aspects of human nature. In the first season of the show we’re introduced to two groups of enemies. The first is a vicious group of primitives which The 100 soon comes to know as Grounders. They’re kind of a cross between the Mongol Hordes and the bad guys from the Mad Max movies – very intimidating! The second group of enemies are not so obvious. This group is an advanced group of survivors that avoided nuclear annihilation by locking themselves away in an airtight bunker buried deep inside a mountain known as Mt. Weather.

As the shows plot develops at first it’s not hard to dislike the Grounders, they seem so obviously evil. They attack the young group of space station evacuees without any apparent provocation as they attempt to explore their new surroundings. With their faces painted in war paint or covered with warrior style masks they attack with ferocity and you can’t help but view them as the epitome of all evil, but like anything else in life things aren’t always as they seem. The vicious aggression displayed by the Grounders is partially a reflection of the brutal nature of their existence in a harsh apocalyptic world, and partially a product of their battle for survival with the advanced civilization of Mt. Weather.

The Mountain Men of Mt. Weather at first seem like potential saviours for The 100. Almost half the members wake up in Mt. Weather at the beginning of season 2 after a mysterious gas puts them to sleep. It’s not immediately clear if they are prisoners, but eventually they are introduced into the general population – all seems well. There’s a sense that The 100 may have found a new home for their people – a home amongst people with a similar level of technical sophistication and the same love of civilization.

Like so many other things that seem too good to be true, it turns out the people of Mt. Weather aren’t exactly what they seem. They are a dying desperate people, and like most of us, they’re willing to do whatever it takes to survive. If you’re familiar with the tale of Little Red Riding Hood, then the people of Mt. Weather will quickly remind you of the Big Bad Wolf – they might be dressed up like your sweet old grandma, but they most definitely are not.

It turns out the people of Mt. Weather can’t go outside into the real world because of their lack of ability to deal with the increased levels of radiation in their post-apocalyptic world. They are confined to their underground existence and they’re slowly dying out. In their desperation to return to the surface where their people would be able to flourish they’re willing to do just about anything – including inhuman experiments on the Grounders, and the members of The 100 under their control.

As this part of the plot develops we start to question our initial judgements about the Grounders – are they really evil marauding hordes, or are they just doing anything they can to survive in the face of a far superior enemy? It turns out there’s a lot more grey than we were initially led to believe. Clarke begins to realize that all is not right in Mt. Weather and she begins to plot her escape.

Her escape attempt is ultimately successful, and she’s soon reunited with her people that are not being held captive in Mt. Weather. Clarke discovers that the rest of the survivors of The Ark have returned to earth which leads to her being reunited with her estranged mother. Like every other relationship in this show, theirs is a complicated one – there’s a definite love hate relationship going on here. To her mother’s surprise she soon finds out that living on the ground has changed her daughter in a lot of ways. She’s become a leader and she’s not afraid to challenge her mother’s authority.

Clarke’s leadership role soon leads her to develop an alliance with the Grounders who share a common enemy in the people of Mt. Weather. After two seasons of The 100 the only thing that is clear is that each of these three groups of people are capable of great good and great evil. Clarke ends up making decisions that lead to the deaths of a lot of her own people as well as those of her Grounder allies. The 100 are just as human as the other groups in this show. They’re not all good or all bad, just somewhere in between – willing to do whatever it takes to survive.

What makes The 100 such a great show is this constant reminder of the true human condition – warts and all. Humans make mistakes, we do things we’re not proud of, but hopefully we learn something from it all. That’s the essence of this show. The characters grow on you – even the worst of them are not all bad. They have certain redeeming qualities just like all of us. This shows ability to remind of us of our human frailties is what elevates it from a good show to a great one.