Fear and Loathing in WrestleMania: On Reigns, Lesnar and one heck of a poor feud

Where the wind is blowing: WrestleMania 31 looks set to disappoint

Compared to John Cena’s rise from upper card guy to “the man,” Reigns push looks dead in the water before it even officially kicks off. One big reason is found in the list of potential challengers to Reigns’ Championship. The list of guys Cena ran through while being established as the new top dog, was a veritable who’s-who of the Attitude Era. Though it resulted in a backlash against him by older fans, it still accomplished getting him over and turning him into a true blue draw. Remember how Batista became a made man in June of 2005, after his three-match series with Triple H? He eventually settled in to being—at best–the number 2 guy on the roster because he wasn’t given the kind of sustained rub Cena got. Batista went to Smackdown where the only main event feuds available were with JBL, King Booker and Undertaker. Obviously Undertaker was a main-event caliber feud, but Batista lost that feud, so..

The point is Cena was given a list of opponents that–by beating them–solidified himself as the next big thing. Look at the list, stretching from his Raw debut in June 2005 to his WrestleMania 22 main event win in 2006:

That’s a heck of a gauntlet of superstars whose names are synonymous with the peak of Pro Wrestling. And he went 5-0 over those guys.

Who are the guys Reigns is going to burn through? He can have great matches against Seth Rollins and Bray Wyatt and others of this generation, but that’s the problem: Those are stars of THIS generation. By nature they are going to be at least on Reigns’ level, and since Reigns will be champ for at least part of these feuds, they will be automatically seen as a notch below his level. Austin fought Rock in 1999, yes, but during his ascension he fought Bret Hart, HBK, and Undertaker; guys who were made men already, and by beating them he got the rub.

Reigns’ potential competition, other than a few (Cena, Lesnar again [if he re-signs], maybe Orton again), looks to be a gauntlet of guys who NEED a rub (Rollins, Wyatt, Cesaro, Rusev, even Sheamus), and won’t be able to GIVE one.

The best comparison to this–and it’s not a happy one–is 1996, when HBK won the title and Bret Hart left to film Lonesome Dove, leaving Michaels to work with a bunch of guys who weren’t made men. They were talented and popular, but other than one match with Diesel before he left for WCW, none of Michaels’ PPV opponents between Mania 12 and his Survivor Series title loss were prior champions (Vader is sort of an exception, as he was a former NWA champ, but that wasn’t a fact that the WWF promoted, obviously).

Reigns’ best chances of fighting former champs are Lesnar at Mania (obviously) and John Cena, which is big enough match is surely has to wait until a future WrestleMania. He can fight a heel-turned Randy Orton again, but that’s big enough to be a SummerSlam match (and would require Orton to turn back to a heel so soon after turning face). Who are going to be Reigns’ opponents during the in-between months?

Reigns is likely to flop because of a lack of preparedness to handle the fans rejection and a lack of enough top top stars to feed to him and get him over as a credible champion who can draw at the top of the card.

It almost seems like the creative minds set out to do the opposite of everything that worked last year. Not just in the main-event, but across the board:

Last year Cena was in a compelling feud with Bray Wyatt. This year? He’s got a feud that looks like a better fit for WrestleMania 7, than WrestleMania 31.

Last year Lesnar and Undertaker traded the upperhand during many back-and-forth segments in the weeks preceding WrestleMania 30. This year, both Lesnar and Undertaker (in separate feuds) are missing in action. The Undertaker doesn’t look to appear until the event itself, and Lesnar–when he does appear, merely stands and smirks while Paul Heyman carries the feud on his back. 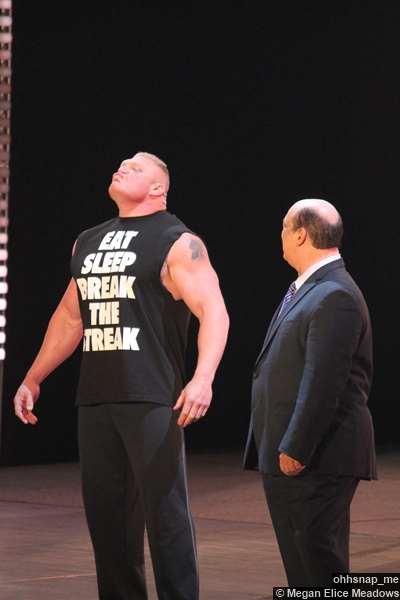 Last year Triple H took part in the most compelling “authority angles” since the original Austin vs McMahon in 1998. This year he’s a heel talking about buring the hated-WCW by beating the only WCW guy left the fans actually want to cheer for (a guy who has so few appearances in his contract that the feud is mostly being carrier out via TitanTron text messaging).

Last year the Andre the Giant Battle Royal was set to be a fun attraction. It ended up providing one of the highlight moments of the night. This year it looks like a side show, stuffed with wrestlers, feuds and stories that didn’t have a place on the main card (Miz vs Mizdow, #AxelMania, Sheamus, Goldust)

Last year Daniel Bryan was chasing the dream of becoming the man and winning the WWE World Heavyweight Championship. This year he’s an afterthought in an 8-man ladder match for what is currently the number 3 belt in the company.

Last year the Shield was the hottest trio in the company, on their way to squashing the New Age Outlaws like a bug. This year: Ambrose is lost in the aforementioned ladder match, Rollins is set to get further pancaked by Orton, and Reigns’ struggles have already been touched upon.

Last year had energy and excitement. This year has a sense of malaise. Major shakeups need to happen across the board with the way WWE tells its stories, but shakeups that big can’t happen in the days leading up to the biggest show of the year. They have to happen starting on the night after WrestleMania, though, or these weak road to WrestleMania ratings are only going to get worse in April and May.