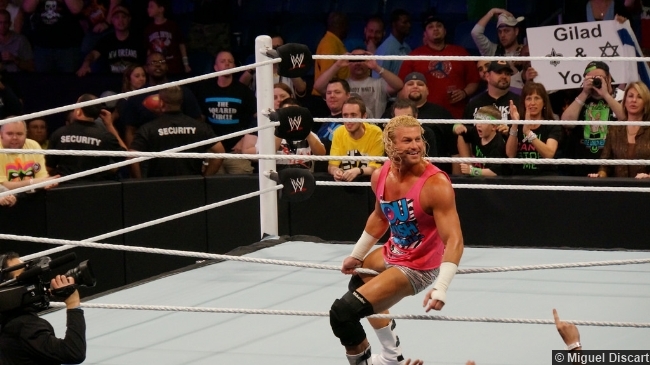 Before he is forced to put his spot in the Royal Rumble Match on the line against Kane in a No DQ Match later in the evening, SmackDown kicks off with Daniel Bryan. Bryan says that he could come out there and discuss the importance of keeping his spot in the Royal Rumble Match and he could come out there and talk about Sting’s RAW debut or he could talk about The Authority. Bryan then says that he’s not going to talk about any of those things because John Cena did something very important on RAW, saying that he wants to bring out a few guys who might have some things to get off of their chest. With that, Daniel Bryan brings out the three men who got their jobs back, thanks to John Cena, this past Monday night on RAW as “The Big Guy” Ryback, Erick Rowan, and “The Show-Off” Dolph Ziggler all join Daniel Bryan in the ring!

Daniel Bryan says that he is sure they are all excited to compete again, asking Ryback for his thoughts. Ryback says that Daniel Bryan knows what it’s like to have to sit at home while the world passes them by, saying that WWE has been his “passion” since the age of twelve and “nobody” takes that away from him. Ryback then says that, thanks to John Cena, Sting, and all the fans, everyone realizes how much The Authority “sucks”. Removing his sheep mask, Erick Rowan says that being gone was sort of a “blessing” because he had some time to sit back and “think”. Rowan explains that he used to be “naïve” and he used to be a “puppet”, but he has seen himself in a “new light” and now he knows who he really is. Dolph Ziggler says that he belongs in WWE with each and every one of them, saying that he earned the right to go toe-to-toe with the best in the business. Dolph then says that The Authority got rid of them because they called The Authority out and stood up for what they believe in. Ziggler then says that he would endure all the punishment The Authority can dish out than sit at home because this is what he does and he is just getting started!

The festivities are then brought to a halt with the arrival of Seth Rollins, Kane, Big Show, and J&J Security as Rollins calls Daniel Bryan a “garden gnome”. Ready for a fight, Dolph Ziggler calls “Mr. Money-in-the-Bank” out, but Rollins refuses, saying that he’s got “more important things” to do than deal with Ziggler. Rollins then says that, this Sunday, he is going to beat both John Cena and Brock Lesnar and become the new WWE World Heavyweight Champion. Dolph then comments that he has never seen someone run as fast as Rollins did on RAW when he was running away from Brock Lesnar. Kane then speaks up, telling Dolph that he is pretty “disrespectful” for a guy who just got rehired less than three days ago. Kane then tells Daniel Bryan that Bryan still has to go through him to make it to the Royal Rumble Match this Sunday. Bryan responds by not only bringing up Kane’s problems with Brock Lesnar this past Monday night on RAW, but showing them as well. Bryan then shows Brock Lesnar delivering the F-5 to Kane, as well as the F-5 to Big Show from RAW. Big Show then says that there is nothing that he would like better than to toss everyone every one of them over the top rope in the Royal Rumble Match. Kane then says that he knows that Dolph Ziggler is probably itching to be a part of the Royal Rumble Match, but since he is technically a “new employee”, he is going to have to start at the bottom. Kane then says that Dolph Ziggler will face the man who beat him for the Intercontinental Title before Dolph was fired a few weeks ago, Bad News Barrett, and that match will happen right now.

In his first match since being rehired, thanks to Sting and John Cena on RAW, Dolph Ziggler would return to action on SmackDown as “The Show-Off” would face Intercontinental Champion Bad News Barrett in a Royal Rumble Qualifying Match where, if Dolph wins, he will gain entry into the 30-Man Royal Rumble Match this Sunday! At the end of a hard-fought match, it was Dolph Ziggler avoiding the Bull Hammer Elbow before hitting the Zig Zag on Bad News Barrett, pinning the Intercontinental Champion to pick up the win and earn a spot in the Royal Rumble Match!

After being rehired by virtue of John Cena’s triumph over The Authority on RAW, “The Big Guy” was back on SmackDown as Ryback would go one-on-one with United States Champion Rusev, with Lana in his corner, in a Royal Rumble Qualifying Match. During a hard-hitting match between the two powerhouses, Ryback was moments away from being the first man to defeat Rusev by pinfall, but just as “The Big Guy” was ready to put Rusev away with the Meat Hook Clothesline, Rusev rolls out of the ring. However, Ryback follows the United States Champion, tossing Rusev into the ringside barricade and blasting Rusev with several right hands. Then, just as the referee reaches a count of ten, Ryback slides back into the ring as Rusev is counted out, giving Ryback the victory and earning “The Big Guy” a spot in the Royal Rumble Match. Embarrassed by the count-out loss, Rusev would attack Ryback, but Ryback would fight back, nearly dropping Rusev with Shell Shocked. However, the United States Champion would escape Ryback’s grasp, retreating from the ring as Ryback stands tall.

With Paige & Natalya guests on commentary, Brie Bella, with Divas Champion Nikki Bella in her corner, would face Naomi on SmackDown. In the end, it was Brie Bella hitting the Bella Buster on Naomi, pinning Naomi for the win.

In a Royal Rumble Qualifying Match, Erick Rowan would face his former tag team partner, Luke Harper, on SmackDown. In the end, it was Luke Harper hitting the Discus Clothesline on Erick Rowan, pinning Rowan to ensure that Erick Rowan will not be a part of the 30-Man Royal Rumble Match this Sunday night.

Then it was time for the main event as Daniel Bryan would be forced to put his spot in the 30-Man Royal Rumble Match on the line against The Authority’s demon, Kane, with Seth Rollins lending J&J Security to be in Kane’s corner, in a match with no disqualifications. Early on in the match, J&J Security would get involved, allowing Kane to take advantage in the match. Kane would then get a kendo stick from under the ring, using the legal weapon to punish Daniel Bryan, but Bryan would get his hands on the weapon, using the stick to wear Kane down to his knees. Bryan then mixes kicks with kendo stick shots to take Kane down before attempting to come off of the top rope with the kendo stick, but Kane catches Bryan in mid-air with a big uppercut. Kane would then get his hands on a steel chair, wearing Daniel Bryan down with the chair before wedging it in the corner.

After a brief flurry by Daniel Bryan, Kane would regain the advantage, sending Bryan into the steel stairs. J&J Security would then expose the announce table and Kane would climb on top of the table with the intent of delivering the Tombstone Piledriver to Bryan. Luckily for Daniel Bryan, Bryan is able to escape Kane and fights out of a chokeslam attempt before sending Kane into the steel ring post. Bryan then climbs into the ring before diving out onto Kane, following it up with a big running dropkick to Kane. J&J Security would then attack Bryan and, while Bryan would fight J&J Security off, the distraction would let Kane gain the advantage. Refusing to give up, Daniel Bryan would lock Kane in the Yes Lock, but J&J Security would break it up and Bryan would take J&J Security out. Kane then catches Daniel Bryan with the chokeslam, but Bryan manages to kick out! A frustrated Kane then grabs a steel chair, but Bryan delivers a dropkick to the knee of Kane, sending Kane face-first into the steel chair in the corner. Bryan then follows this up with the running knee, pinning Kane to overcome the odds and cement his spot in the Royal Rumble Match! However, Daniel Bryan’s celebration would be short-lived once Bryan got to the stage as Big Show ambushes Bryan with a right hand to the kidney of Bryan. Big Show then carries Daniel Bryan back to the ring, where Kane, Big Show, and J&J Security commence the four-on-one beatdown of Daniel Bryan.

However, the newly rehired Dolph Ziggler, Ryback, & Erick Rowan rush out to even the odds before Luke Harper, Bad News Barrett, Cesaro, Tyson Kidd, & Titus O’Neil come out. This is when an all-out brawl takes place as the locker room empties out with countless Superstars rushing to the ring in a preview of what the Royal Rumble Match will be like! Dean Ambrose then rushes out to join the fight, followed shortly by Roman Reigns. As Superstars are tossed out of the ring left and right, Roman Reigns targets Big Show, beating the giant down before blasting both members of J&J Security with the Superman Punch, following it up with a Spear to Titus O’Neil. Realizing that the Royal Rumble Match will be every man for himself this Sunday night, Roman Reigns, Dean Ambrose, Ryback, Dolph Ziggler, & Daniel Bryan all stand across the ring from each other, cautiously waiting for someone to make the first move before Kane & Big Show get on the ring apron, as well as all seven Superstars cautiously stare at each other.