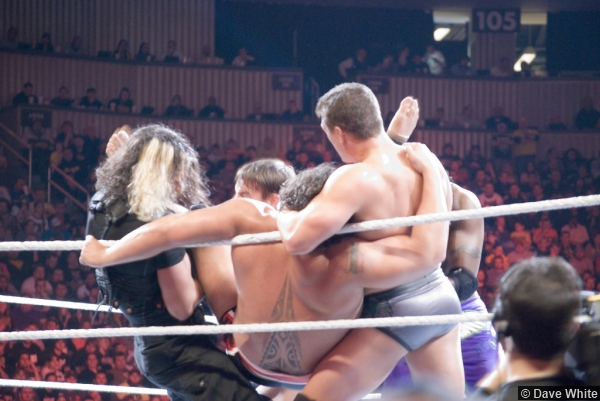 The 28th annual WWE Royal Rumble will come to you, live on the WWE Network and select pay-per-view providers, tomorrow night, January 25, at 8/7c from the Wells Fargo Center in Philadelphia, PA. In addition to the 30-Man Royal Rumble Match, the Royal Rumble will also feature a Triple Threat Match for the WWE World Heavyweight Championship, a WWE Tag Team Title match, and a special appearance by The New Age Outlaws. Here is the final card for the event:

The 30-Man Royal Rumble Match will start with two randomly selected Superstars in the ring and, at a predetermined interval, another Superstar will join the match until all 30 competitors have entered. Elimination occurs when a Superstar is thrown over the top rope with both feet landing on the floor and the last man standing will win the Royal Rumble Match and earn a guaranteed shot at the WWE World Heavyweight Championship in the main event of WrestleMania 31.