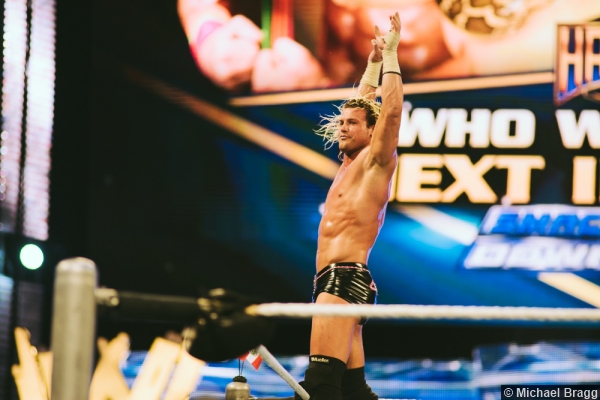 With their respective WWE TLC matches just nine nights away, the remnants of The Authority would appear on SmackDown as “Mr. Money-in-the-Bank” Seth Rollins, along with J&J Security, leads former Director of Operations Kane and “The World’s Largest Athlete” Big Show to the ring. Seth Rollins says that it is that time of the year again, saying that it is almost time for WWE’s annual “demolition derby” known as WWE TLC. Rollins then reminds the crowd that, at WWE TLC, he will be facing John Cena in a Tables Match and, if Cena loses, he will no longer be the #1 Contender for the WWE World Heavyweight Championship. Rollins continues, saying that it “excites” him to know that he can take away everything that John Cena has worked so hard for and he doesn’t even have to pin Cena or make him tap out, all he has to do is put Cena through a table like he did on RAW. Rollins then says that, not only is a table going to be broken, but John Cena’s “spirit” will be broken as well because Cena is going to realize that Rollins is the “future” and everything that Cena has worked for is “gone”.

Big Show then says that he has been in “thousands” of matches, but he will be in his first Steel Stairs Match at WWE TLC against Erick Rowan. Big Show then offers a demonstration of what he plans to do to Rowan come WWE TLC, tossing the steel stairs around at ringside. Back in the ring, Big Show says that nothing can prepare Rowan for what he is going to do to Erick Rowan at WWE TLC, saying that Rowan is going to “eat” the steel a week from Sunday. Former Director of Operations Kane then says that, when he faces Ryback in a Chairs Match at WWE TLC, all Ryback is going to be “fed” is “chair after chair after chair”. Santino Marella then comes out to the stage with another big announcement, announcing that the main event will see the team of Seth Rollins and Big Show face Ryback and Erick Rowan!

The New Day was in action on SmackDown as, with Big E in their corner, Xavier Woods & Kofi Kingston would face the team of Cesaro & Tyson Kidd, with Natalya in their corner. In the end, it was Kofi Kingston hitting a backbreaker on Tyson Kidd, holding Kidd in place while Xavier Woods comes off of the top rope with a double stomp to the face, pinning Kidd to pick up the win for The New Day! After the match, The New Day’s attention turns to the big screen where Gold & Stardust appear as Stardust says that the definition of “insanity” is doing the “same thing over and over again” and expecting a “different result”. Stardust then asks where this “bright side” is that The New Day speaks of because they have been searching, but all they can find is a “black hole”. Goldust then proclaims that they have been “awakened” and The New Day’s positive message means “nothing” to them, saying that “darkness falls on The New Day”. Back in the ring, Xavier Woods responds, saying that, what Gold & Stardust do not understand, is that when they are united, there is no “force in the cosmos” that can hold them back. Kofi Kingston then says that is exactly what The New Day is all about and, if they have a problem with that, they will send Gold & Stardust back to whatever planet they came from. Big E then proclaims that they are going to “feel the power” of The New Day.

Backstage, Naomi is beaming over a bouquet of flowers she assumes is from her husband, Jimmy Uso, but when confronted by her husband, Jimmy discovers that the flowers are an attempt at an “apology” from The Miz. Uso responds to this by smashing the vase full of flowers on the floor before storming off.

With his TLC Match against Bray Wyatt just nine nights away, “The Lunatic Fringe” Dean Ambrose would appear on SmackDown. Ambrose says that he took “sick pleasure” in destroying Bray Wyatt’s rocking chair on RAW, saying that the chair was a “symbol” to Bray Wyatt and, now, it is a symbol to him. Ambrose says that the broken chair symbolizes what he is going to do to Bray at WWE TLC, saying that he is going to pick Wyatt apart with the help of tables, ladders, and chairs, proclaiming that the “mind games are over”.

Dean Ambrose was then set for action against Rusev, but after the United States Champion, with Lana in tow, make their way to the stage, Lana says that Rusev is not going to compete tonight. Lana then explains that the fans can thank Jack Swagger for that, showing footage from RAW where Jack Swagger would attack Rusev in response to Rusev assaulting Zeb Colter in the backstage area moments earlier. Lana then says that they will no longer be subject to America’s “intimidation”, saying that Americans are “cowards” and “opportunists”. Lana continues, saying that America’s existence is a “disgrace” to the world before Rusev says that he is going to snap every bone in Jack Swagger’s body just like he did to Zeb Colter. Rusev then says that the United States Championship belongs to him, belongs to Russia, and it belongs to Vladimir Putin. Ambrose then says that he tuned Rusev & Lana out after Lana said that Rusev would not be competing, saying that he is looking for a fight and he doesn’t care what kind of condition Rusev is in.

However, as soon as Dean Ambrose exits the ring, he is ambushed by Bray Wyatt, tossing Ambrose into the barricade. Wyatt then grabs a steel chair from under the ring and, after sending Ambrose into the ring apron, Bray would use the steel chair on the back of “The Lunatic Fringe”. Bray would then pin Ambrose up against the ringside barricade, telling Ambrose that the chair that Ambrose broke on RAW was “her chair”. Wyatt then puts the chair against the throat of Dean Ambrose, compacting Ambrose’s throat by slamming the chair into the steel steps! As Bray Wyatt sits on the floor, holding the steel chair and laughing, the ringside physician calls for the EMT’s as Ambrose gasps for air. Referees are then dispatched to keep Bray Wyatt back so that the medical team can tend to Dean Ambrose, who is carefully strapped onto a backboard and given oxygen before the EMT’s load Ambrose onto a stretcher, wheeling Ambrose out of the arena.

As The Miz continues to anger Jimmy Uso by getting involved with Jimmy’s wife Naomi, WWE Tag Team Champions The Miz & Damien Mizdow were on SmackDown as The Miz, with Damien Mizdow in his corner, would go one-on-one with Jey Uso, with Jimmy Uso in his corner. The match would begin, but when Jimmy Uso could not contain his rage, the referee would have no choice but to eject Jimmy from ringside. During the match, Damien Mizdow would do his stunt double duty by launching himself over the top rope just like Jey Uso forcefully did to The Miz. This would distract Jey Uso long enough for The Miz to take advantage as Miz hits the Skull Crushing Finale, pinning Jey for the win.

With AJ Lee a guest on commentary, Brie Bella, with her sister and Divas Champion Nikki Bella in her corner, would go one-on-one with Naomi on SmackDown. During the match, Nikki Bella would get on the ring apron with the intent of interfering in the match, but AJ Lee would pull Nikki Bella off of the ring apron. This would serve as a distraction for Brie Bella and Naomi would take advantage, rolling Brie up for the win.

Then it was time for the main event as, nine nights before their respective battles at WWE TLC, “The Big Guy” Ryback would team with Erick Rowan to face “Mr. Money-in-the-Bank” Seth Rollins and “The World’s Largest Athlete” Big Show, with Kane and J&J Security in their corner. During the match, Ryback would be moments away from putting Seth Rollins away, but J&J Security would get on the ring apron and, while Ryback would knock J&J Security off of the apron, it would still give Rollins the advantage. A few minutes later, Ryback was again close to getting the win when Kane gets on the ring apron. Ryback knocks Kane off of the apron, but Kane would climb right back up and, this time, the referee had seen enough as the referee ejects Kane from ringside! Kane would refuse to leave and several other referees would have to come out to get Kane off of the ring apron and escort him to the back. However, with the referee’s back turned, Seth Rollins would make the tag to Big Show and, with the referee not seeing the tag, the referee would not allow Big Show into the ring! Erick Rowan would then blast Big Show with a big boot, taking Big Show to the outside while Seth Rollins argues with the referee in the ring. Ryback would take advantage of the situation, blasting Seth Rollins with the Meat Hook Clothesline, following it up with Shell Shocked, pinning Rollins for the win. After the match, J&J Security would tend to Seth Rollins and Big Show as Ryback and Erick Rowan stand tall in the ring.