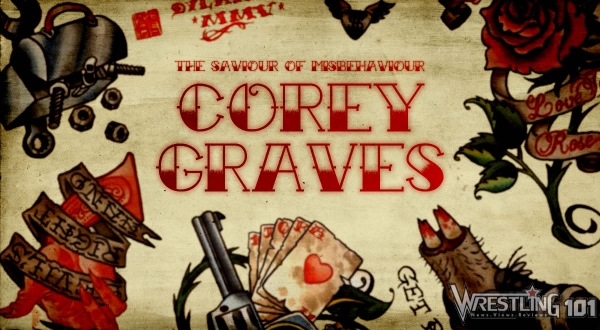 The announcement was made during the WWE NXT TakeOver: R Evolution pre-show last night that NXT star Corey Graves has been forced to retire from in-ring competition due to several concussions throughout his wrestling career. After a rough eight-months in WWE, Corey Graves will now take his promo skills to the announce table as Graves will now be a part of the NXT announce team. In an interview with WWE.com, Graves commented on his retirement and future with WWE, “I’m really excited to start a new chapter of my career and life. These last eight months have been up and down, emotionally, but I’m really looking forward to being part of the show again.”

Before being informed by WWE physician Dr. Joseph Maroon (who conferred with several specialists that Corey Graves went to see) that he would no longer be able to compete in the ring, Corey said that he had a frank conversation with Triple H, “I saw Triple H in the [WWE Performance Center’s] gym, I asked if he had any updates for me. His demeanor changed. He said something like, ‘I’m going to be honest with you. If I were you, I’d prepare for the worst.’ You could have told me a million things were going to happen to me that day, that wouldn’t be one of them. I remember just walking out of the gym in disbelief and going to the locker room, which was empty, and I fell apart. I was this close and I had my fingers on the prize. It was like, ‘Oh my God, I wasted my life. What am I going to do?’ I have a family, my wife was eight months pregnant at the time. My world fell apart in that moment.” Graves then discusses how he decided to take on the job of becoming part of the commentary team, “I got in the booth here with Rich Brennan every day, we really developed chemistry. Knowing the business and growing up watching it like I did, I feel like I took to it pretty quickly. It’s taken some time to get there, but I’m very excited to try something new.” Graves then praises WWE for keeping him under contract despite not being able to compete, “WWE could have very easily discarded me and said, ‘You’re not able to do what we hired you for any more, so good luck to you. I like to think that they saw value in me, not only in the ring, but in what I’ve been able to prove I can do in the months since then.”

Are you a fan of Corey Graves? Post your comments in the box below.