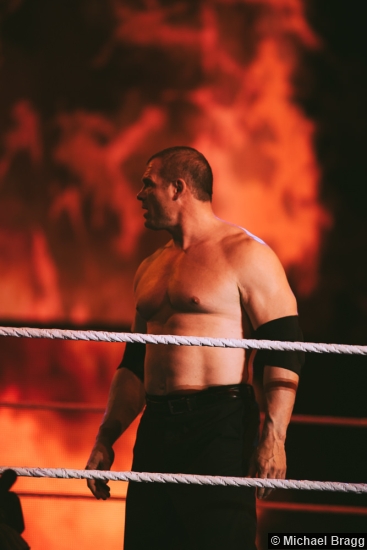 SmackDown kicks off with the new WWE Tag Team Champions, The Miz & Damien Mizdow, as the self-proclaimed “A-Lister” and his stunt double would host Miz TV. After crowing about ‘his’ tag team title win at Survivor Series, The Miz introduces the man who betrayed Team Cena by knocking out John Cena at Survivor Series, “The World’s Largest Athlete” Big Show, who joins the tag champions in the ring. The Miz says that John Cena called Big Show a “traitor” and the only mistake that Big Show made was joining Team Cena. Big Show says that the fans want to “judge” him and Erick Rowan wants to “judge” him as well, saying that none of them understand the difficult position he was in. The man in charge for the night, Daniel Bryan, then makes his way to the ring to address Big Show. Bryan asks the fans if they are ready for “Daniel Bryan’s SmackDown” before announcing that, tonight, Ryback will go one-on-one with Seth Rollins in addition to the Intercontinental Title being defended! The Miz then interrupts, telling Daniel Bryan not to steal his “spotlight”, but Bryan says that he could not possibly steals The Miz’s spotlight because The Miz’s stunt double is already doing that. Bryan then says that he has another announcement to make, but Big Show interrupts Bryan, saying that they don’t need to hear what Bryan has planned and, right now, it’s about him. Bryan says that, on RAW, he told Rusev that, if he did not recite the Pledge of Allegiance, he would have to defend his United States Title and, since Rusev refused, Rusev will have to defend his United States Title in a 20-Man Battle Royal and that match will start right now and will feature Big Show, The Miz, Damien Mizdow, and the man who got the better of Big Show on RAW, Erick Rowan!

Per the orders of Daniel Bryan, the opening match was a 20-Man Battle Royal for the United States Championship as Rusev, with Lana in his corner, would defend the gold against Big Show, Erick Rowan, WWE Tag Team Champions The Miz & Damien Mizdow, The Usos, Gold & Stardust, Los Matadores, Slater Gator, Cesaro, Sin Cara, Tyson Kidd, Curtis Axel, Adam Rose, Justin Gabriel, & Jack Swagger, with Zeb Colter in his corner! The first elimination of the match would see Big Show tossing Justin Gabriel out of the match, followed by Sin Cara. Erick Rowan then tosses Heath Slater out before Cesaro gets rid of Curtis Axel and Los Matadores eliminate Adam Rose. The biggest man in the match, Big Show, would then use his size and strength to eliminate both Los Matadores. However, Erick Rowan would prove more than capable of contending with “The World’s Largest Athlete as the unusual big man clotheslines Big Show over the top rope and out of the match! Shortly after this, Rusev would catch Erick Rowan from behind, eliminating Rowan. Next to go was The Miz, who goes over the top courtesy of Gold & Stardust and, doing his job as a stunt double no matter what, Damien Mizdow mimics The Miz and tosses himself over the top rope! However, with Gold & Stardust’s attention on the WWE Tag Team Champions, Jack Swagger would take advantage, eliminating both bizarre brothers!

With seven competitors left in the battle royal, Titus O’Neil eliminates Jimmy Uso from the match before Jey Uso avenges his brother by eliminating Titus O’Neil. Tyson Kidd then eliminates Jey Uso, leaving only Cesaro, Tyson Kidd, Jack Swagger, and the defending champion Rusev in the match. Jack Swagger then hoists Tyson Kidd over the top rope shortly before Swagger eliminates Cesaro. However, Rusev would take advantage of Swagger’s position on the ring apron, blasting Swagger with a kick to the face, knocking Swagger to the floor to successfully retain the United States Title against unfavorable odds.

After finding himself buried under a pile of steel chairs at Survivor Series at the hands of Dean Ambrose and after repaying Ambrose on RAW, “The Eater of Worlds” Bray Wyatt would make an appearance on SmackDown to discuss his WWE TLC opponent. Bray Wyatt says that they don’t have room for people like he and Dean Ambrose “up there”, saying that the pain he felt at Survivor Series made him feel “euphoric”. Bray continues, saying that he “failed” himself and Ambrose’s “demons” mold Ambrose, but Bray molds the demons. Wyatt then says that this is a “celebration” because they have finally reached the “point of no return”, saying that, at WWE TLC, he will finally be able to smile because he has finally put Ambrose back in the “dirt” with the rest of the “insects”, falling to his knees and proclaiming “follow the buzzards”.

With her sister, Brie, in her corner, the new Divas Champion was in action on SmackDown as Nikki Bella faced Emma in a non-title match. It was an impressive win for the Divas Champion as Nikki Bella hits the Rack Attack on Emma, pinning Emma for the win. After the match, Nikki Bella addresses AJ Lee, saying that she has worked “harder” than AJ Lee and she is what a “real Divas Champion” looks like and, to her, she will always be that “manipulative little girl from New Jersey”. This brings out AJ Lee who had no interest in talking as the former champion makes a beeline for the ring and, as Nikki Bella exits the ring, AJ Lee pounces on Brie Bella, pummeling Brie until Brie is able to slip out of the ring, leaving a seething AJ in the ring.

In a match made earlier in the night by Daniel Bryan, SmackDown would see “The Big Guy” Ryback square off with “Mr. Money-in-the-Bank” Seth Rollins, with J&J Security in his corner. After having to deal with J&J Security’s interference throughout the match, Ryback would finally take Noble & Mercury out, but with Ryback ready to hit Shell Shocked on Seth Rollins, Kane slides into the ring with a steel chair, causing the disqualification. However, Ryback would catch Kane with a spinebuster and, with some help from Seth Rollins, the chair is taken away from Ryback as Kane blasts Ryback with a big boot. Rollins then hands the chair over to Kane, who repeatedly strikes Ryback with the steel chair before picking “The Big Guy” up and planting with a chokeslam on the steel chair!

Backstage, an interview with Daniel Bryan yields a big announcement as, in his final act before his week in charge is over, Daniel Bryan announces that, at WWE TLC, Ryback will go one-on-one with Kane in a Chairs Match!

Then it was time for the main event as, per the orders of Daniel Bryan, Dolph Ziggler would get the opportunity to regain the title he unceremoniously lost on last week’s RAW as “The Show-Off” would challenge Luke Harper for the Intercontinental Championship. After failing to put Dolph Ziggler away, Luke Harper would take Dolph to ringside, tossing Ziggler over the announce table, but Dolph would fight back, blasting Harper with a super kick. Dolph then gets back into the ring just before the referee reaches the count of ten as Ziggler wins the match by count-out, meaning that Luke Harper is still the Intercontinental Champion. After the match, Luke Harper would try to blast Ziggler with the title belt, but “The Show-Off” would move out of the way, scoring with the Zig Zag on the Intercontinental Champion and surviving against the odds yet again!