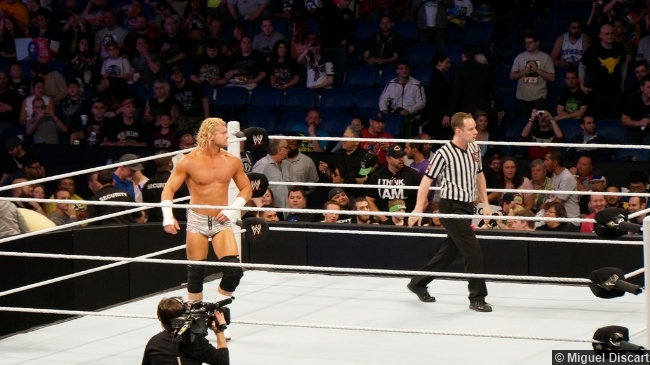 SmackDown kicks off in a major way as, for the first time since Night of Champions in September, six-time former World Champion Chris Jericho would appear in a WWE ring as “Y2J” would present The Highlight Reel with his special guests, Triple H & Stephanie McMahon. After making a couple of jokes regarding The Exotic Express’ resident bunny, Chris Jericho would introduce two of his biggest detractors throughout his WWE career as WWE COO Triple H & WWE Principal Owner Stephanie McMahon make their way to the ring, joining Chris Jericho on The Highlight Reel. Jericho asks why The Authority wanted on The Highlight Reel, but Stephanie answers a question with a question, asking when the last time that Jericho was in Liverpool. Stephanie says that WWE would be nothing without the fans and that is why they make the Superstars “fight” for what they believe in. Stephanie continues, asking where WWE would be without a McMahon in charge, saying that only The Authority is capable of running WWE. Jericho says that the WWE fans can run WWE, asking the fans if they would like to see Triple H lick his shoes and clean the bathrooms and if they would like to see Stephanie covered in muck. Jericho then shows a clip of Stephanie getting thrown into a pool of filth by Vickie Guerrero back in June.

Triple H then changes the tone of The Highlight Reel as the COO says that The Authority does not need anyone’s “approval” to do what they do, saying that the “wolf” does not ask to be embraced by “sheep”. Triple H then says that Team Authority is going to “tear through” Team Cena at Survivor Series, asking who is going to be laughing after Survivor Series and saying that The Authority will be the ones laughing. Triple H then gets in Jericho’s face, saying that the next time that Jericho asks to come back and get his “fix” of WWE from the fans, then maybe The Authority will not be so accepting and, maybe, they will have “erased” Chris Jericho from the history books! The Authority then exits the ring as Chris Jericho leads the crowd in singing “Na, na, na, na, hey, hey, hey, goodbye” to The Authority.

With a match against Dean Ambrose coming up a week from Sunday at Survivor Series, “The Eater of Worlds” was in action on SmackDown as Bray Wyatt went one-on-one with Sin Cara. In the end, it was a dominant victory for Bray Wyatt as Bray hits Sister Abigail on Sin Cara, pinning Sin Cara for the win. After the match, Bray Wyatt addresses Dean Ambrose, saying that Ambrose has left “unloved” throughout his life and that, as a kid, Ambrose would head downstairs with the hope of seeing his father, but all he would find is “darkness”. Bray continues, saying that “darkness” has become a way of life for Ambrose, but he is the “light” that Ambrose has been searching for his entire life, asking Ambrose to let him “fix” Ambrose. This brings Dean Ambrose out and “The Lunatic Fringe” makes his way to the ring with his sights set on Bray Wyatt, but Bray slides out of the ring, telling the riled-up Ambrose that all he has to do is “pull the strings” and Ambrose comes out. Bray then tells Ambrose to “punish” him before entering the ring and getting blasted with a right hand from “The Lunatic Fringe”. Not missing a beat, Bray Wyatt would continue his speech as he walks to the back, saying that Ambrose wears the “mask of a lunatic” and telling Ambrose that he is the “key to the light” and, if Ambrose follows him, then Ambrose will never be in the “dark” again.

Moments after her husband came within an eyelash of winning the Intercontinental Title, Natalya was in action on SmackDown against England’s own Layla, with Summer Rae in her corner. After knocking Summer Rae down on the outside, Natalya would lock in the Sharpshooter on Layla in the ring, making Layla tap out to pick up the win.

In a backstage interview with Dean Ambrose, Ambrose would say that he is “sick of games” and, if Bray Wyatt wants to get inside his head, Bray is going to “regret it”. This is when Bray Wyatt would strike as “The Eater of Worlds” would drive an anvil case into the mid-section of Ambrose, slamming his head off of the case before delivering Sister Abigail to Ambrose into a concrete wall! Bray then sits and cradles the head of Ambrose, saying that the world was not meant for people like them and people try to put them in “boxes”, but that leads to them being put into a box in the ground.

Then it was time for the main event as, after leaving a ton of doubt as to which team he will join at Survivor Series, or if he will even join a team at all, “The Big Guy” Ryback would go one-on-one with the man he delivered a Shell Shocked to on RAW, The Authority’s Director of Operations Kane, with Triple H & Stephanie McMahon seated at ringside. After narrowly avoiding Shell Shocked, Kane’s true intentions would be revealed as the Director of Operations would grab a steel chair at ringside, jabbing it into the mid-section of Ryback, causing the disqualification. With the match now over, Kane would deliver a second chair shot to Ryback before bringing him back into the ring. After some instructions from Triple H on the ring apron, Kane would turn his focus back to Ryback, but Kane would walk right into a spinebuster by Ryback! With Triple H watching from the ring apron, Ryback would grab the steel chair, delivering countless shots to Kane, knocking the Director of Operations out of the ring. Things would then get very interesting once Ryback steps forward and locks eyes with Triple H as “The Big Guy” gets in the COO’s face with neither man backing down.