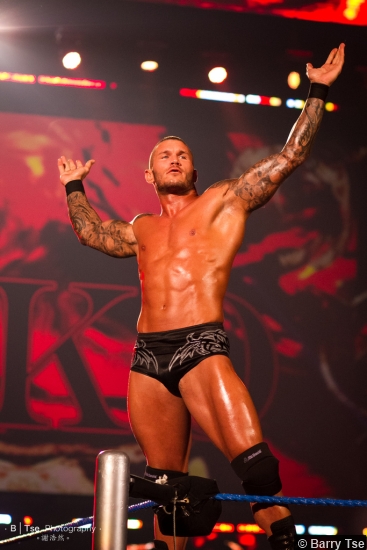 Last night’s RAW saw Randy Orton rebel against The Authority, even attacking WWE COO Triple H, leading to a beat-down by Authority members Seth Rollins, Kane, Jamie Noble, & Joey Mercury that ended with Seth Rollins delivering a Curb Stomp to Orton on the announce table and a second Curb Stomp on the steel steps. As a result, WWE.com is reporting that “The Viper” suffered a concussion due to the attack and will be out of action for an undetermined amount of time, effectively writing the twelve-time World Champion off of television.

The real reason behind Randy Orton being written off of television is that Orton will be filming his role in the upcoming film from Lionsgate and WWE Studios, The Condemned 2: Desert Prey. The Condemned 2 is a sequel to the 2007 original starring WWE Hall of Famer Stone Cold Steve Austin and Vinnie Jones. The plot of the movie sees ten convicted criminals being “purchased” by a television producer and the ten criminals are transported to a desolate location with bombs attached to their ankles to keep them from leaving. The ten criminals must then fight to the death while a worldwide audience watches with the last criminal left alive being granted his freedom from prison and also earning a cash prize. It is likely that the sequel will follow the same formula and, as the title implies, it will most likely take place in a desert setting. Orton is expected to be off of television for at least a month filming the role. The movie is scheduled to be released in 2015.

Will you watch The Condemned 2? Post your comments in the box below.