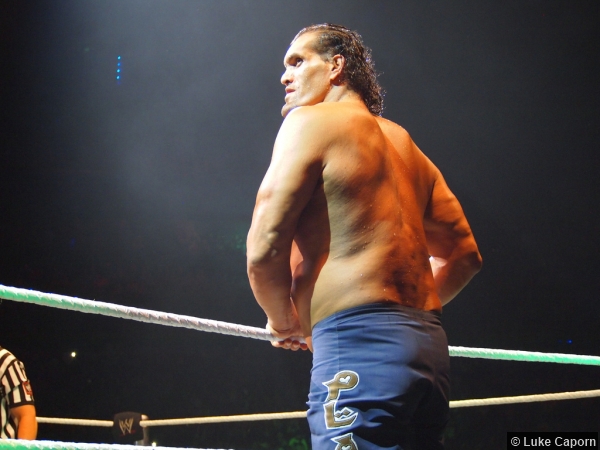 After eight years with the company, the Wrestling-Online Newsletter broke the news today that former World Heavyweight Champion The Great Khali (Dalip Rana) is no longer a part of WWE as Khali’s contract expired on Thursday and WWE opted not to renew it. The 42-year old India native made his WWE debut on the April 7, 2006 episode of SmackDown, attacking The Undertaker. In his feud with “The Deadman”, the seven-foot, one-inch Khali would actually defeat the legendary Superstar at Judgment Day in 2006 and was set to face The Undertaker in the first ever Punjabi Prison Match at that year’s Great American Bash, but an unknown medical issue would result in Khali being pulled from the match and replaced by Big Show. Just before SummerSlam in 20o6, Khali would face Undertaker in a Last Man Standing Match on SmackDown, which was won by The Undertaker, giving “The Punjabi Giant” his first loss in WWE.

The Great Khali was then drafted to the ECW brand before being moved to RAW and being moved again to SmackDown where Khali began a brief feud with Kane that culminated in a match between Khali and Kane at WrestleMania 23, where Khali would win in his WrestleMania debut. Again being moved to the RAW brand, Khali would become the #1 Contender for the WWE Championship, sparking a feud with then champion John Cena. In his first title match, Khali would unsuccessfully challenge John Cena for the WWE Title at Judgment Day 2007, where he lost via submission, even though Khali’s foot was under the bottom rope. This would lead to a rematch at One Night Stand where Cena would deliver the F-U to Khali off of a crane in a Falls Count Anywhere Match, pinning Khali to retain the WWE Title.

The Great Khali would then be transformed into a fun-loving, dancing giant, but mounting problems with his knees would require Khali to take a lot of time off from WWE for knee surgery, as well as personal time with his family. Khali would continue to make sporadic appearances over the next several years, none of which were sustained feuds and “The Punjabi Giant” became more of a spot-filler in various battle royals. Khali’s final appearance for WWE was on the October 31 episode of SmackDown, where he lost to Rusev.

Do you have a favorite Great Khali moment? Post your comments in the box below.