WWE: Bo Dallas out of action with foot injury 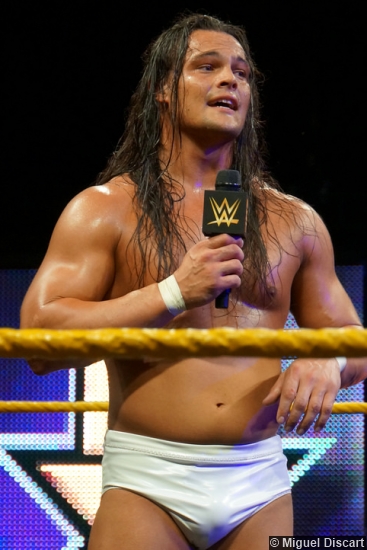 WWE.com is reporting that up-and-coming Superstar Bo Dallas will be out of action for six to eight weeks after suffering an injury to his left foot over the weekend. This will effectively keep Bo Dallas off of WWE’s next two pay-per-views, Survivor Series and WWE TLC, and the former NXT Champion may not even return by the end of the year as the time frame for Dallas’ return puts Bo returning to the ring at the end of December, at the latest. Since arriving in WWE in 2008, the 24-year old Dallas was not only the third NXT Champion in history, but he was the longest reigning NXT Champion to date, having held the belt for 280 days before losing it to Adrian Neville at the first NXT Arrival back in February. In addition, Bo Dallas is a three-time FCW World Heavyweight Champion and a two-time FCW Florida Tag Team Champion (with his real life brother, who now wrestles as Bray Wyatt).

Bo Dallas made his pay-per-view debut at the Royal Rumble in 2013, competing in the 30-Man Royal Rumble Match and becoming the first NXT star to do so. Not only that, but the third-generation wrestler also eliminated then Intercontinental Champion Wade Barrett, setting up a very brief feud before returning to NXT. Bo Dallas would then make his proper main roster debut on the May 23 episode of SmackDown, where he defeated Sin Cara. Dallas would remain undefeated for over two months before he was defeated by R-Truth on the July 28 episode of RAW. Bo’s most recent appearance was on WWE Main Event last Tuesday where he lost a match to Sheamus.

Are you a Bo-liever? Post your comments in the box below.