We woke to a gloriously sunny day in New Orleans, and began the hunt for breakfast. Unfortunately the one place I found wasn’t open just yet… 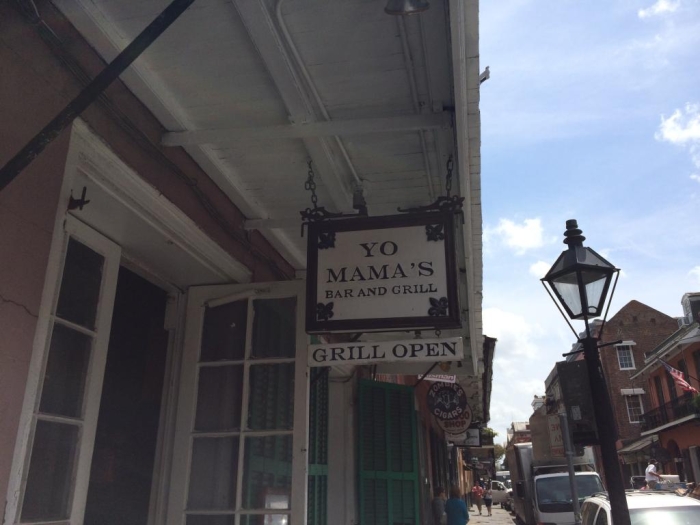 Yo Mama must be lazy. Or had a rough one the night before. Feel free to make your own jokes about why Yo Mama wasn’t up in time. But not to be deterred we decided to head to Café Du Monde to see what these beignets were all about. Turns out Café Du Monde was completely rammed too… 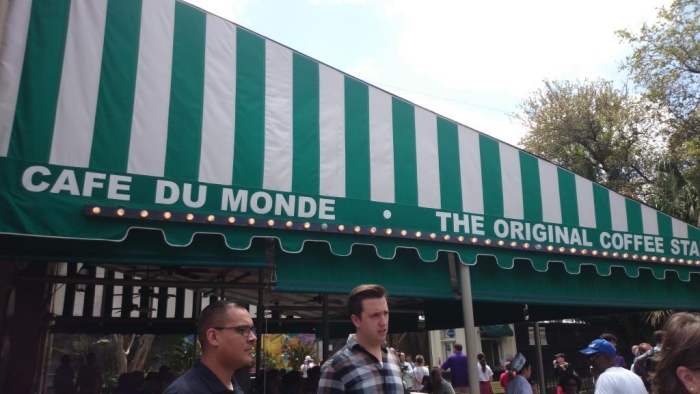 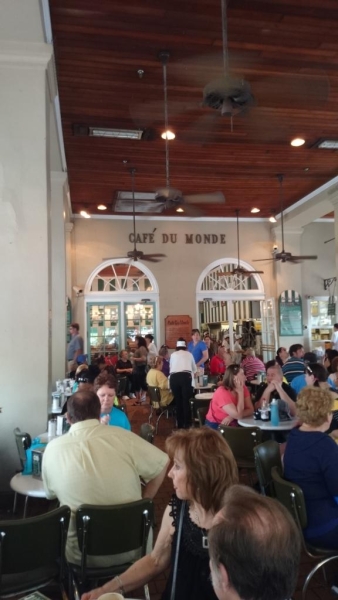 I realise being in town means you should try to sample some of the local delicacies, but there is no way I’m waiting over an hour for some croissant/doughnut hybrid mashup. We grabbed a coffee and some muffins and tried to make up our minds on what to do with ourselves. Neither of us particularly felt the need to buy tickets for Axxess as queuing up for autographs isn’t really either of our thing. What I did want was a Bray Wyatt hat, and after a quick Google we found that WWE had set up a store in the Ernest Morial Convention Centre. Since this was supposedly right next to where we would be heading on Saturday for WrestleCon, we figured we’d go for a walk and take a look. 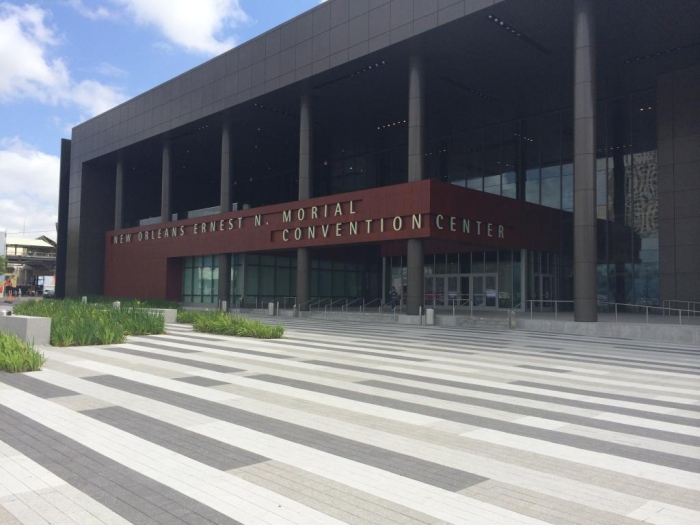 After heading down to the banks of the Mississippi to look for a tram, we found two things out. Firstly, New Orleans really is a gorgeous town. If you’ve ever thought about checking NOLA out, you should definitely go do it. The place is a glorious mixture of old interesting buildings and free-flowing booze. Two of my absolute favourite things. 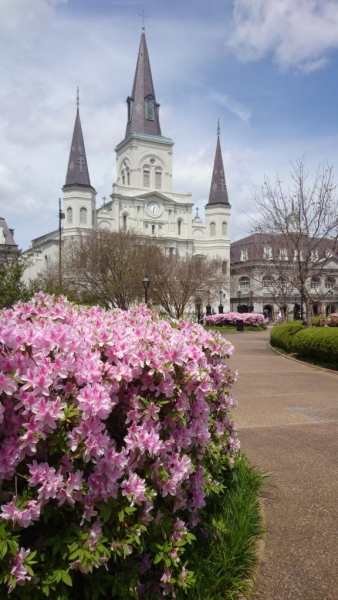 Secondly, we found that the trams run about once every 30 minutes. And we’d just missed one. Undeterred, a quick look at Google Maps revealed that the walk to the Convention Center was only 15 minutes anyways, so we took a stroll along the Mississippi with the sounds of an old steam boat’s pipe organ carrying us along our way.

So it turns out that WrestleMania Axxess was being held at the Ernest Morial Convention Center. Even after trying to avoid it like the plague, I’d still somehow managed to stumble into Axxess. Damn. 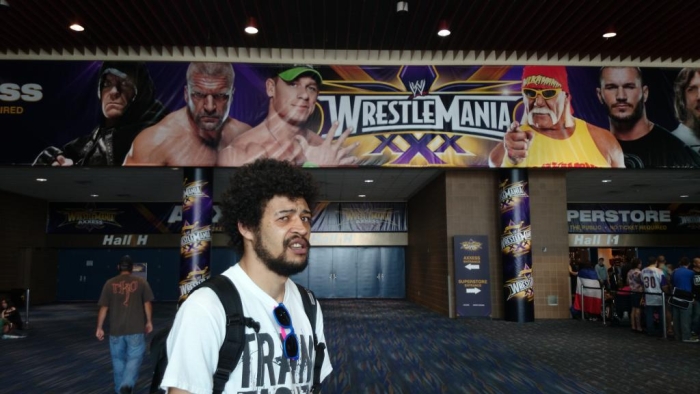 Never one to waste an opportunity we hit the superstore first, where I finally acquired the items I’d refused to pay the extortionate shipping on from WWEshop.com: 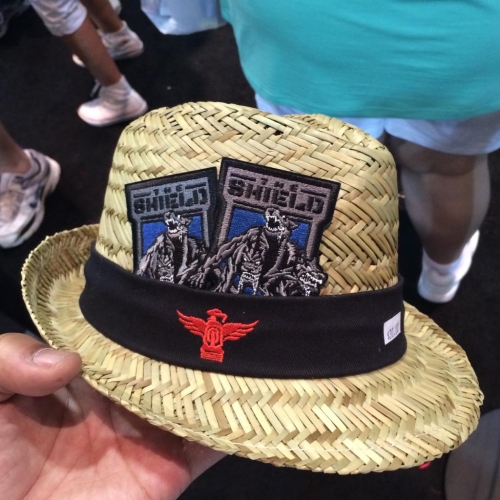 Then we attempted to interview a few of the folks who’d made the journey out to Mania. That didn’t turn out so well. You’d be surprised at the amount of wrestling fans who really are grumpy bitches. Especially considering it’s supposed to be the wrestling equivalent of Christmas. Turns out the guys in Shield shirts were the worst. They took themselves entirely too seriously, and seemed to be in immediate need of some kind of fun transplant, or a rodectomy to remove the stick they had jammed firmly in their asses.

It wasn’t all bad though, I did manage to find a couple of guys to interview. And even a random hot dog seller decided to get in on the action:

After being knocked back SEVERAL times (for shame wrestling fans), it was decided that the only thing that could brighten up this day was booze. And lots of it. We hit up Arby’s to put a lining on our stomachs (which has the most eclectic fast food menu I’ve ever seen) before hitting the first cool bar we came across. Turns out that bar was Spirits of Bourbon, which I’m told is famed for being saved on those of Bar Rescue programs (imagine Ramsay’s Kitchen Nightmares, but for bars). 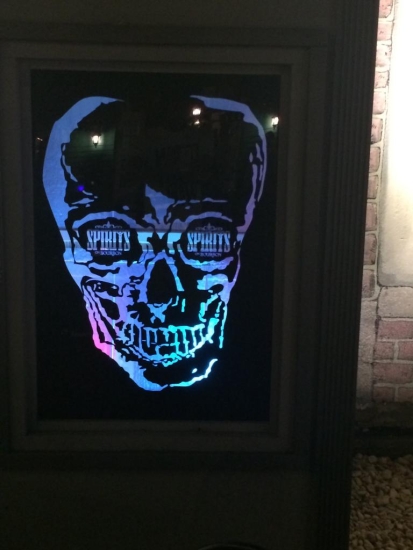 A couple of drinks (and one badly sung rendition of “Country Rose”) later, we decided to keep on trucking to the Cat’s Meow, which is an awesome Karaoke bar right on Bourbon St, where we were greeted by Triple H’s “King of Kings” entrance theme. This immediately blew my tiny inebriated mind, and just went to prove how into the swing of things New Orleans was getting for WrestleMania. NOLA is a party town, so it stands to rights that nobody will do a wrestling party as well as them. Or it could’ve just been the booze making everything seem awesome? 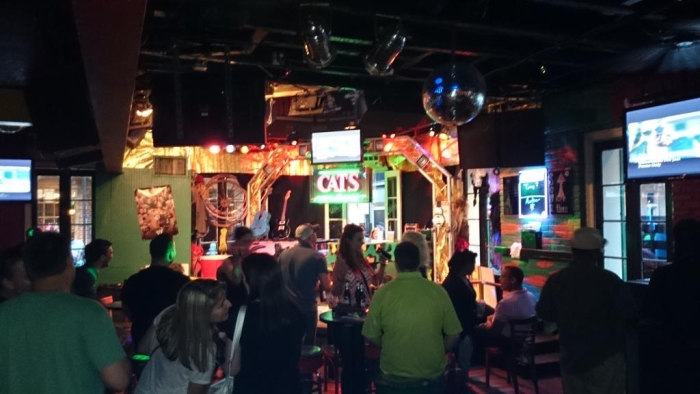 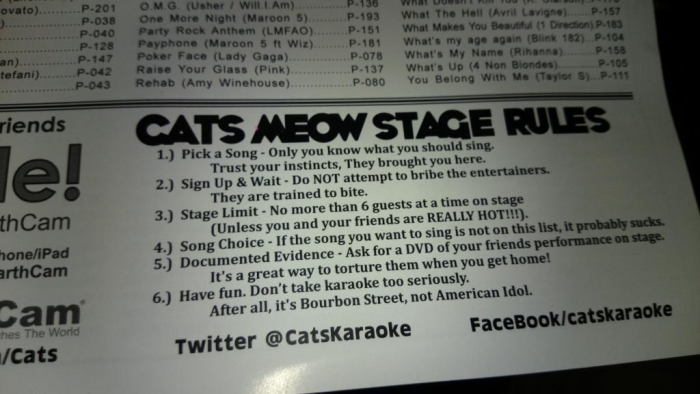 We walked (well, drunkedly ambled) further down Bourbon St, where I had now decided it was about damn time I tracked down the elusive Dean Glass. Turns out that just shouting “DEAN!” randomly in the middle of the street didn’t make him appear. Damnit Dean. On a good note, the walk did give us opportunity for Emily to spot Louis Armstrong Park down a side street. It has a huge light up archway that says “ARMSTRONG”, so you can’t really miss it. 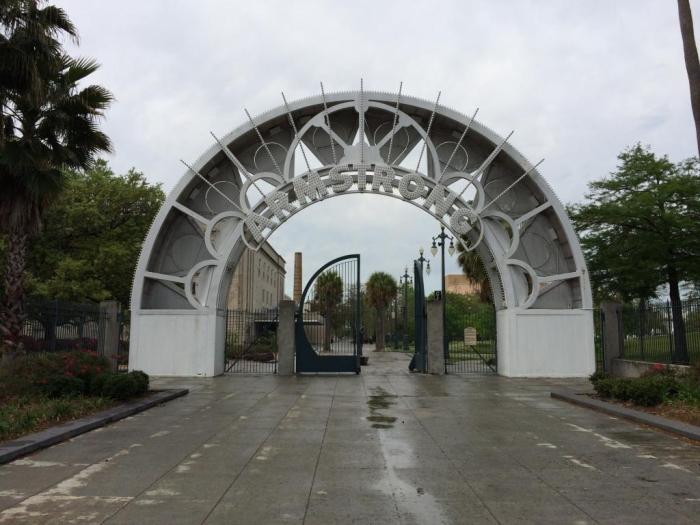 We decided to go investigate during daylight, because you don’t want to be walking round a dark park in a strange city. More drinks followed, Emily found a cat to give some fuss to in the back of Spirits (which she ALWAYS does, it’s becoming a problem)… 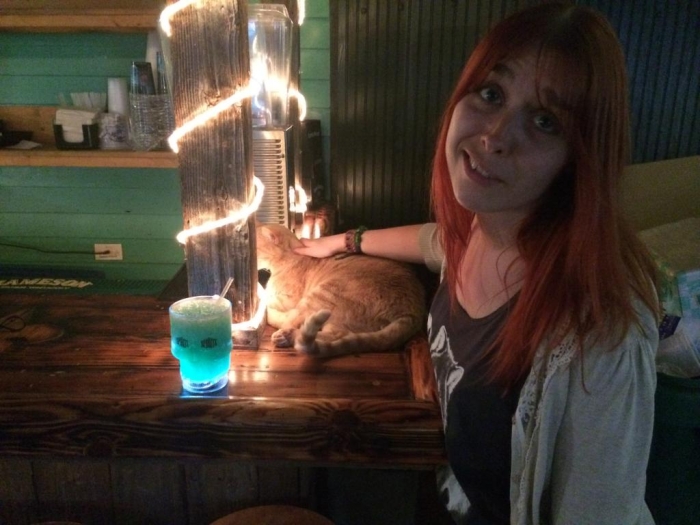 …and we found an awesome band playing at Chris Owens bar (they’re the folks at the end of the video). 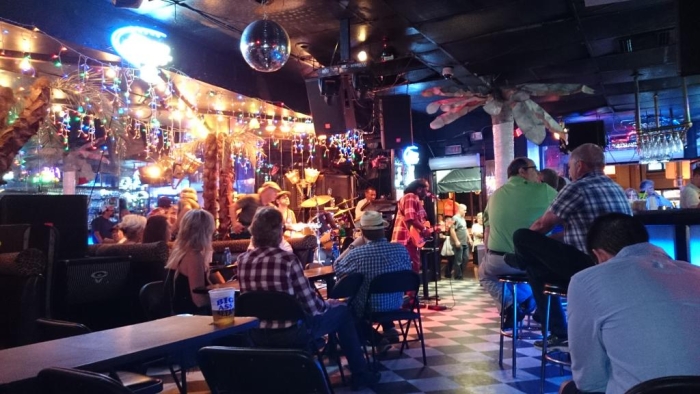 We renewed the search (kinda half-heartedly on my part), but with no Dean in sight, it was decided that we should head to Spirits for one more drink. I had a Blue Moon, while Emily had…well, see for yourself: 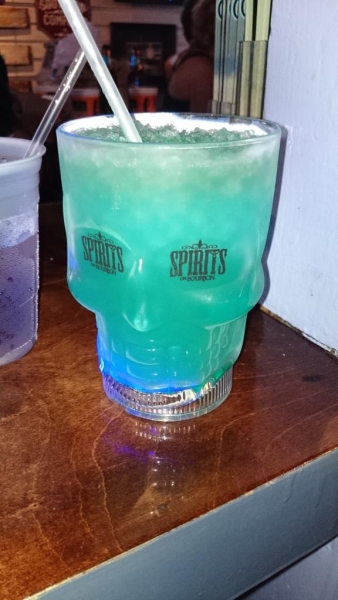 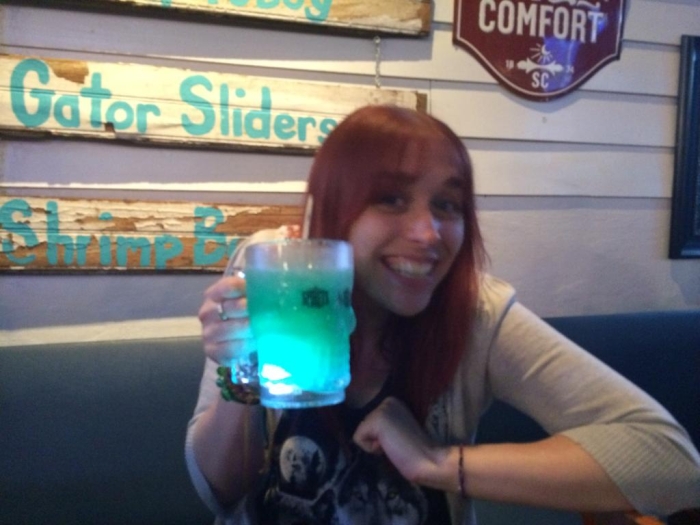 And the best thing? We couldn’t figure out how to turn the glass off. We had to lock it in the hotel bathroom so it didn’t keep us awake all night. (We later found out that all we had to do is press a little button on the bottom of the glass. And by “later” I mean 3 days later)

Disheartened by wrestling fans, inebriated by beer, serenaded by lots of Jazz and surprise Motorhead, and full once more of Crystal’s teeny tiny burgers, we decided to bring day two of our WrestleMania adventure to a close…