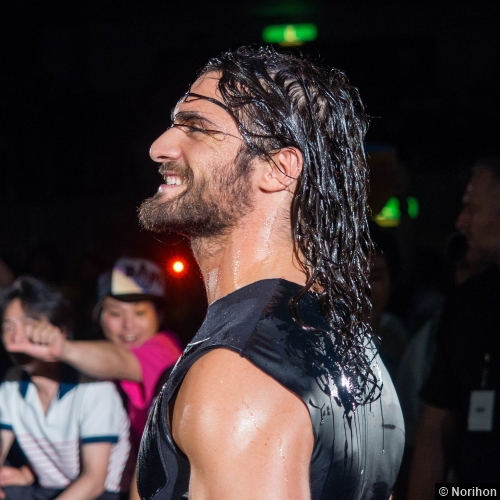 For the first time since both his and Dean Ambrose’s skulls were smashed into the Money-in-the-Bank briefcase courtesy of Seth Rollins, Kane, & Randy Orton on RAW, fifteen-time former World Champion John Cena kicks off SmackDown. Cena says that he and Dean Ambrose were so focused on getting their hands on Seth Rollins that they forgot that The Authority is a “family”, saying that, while Ambrose is fueled by Seth Rollins’ Curb Stomp through a stack of cinder blocks, he is fueled by Seth Rollins costing him the WWE World Heavyweight Title at Night of Champions. Cena continues that the doubts of so many people fueled him for his match against Brock Lesnar and he “needed” that victory, but it was ruined by Seth Rollins. Cena then says that Seth Rollins calls himself the “future of the WWE”, but anyone who claims to be the future will have to go through him to prove it. However, Cena would not get Seth Rollins, but he would get Dean Ambrose, who makes his way to the ring. Ambrose says that he has a lot of “issues”, especially when it comes to Seth Rollins, saying that he intends to make Seth Rollins “pay”.

Cena says that he does not want to do this with Ambrose and Ambrose says that, on RAW, Cena got in his way. Cena says that Dean Ambrose has no idea what it’s like to be in the same ring as Brock Lesnar, but he does and he had “The Beast” beat until Seth Rollins got involved. Ambrose then says that Seth Rollins tried to end his career and he will be damned if he lets anyone else wipe the smile off of Seth Rollins’ face. Cena says that, unless they get on the same page, they are never going to get their hands on Seth Rollins. Cena then offers a truce, proposing that, whoever gets to Rollins first, gets to him first, but before the two could shake hands and cement the deal, Randy Orton, Kane, & Seth Rollins appear on the big screen. Orton says that he can speak on behalf of The Authority that Ambrose and Cena “deserve each other”. Kane then says that Seth Rollins told him that Dean Ambrose once told him that John Cena was “nothing more than an overhyped action who couldn’t wrestle his way out of a box of cereal”. Orton continues to try and turn Cena and Ambrose against each other, claiming that Cena has said that Ambrose was a “nutjob who was going to self-destruct just like every other wannabe who thought he was going to get over by pretending to be crazy”. Kane comments that, if Cena and Ambrose have really learned their lesson from RAW, then they should put it to the test as Cena and Ambrose will face himself and Randy Orton later tonight. The Director of Operations then asks Seth Rollins if he has anything to say, but “Mr. Money-in-the-Bank” stays silent with a look of intense rage on his face.

With her supposed “new best friend”, Alicia Fox, in her corner, Paige was in action on SmackDown as the former Divas Champion would go one-on-one with Naomi. During the match, Alicia Fox would try to rescue her best friend by pulling her out of the ring, but Naomi would take Alicia out with a dive to the outside. However, this would allow Paige to take advantage, locking Naomi in the PTO, making Naomi tap out to pick up the win. After the match, an enraged AJ Lee would waste no time in looking for revenge as the Divas Champion makes a beeline for the ring. While Paige quickly escapes the ring and hides behind the commentators, Alicia Fox was not as fortunate as the Divas Champion tackles Alicia Fox, pummeling Alicia before tossing her out of the ring. As AJ Lee laughs maniacally in the ring, Paige consoles her new best friend on the outside.

After his controversial actions on RAW that saw him tear the Russian flag down from above the ring, resulting in the flag lying on the ground in front of an enraged Rusev, “The World’s Largest Athlete” Big Show would appear on SmackDown to address the controversial incident. Big Show says that, as human beings, they should be held accountable for their actions. Big Show then says that maybe his sense of “nationalistic pride” got the better of him and he might have been a bit “overzealous” in ripping down the Russian flag. Big Show says that there are a lot of Russians that he likes, saying that America is a “melting pot”, but he thought about it and said that, if someone did to Old Glory what he did to the Russian flag, they would be “damn mad”. Big Show continues, saying that he cannot take back what he did on RAW, but he can stand in front of them as an American and sincerely apologize to the Russian people that he may have offended.

However, Big Show’s apology is interrupted by the arrival of “The Hero of the Russian Federation” Rusev, with Lana in tow, as Rusev & Lana make their way to the ring. Lana says that WWE has issued a public apology, but Big Show’s apology does not appease them, demanding a “personal apology”. Big Show says that he apologized to any of the Russian people that he may have “inadvertently disrespected”, but when it comes to Rusev & Lana, he “disrespected” both of them “on purpose”! Rusev then takes the microphone, saying that Big Show and his fellow Americans “suck” before delivering a cheap shot to the mid-section of Big Show with the Russian flag. Rusev repeatedly jabs “The World’s Largest Athlete” with the flag before blasting Big Show with a big side kick. Rusev then celebrates by waving the Russian flag, but quickly exits the ring once he sees an angry giant rise to his feet, taking off his suit and tie and daring Rusev to get back into the ring. However, Rusev aggressively waves the Russian flag before he and Lana back away from the ring.

With their miniature alligator mascot in their corner, Slater & Gator would face former tag team champions The Usos on SmackDown. During the match, The Exotic Express bunny would hop down to ringside, leap-frogging the mini-gator as the mascot collides with the steel ring post. Meanwhile, in the ring, The Usos blast Slater & Gator with dueling super kicks before The Bunny rolls the mini-gator into the ring and, together with The Usos, The Bunny would land a splash off of the top rope on Slater & Gator and their mascot before The Usos pin Slater & Gator for the win. After the match, Adam Rose & The Exotic Express dance their way to the ring as Adam Rose joins The Usos & The Bunny in the post-match celebration.

Still reeling from the controversial finish to his Intercontinental Title match against Dolph Ziggler on last week’s SmackDown, “The King of Swing” Cesaro would go one-on-one with R-Truth on SmackDown. In the end, it was Cesaro planting R-Truth with the Neutralizer, pinning Truth for the win.

Then it was time for the main event as, in a rematch from RAW, John Cena would join forces with “The Lunatic Fringe” Dean Ambrose to face the team of “The Viper” Randy Orton and The Authority’s Director of Operations Kane. After taking a beating for most of the match, Dean Ambrose would come so close to making the tag to John Cena, but Cena would spot Seth Rollins coming down the ramp and Cena’s obsession would cost his partner as Cena would abandon Ambrose in order to chase down “Mr. Money-in-the-Bank”, who quickly runs to the back, followed by Cena. While Dean Ambrose would come within seconds of picking up the win, a big boot from Kane would end the match as Kane & Randy Orton commence the beat-down of Dean Ambrose as Kane plants “The Lunatic Fringe” with a chokeslam before Randy Orton picks Ambrose up and delivers the RKO. John Cena then rushes back to the ring, but the damage was already done and Orton & Kane quickly exit the ring, re-grouping with Seth Rollins on the stage as The Authority ends the night with smiles on their faces.