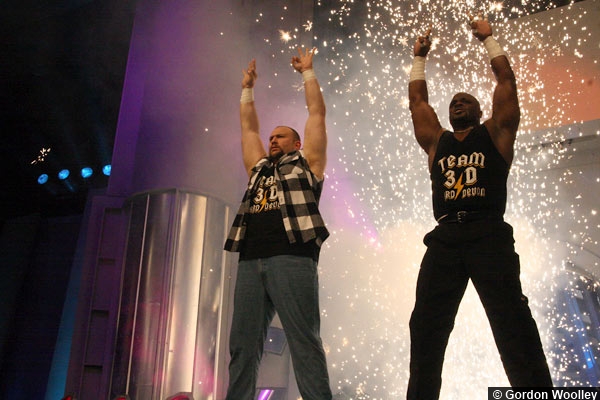 After a nine-year absence from WWE, one of the most decorated tag teams in professional wrestling history may soon be returning to WWE as PWInsider is reporting that The Dudley Boyz (Bubba Ray & D-Von) and WWE are mutually interested in seeing the eighteen-time tag team champions grace a WWE ring yet again. Since being released from WWE in 2005, there is little doubt that the former Bubba Ray Dudley has been the most successful in his post-WWE career as, after a lawsuit filed by the team against WWE ruled that Mark LoMonaco (Bubba Ray Dudley) & Devon Hughes (D-Von Dudley) cannot legally use any form of their WWE ring names outside of the company, The Dudley Boyz became known as Team 3D and, under the ring names of Brother Ray & Brother Devon, the legendary team made their way to TNA.

The first five years of Team 3D’s career in TNA saw them twice win the TNA World Tag Team Titles and win the NWA World Tag Team Titles once before Brother Ray turned on Brother Devon, establishing Brother Ray as a heel. Appropriately changing his ring name to Bully Ray, the 300 pound competitor underwent a complete character change and it paid off big as, for the first time in his lengthy professional wrestling career, Bully Ray was a main event tier star, twice winning the TNA World Heavyweight Title and being the centerpiece for TNA and one of its most intriguing angles, the Aces & Eights angle. At TNA Bound for Glory on October 12, Team 3D was inducted into the TNA Hall of Fame and the reunited team also defeated Abyss & Tommy Dreamer at the event, which was their final contracted date with TNA.

While Devon did not achieve the same level of success as Bully Ray, Devon did become a two-time TNA Television Champion during his time as a singles competitor and also teamed with other TNA stars before being let go by TNA in 2012 as, while still reigning as the TNA Television Champion, Devon’s contract would expire and neither party could agree on a new deal. TNA would end up stripping Devon of the Television Title. However, Devon would return to TNA less than a month later, turning heel and joining the Aces & Eights stable. After the dissolution of the stable, Devon would reunite with Bully Ray and, together, Team 3D were inducted into the TNA Hall of Fame, making a short-term deal with TNA to stay with the company until Bound for Glory, which the team honored before officially departing the company. Currently, Team 3D are gearing up for a feud with Bullet Club in New Japan Pro Wrestling, but once that deal is done, it seems to be a distinct possibility that The Dudley Boyz could re-emerge in WWE in the near future.