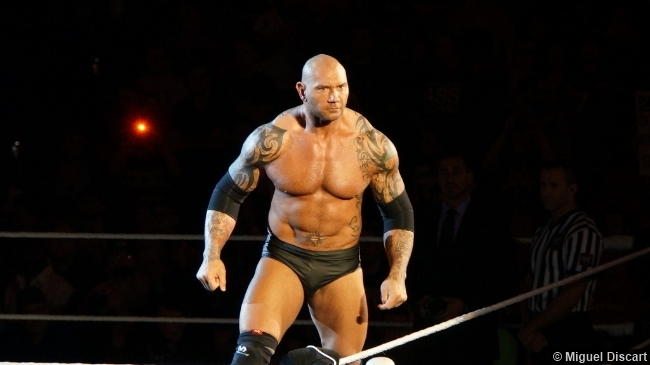 After starring as Drax The Destroyer (alongside Chris Pratt, Zoe Saldana, Bradley Cooper & Vin Diesel) in the highest grossing film of 2014, “Guardians of the Galaxy”, a new acting role is rumored to be on he horizon for Batista as, according to WWE.com, “The Animal” is in the running to star as the villain in the next James Bond movie. The casting call for the role of Hinx calls for a “physically imposing male with a unique look and a sports background”, a description which fits Batista perfectly. If selected for the role in the newest installment of the legendary 007 franchise, Batista would be going head-to-head with Daniel Craig in the, as of now, untitled movie.

To date, Batista has starred or had a role in eight films (five of which were straight-to-DVD releases) as the former WWE Champion first had a cameo role in the 2006 film, “Relative Strangers” and also starred in the straight-to-DVD movies My Son, My Son, What Have Ye Done?, Wrong Side of Town, House of the Rising Sun, & The Scorpion King 3: Battle for Redemption before making his big screen, theatrical debut in 2012’s “The Man With The Iron Fists” as Brass Body. Batista then starred in Riddick (also alongside Vin Diesel) and the aforementioned Guardians of the Galaxy. Batista has also finished filming his role in the film, “L.A. Slasher”, which also stars the likes of Danny Trejo, Eric Roberts, Mischa Barton, Drake Bell, & Brooke Hogan. L.A. Slasher debuted at the Salt Lake Comic Con in September and is expected to be released in theaters in 2015. Batista is also set to star in the upcoming films “Kickboxer” and “Bus 657”, plus there are early talks of a Guardians of the Galaxy sequel and even crossover films with other Marvel properties like The Avengers. Add this to Batista’s WWE schedule and “The Animal” will certainly be busy in the near future and a role in the popular James Bond series would certainly be worth Batista’s time and could arguably be his biggest role to date.

Do you want to see Batista in a Bond movie? Post your comments in the box below.