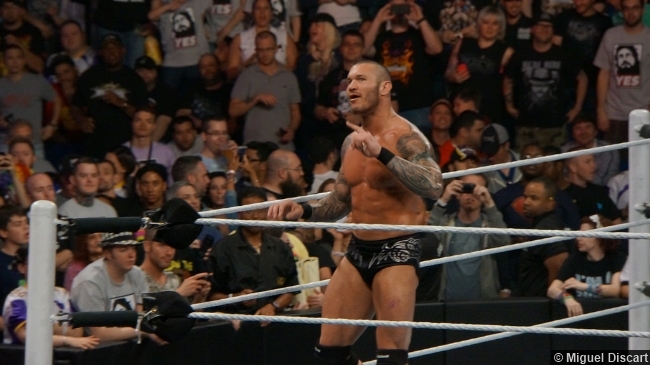 Five nights after Money-in-the-Bank, the 776th edition of WWE Friday Night SmackDown was a special 4th of July episode and it came to you from the Prudential Center in Newark, NJ. For the first time since his much-anticipated return to WWE was ruined, courtesy of an assault from The Wyatt Family, the first Undisputed Champion in WWE history Chris Jericho would return to SmackDown, appearing on the show in over a year! What will “Y2J” have to say about The Wyatt Family’s assault? Will The Wyatt Family be lying in wait for another ambush on the six-time former World Champion?

On a special Independence Day edition of SmackDown, United States Champion Sheamus would hold the first ever 4th of July United States Championship Challenge when Sheamus puts the United States Title on the line against “The Mexican Aristocrat” Alberto Del Rio, who accepted Sheamus’ open challenge this past Tuesday night on WWE Main Event! Plus, for the first time since her shocking return to RAW where she defeated Paige to reclaim the Divas Title, new Divas Champion AJ Lee would face Eva Marie in a non-title match. Also, after Cesaro assaulted Kofi Kingston on RAW, “The King of Swing” would have to contend with Big E on SmackDown as the two Intercontinental Championship Battle Royal competitors square off on Friday night.

For the first time since Dean Ambrose cost him a prime cash-in opportunity on RAW, SmackDown kicks off with the holder of the Money-in-the-Bank briefcase as “Mr. Money-in-the-Bank” Seth Rollins makes his way to the ring. Rollins says that John Cena got “lucky” on RAW, but the “clock is ticking” for the new WWE World Heavyweight Champion, saying that the longer that Cena is champion, the lower his “survival rate” is. Rollins continues, saying that “sooner than later” he will cash in his Money-in-the-Bank contract and become the new WWE World Heavyweight Champion, proclaiming that he will be the new “face of the WWE”. Seth Rollins is then interrupted by Dean Ambrose, who comes out to the stage, telling Rollins that he is “crazy” to think that he will ever get his hands on the WWE World Heavyweight Title because every time that Rollins tries to cash in, he is going to be there to stop him. Ambrose continues, saying that Rollins’ briefcase is a “curse” because it gives him every opportunity to crush Seth Rollins. Rollins says that there is no way that Dean Ambrose can keep thwarting his attempts for an entire year. Dean Ambrose then says that he can and he will, starting right now. Ambrose then rushes the ring, pummeling Seth Rollins, but Randy Orton would enter the fray. However, a corporate beat-down would be pre-empted by Roman Reigns, who makes the save, as Ambrose & Reigns clear the ring of Orton & Rollins. WWE COO Triple H then joins Orton & Rollins on the stage, saying that they have made their point and now he is going to make his. The COO then announces that, tonight, Dean Ambrose will go one-on-one with Randy Orton and, if Roman Reigns interferes in that match, then Reigns will be removed from the Fatal 4-Way Match for the WWE World Heavyweight Championship at Battleground!

The opening match would see gold put on the line as Sheamus would defend the United States Championship against the man who answered the 4th of July United States Championship Challenge of Sheamus, “The Mexican Aristocrat” Alberto Del Rio. At the end of a hard-fought match, it was Alberto Del Rio going for a moonsault, but missing the mark, landing on his feet in perfect position for the Brogue Kick from Sheamus as Sheamus pins Del Rio to pick up the win and successfully retain the United States Title on America’s birthday.

The “inspirational” Bo Dallas was in action on SmackDown as Bo Dallas would go one-on-one with one-half of Los Matadores, Diego, with El Torito in his corner. In the end, it was Bo Dallas hitting the Bo Dog, pinning Diego to pick up the win and remain undefeated. After the match, Bo Dallas would tell El Torito that he could grow taller one day if he just “bo-lieves”, but when Bo turns his back, El Torito would “gore” Dallas. Bo would respond by slamming the mini-bull in the center of the ring.

After his grand return to WWE was ruined by an assault from The Wyatt Family on RAW, “Y2J” Chris Jericho would appear on SmackDown for the first time in a year. Jericho says that it “feels good” to be back in a WWE ring and it “felt good” to make his return on RAW. Jericho continues, saying that a “dark, venomous spider” came along and he knows that The Wyatt Family has taken WWE over while he has been gone and he knew what he was in for on RAW. Jericho then says “thank you” to The Wyatt Family, saying that they reminded him that WWE is about “survival”. Jericho says that he does not look like anyone else and he does not act like anyone else, saying that, if The Wyatt Family wants to get “crazy”, he can get crazy. Jericho is then interrupted by The Wyatt Family, who appears on the Tron, as Bray Wyatt says that he has a “million names”, telling Jericho to “save” himself. Jericho then tells Bray Wyatt to come out of the dark and fight him, but “Y2J” is interrupted by The Miz. The Miz tells Jericho that, on RAW, Jericho “deprived” the fans of a moment that they would never forget, telling Jericho that he was “lucky” that he did not do any damage to Miz’s “money maker”, but as soon as Miz steps foot in the ring, Jericho hits The Miz with the Codebreaker again!

Before they are two of the eleven competitors in the Intercontinental Championship Battle Royal at Battleground, Big E and “The King of Swing” Cesaro, with Paul Heyman in tow, were scheduled to compete on SmackDown. However, the match would not even get underway before a brawl breaks out at ringside with Cesaro using a steel chair on Big E before tossing Big E over the announce table. However, Big E would battle back, tossing Cesaro with a belly-to-back throw on the outside. As referees rush out to break things up, Paul Heyman holds Cesaro back, convincing Cesaro to stop the fight.

After her surprise return on RAW and even more surprising defeat of Paige to regain the Divas Title, new Divas Champion AJ Lee would go one-on-one with Eva Marie in a non-title match with former champion Paige seated at ringside. In the end, it was AJ Lee trapping Eva Marie in the Black Widow, making Eva tap out to pick up the win. After the match, Paige would enter the ring, applauding the new champion and shaking her hand before exiting the ring, letting AJ Lee enjoy her victory.

Dressed in his best Bruce Springsteen attire, Damien Sandow would have to contend with “The Super Athlete” Rusev, with Lana in tow, on SmackDown. Sandow would try to get the jump on Rusev, but Rusev would easily dispose of Sandow, tossing Sandow out of the ring. After Lana runs down America, Rusev & Lana are interrupted by the arrival of Jack Swagger & Zeb Colter as Colter says that he hates “ungrateful illegal immigrants”. Zeb then quizzes Lana, asking who invented the internet and who invented the automobile, saying that neither of those things came from Russia. Lana then tells Colter to “shut up” and Jack Swagger enters the ring, ready for a fight. Colter then tells Lana to “shut up” before saying that they are out there to get something straight. Zeb then asks the fans in attendance to stand and proclaim “we the people”, which the fans say along with Colter & Swagger. Having been embarrassed by the two patriots, Rusev & Lana back off, leaving the ring.

With “Mr. Money-in-the-Bank” Seth Rollins a guest on commentary, it was then time for the main event as “The Lunatic Fringe” Dean Ambrose would go one-on-one with one of the three challengers in the Fatal 4-Way Match for the WWE World Heavyweight Title at Battleground, “The Viper” Randy Orton, and, per the orders of WWE COO Triple H, if Roman Reigns interferes in the match, he will be removed from the Fatal 4-Way Match at Battleground. During the match, Dean Ambrose would have Randy Orton down and he would take the opportunity to attack Seth Rollins, pummeling “Mr. Money-in-the-Bank”, leaving Rollins laid out at ringside. Shortly after this, Dean Ambrose would go for a dive to Randy Orton on the outside, but Seth Rollins would catch Ambrose with a briefcase shot to Ambrose’s injured shoulder, bringing an end to the match. In the ring, Orton and Rollins would try to further injure Ambrose, but Roman Reigns would make the save, dropping Randy Orton with the Superman Punch! However, with the aid of Seth Rollins, Randy Orton would escape the attack as Orton & Rollins retreat up the ramp as Reigns & Ambrose stand tall in the ring.