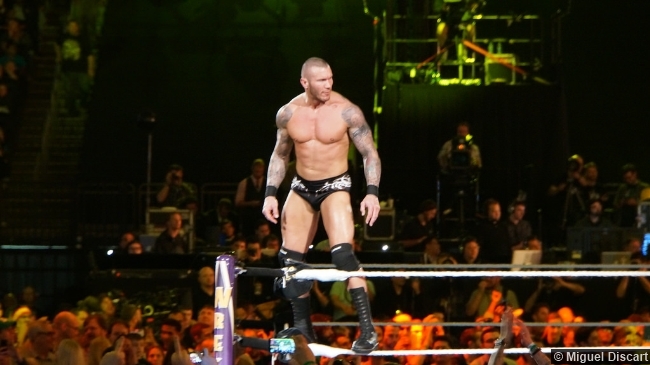 Striking with a Purpose.

Nine nights before Battleground, the 777th edition of WWE Friday Night SmackDown came to you from the Canadian Tire Centre in Ottawa, Ontario, Canada. Before he joins Kane, Roman Reigns, and WWE World Heavyweight Champion John Cena in a Fatal 4-Way Match for the WWE World Heavyweight Title at Battleground, Randy Orton was in action on SmackDown as “The Viper” would go one-on-one with an old rival in “Y2J” Chris Jericho!

In a much-anticipated collision, two of WWE’s most dominant Superstars would go head-to-head on SmackDown as the intense and dominant Roman Reigns would go one-on-one with the undefeated “Hero of the Russian Federation” Rusev! With Roman Reigns looking to build momentum for the Fatal 4-Way Match at Battleground, will the hard-hitting Reigns be able to put a blemish on the record of “The Super Athlete” or will Rusev prove to be a major roadblock on Roman’s road to Battleground?

Before he goes one-on-one with Roman Reigns in the main event, SmackDown kicks off with “The Super Athlete” Rusev and Lana. Lana says that, tonight, Roman Reigns’ “inferiority” will be exposed, saying that Reigns is “not worthy” of sharing the ring with Rusev. Lana is then interrupted by the arrival of Roman Reigns, who makes his way through the crowd to the ring. Reigns tells Rusev that he is going to get straight to the point, asking Rusev if he thinks that he can beat him tonight. Reigns then tells Rusev that he has a “hair trigger” and, if Rusev makes a move, he will put a fist right in Rusev’s face. Lana then tells Roman to “be careful” and Reigns tells Lana that he assesses and “attacks”, saying that all they need is a referee to get this fight started. A referee then comes to the ring, holding Rusev and Reigns apart as Lana says that Rusev is not going to fight on Roman’s terms. Lana then leads Rusev out of the ring, but Rusev never takes his eyes off of Roman Reigns.

After the physical implosion of The Funkadactyls on RAW, Cameron would go one-on-one with Divas Champion AJ Lee in a non-title match on SmackDown. During the match, Cameron would try to walk out on the match, but Naomi would come out, tossing Cameron back into the ring. AJ Lee would then hit the Shining Wizard on Cameron, pinning Cameron for the win.

With a dilemma on his mind on whether to pick his current girlfriend Layla or his ex-girlfriend Summer Rae, Fandango, with Layla in his corner, would go one-on-one with Adam Rose, with Summer Rae in his corner. It would not take long for a fight to break out at ringside between Layla and Summer Rae as Fandango leaves the ring to try and separate his current girlfriend and ex-girlfriend, even getting hit himself. This would lead to Fandango getting counted out as Summer Rae walks away from ringside, proud of her actions. Fandango then tries to ambush Adam Rose, but Adam Rose fights back, hitting the Party Foul on Fandango.

The unusual new team of Heath Slater & Titus O’Neil would be looking to make an impact on SmackDown as Slater & Titus faced WWE Tag Team Champions The Usos in a non-title match. In the end, it was The Usos picking up the win as one of The Usos land the Superfly Splash on Heath Slater, pinning Slater for the win.

Nine nights before he joins Kane, Roman Reigns, and WWE World Heavyweight Champion John Cena in a Fatal 4-Way Match for the WWE World Heavyweight Championship at Battleground, “The Viper” Randy Orton would go one-on-one with the man who will go one-on-one with Bray Wyatt at Battleground, “Y2J” Chris Jericho. Throughout the match, both Randy Orton and Chris Jericho would take each other to the limit, but in the end, it was a brief distraction from Bray Wyatt that would allow Orton to take advantage, striking with the RKO en route to picking up the win.

In an impromptu match made following the brawl earlier in the night, Fandango would serve as the Special Referee in a match between his current girlfriend, Layla, and his ex-girlfriend, Summer Rae. During the match, Fandango would stop Layla and Summer Rae from fighting only to start dancing. Layla and Summer would then both stare at Fandango, having an apparent epiphany about the dancing Superstar before they both attack Fandango! Fandango then scrambles out of the ring as Layla and Summer Rae stare each other down before having a brief dance-off and actually dancing with each other, apparently burying the hatchet.

In the continuation of the rivalry between Goldust & Stardust and RybAxel, Goldust, with Stardust in his corner, would go one-on-one with Curtis Axel, with Ryback in his corner. In the end, it was Goldust hitting the Curtain Call on Curtis Axel en route to picking up the win. After the match, Ryback would ambush Goldust, but Stardust would enter the ring, blowing stardust particles into the face of Ryback.

Then it was time for the hard-hitting main event as, for the first time ever, Roman Reigns would collide with “The Hero of the Russian Federation” Rusev, with Lana in his corner. During the match, Roman Reigns was about to deliver the Spear to Rusev when Randy Orton comes out, hanging Roman up on the top rope. After the match, Rusev would attack Roman from behind, but Roman would dodge Rusev and knock Orton off of the apron with the Superman Punch! However, this would give Rusev an opening to level Reigns with a huge side kick, but Lana would call off the attack at this point, instructing Rusev to exit the ring. After Rusev & Lana exit the ring, Randy Orton methodically enters the ring, picking Roman Reigns up and hitting Reigns with the RKO in the middle of the ring before “The Viper” looms over the fallen Roman.