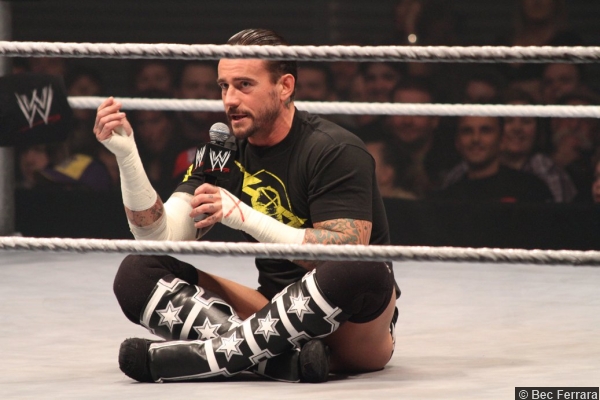 After months of rumors and speculation about the status of CM Punk, the conversation can finally be put to rest as WWE.com has moved CM Punk’s Superstar profile to the Alumni section of WWE.com, signifying CM Punk’s official departure from the company. The sixth longest reigning WWE Champion of all time has not appeared since the Royal Rumble in January and, the night after the Royal Rumble, CM Punk reportedly told Vince McMahon that he was “going home”. Punk did just that and WWE promptly removed CM Punk from advertising for future events. After “taking his ball and going home”, reports began to surface suggesting that CM Punk may have suffered a concussion at the Royal Rumble or that Punk’s departure may have been due to his frustrations with the creative team. Supposedly, the straightedge Superstar had a problem with WWE booking Batista to win the WWE World Heavyweight Title at WrestleMania which, at the time, was WWE’s plan. Punk had an issue with WWE booking part-timers like Batista and The Rock over guys like Punk who worked a full schedule for WWE. Other reports suggested that CM Punk’s departure came as a result of the WWE Network, which would greatly reduce the paychecks of WWE’s Superstars and Divas.

No matter the reason, CM Punk moved on with his life, eventually returning to Twitter to discuss his hometown Chicago Blackhawks and would also get wed to his fiancee, AJ Lee, in June. In May, CM Punk was interviewed and asked about being retired at the age of 35 and was quoted as saying that it “felt good”, commenting on some of the charity work he has been doing alongside the Chicago Cubs. Punk eluded to his departure on Twitter yesterday, saying, “Nope, thank YOU. Thanks for all the help and support through the years. Health and happiness above all.Don’t ever take any s*** from anybody.”

During his nine-year career in WWE, CM Punk was a five-time World Champion, having held the WWE Championship twice (with his second reign being the sixth longest reign of all-time at 434 days) and the World Heavyweight Championship three times. Punk is also a one-time ECW Champion, a one-time Intercontinental Champion, a one-time World Tag Team Champion (with Kofi Kingston), and is the first Superstar in WWE history to win back-to-back Money-in-the-Bank Ladder Matches, having won in 2008 and 2009. Punk is also the nineteenth WWE Triple Crown Champion in history, having won the WWE, Intercontinental, and World Tag Team Championship in his career.

What was your favorite CM Punk moment? Post your comments in the box below.