This week’s edition of NXT demonstrated what being a gentleman gets you in professional wrestling. The main event of the evening harked back to the events of the previous week’s episode, where Tyson Kidd and Justin Gabriel proceeded to beat on Sami Zayn following his victory over the Cape Town Werewolf. The NXT Champion Adrian Neville made the save, but the final survivor of the Hart Dungeon seemingly had found a compatriot in his turn to the dark side. The tag team contest between these four men would make a highly-anticipated main event that would not disappoint.

Also on this episode, Summer Rae and Bayley compete for the opportunity to battle Charlotte for the NXT Women’s Championship, CJ Parker and Xavier Woods continue their budding feud, and a superstar from the main roster flies in to entertain the crowd at the Full Sail University. So, without further ado, let’s get to the action.

Both of these ladies have had issues recently with Charlotte and her BFF Sasha Banks. Bayley is a long-term target of the catty remarks and attacks of these two, and has grown an affinity with the NXT audience due to her childlike innocence that gives way to emphatic strength in the ring. Summer, a founding member of the BFFs, was absent for months due to filming the Marine 4. In this time she lost her place in the group, and her forceful attempts to reassert her place only succeeded in alienating her further. Thus, both women had a burning desire to knock Charlotte off her pedestal.

Bayley starts the match in control, with Summer frustrated by the amount of support her opponent is receiving from the NXT audience. A clever spot where Bayley body surfs on top of Summer is so popular that the crowd chant “one more time”, which she happily obliges. Summer is able to regain control with a swift kick to the head as Bayley attempts to return to the ring, and puts her long and dangerous legs to good use in keeping her opponent on the mat. These two demonstrate excellent chemistry with each other, boding well for Bayley’s chances of making the main roster in the future.  Bayley emphatic counter of an intended spin kick sees Summer land flat on her face, and the crowd start chanting “Bayley’s gonna hug you!”, in reference to her signature Hug-plex. She puts up a strong offence, but Summer is able to counter the finisher, and instead connect with the Summer Crush, and pick up the 1-2-3.

This was a well-worked match in spite of the final pinfall that was somewhat botched, and given more time these two certainly have the chemistry to have an even more exciting match. Bayley will be a worthy and popular champion if she is ever afforded a chance with the belt. But for now Summer gets an opportunity to take the belt from her former comrade Charlotte, which should prove to be an enticing and nasty encounter. Not only is the title on the line, but could the allegiance of Sasha Banks also be up for grabs? 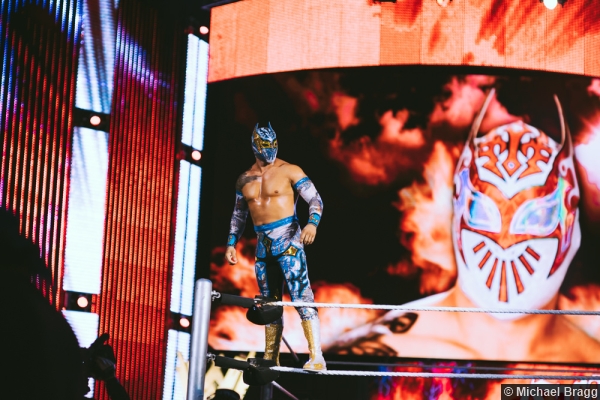 Sin Cara joins NXT for one night only to entertain the crowd with his high-flying antics. His opponent is Wesley Blake, a recent acquisition on the roster. No prizes for guessing how this match turned out. A short match sees Cara hit a number of his flashier moves and diving around the arena, whilst Blake demonstrates a few impact moves, mainly focusing on the arm of his experienced opponent. However, Sin Cara picks up the victory with a kick to Blake’s head from the apron followed by the Falling Star senton bomb to make his visit to Full Sail University a victorious one. Not a great exposition of either Cara’s ability or Blake’s potential due to the shortness of the bout, so it can really only be classed as filler.

The repackaging of CJ Parker as a preachy eco-warrior looks to be heading in the right direction, following his victory over Steve Cutler last week, he berated the minimal impact Xavier Woods has had since his debut on WWE main programming. This would seem petty, if it hadn’t hit so close to the mark. However, when Parker came out to the ring this week, he immediately appeared to show regret for what he said about Woods, and invited the target of his barbed tongue to come to the ring so they could clear the air (appropriate action for an environmentalist). He blames his spiteful words on adrenaline following a winning return, and apologises for what was said. Woods, soon to be Dr. Woods, admonished him for behaving like a child.

Parker follows this with a threatening tone, demanding that Woods accepts his apology, displaying the peace symbol. Woods belatedly returns the favour, albeit right in the face of Parker, and as he turns to leave, he is unsurprisingly blind-sided with a high kick to the back of the head. Parker then grabs his adversary’s afro, stating that he didn’t want it to be like this, before he can continue his assault, officials from the back convince the environmentalist to back-off. Only having one kick does lessen the intensity of this moment, as Parker could have displayed more viciousness due to his obvious contempt for Woods. However, this feud is an effective way to re-establish Parker and will hopefully also put some wind back into Woods’ sails following a disappointing stint on the main roster.

Lance Storm in a recent interview described NXT as one of the best hour’s worth of wrestling on the weekly schedule, due to having a mix of competitive matches and short squashes. This contest certainly fits into the latter category. When Bull Dempsey made his debut two weeks ago in a winning effort against Xavier Woods, the announcing team heavily hyped his arrival as the emergence of the next big thing in NXT. Promoted as the last of a dying breed of old school brawlers, Dempsey looked to continue his early momentum with a victory over Angelo Dawkins.

Dempsey and Dawkins begin with some technical but assertive wrestling. That spot where Dempsey turns an opponent’s arm-drag into a headlock is only a small detail, but it looks really impressive. An attempted sunset flip by Dawkins is countered by Dempsey dropping his entire bodyweight on his opponent’s chest. This leads to a series of punches, headbutts, elbows and other means of beating on Dawkins. Dempsey behaves like a brawler, and this style of beating rivals to a pulp will get over quickly. A late flurry of offence by Dawkins are stopped by an elbow, a splash in the corner and his signature jumping scoop slam gives a victory to Dempsey. Following the win, Dempsey cuts a short promo about being a wrecking ball, and that he is looking to become NXT Champion. Adrian Neville and the rest of the NXT roster have been put on notice.

With these four superstars, the main event was unlikely to be a disappointment, with Kidd’s slow heel turn having brought Gabriel along with him, the pair had drawn the ire of two of the biggest names in NXT in the form of Zayn and the NXT Champion Neville. Kidd was accompanied to the ring by his wife Natalya. Of course, this is necessary to aptly demonstrate a heel turn for Kidd in the manner his relationship with Natalya changes. However, she currently is far more popular than her husband, and the chants for her during the match seemed to take away from the action in the ring somewhat. Nevertheless, with the talent in this tag-team affair, the audience live and at home were unlikely to be left disappointed.

Kidd and Neville start in the ring, with Neville taking control by attacking the left arm of Kidd, and quick tags between the champion and Zayn keep the pressure on the Canadian. Kidd eventually escapes the punishment to tag in Gabriel, but all that rewards the South African with is a fantastic spot where Neville hits a corkscrew moonsault from standing on Zayn’s back. Neville’s athleticism is again on show with a handspring into a diving crossbody onto Kidd, displaying why the Brit is touted for a big future. Zayn soon finds himself trapped in the opposing corner, and while his is able to fight both opponents, Kidd throws him over the top rope to give his team the advantage heading to the break.

Back to the action, Kidd and Gabriel show the team work that made them an entertaining team a couple of years ago in WWE. However, Zayn quickly capitalises on a mistake from Gabriel to tag in Neville, who picks up the pace with a flurry of kicks. The action picks up as Neville hits a number of high impact shots on both Gabriel and Kidd with a number of near falls. Neville sets Kidd up for the Red Arrow, but a distraction from Gabriel is enough to turn the tide, with a springboard elbow bringing another close call. A blind tag brings in Zayn, and whilst Neville flies to the outside to deal with Gabriel, Zayn hits a crossbody on Kidd, and cue the obligatory “This is Awesome” chants. Kidd rakes the eyes of Zayn, but he is thrown over the top allowing for Zayn to fly over the top rope on the other three competitors in this match.

As Kidd is thrown back into the ring, he clutches at his knee, seemingly injured, and Natalya jumps on the apron to convince Zayn to back off and check on her husband’s well-being.  Kidd attempts to cheap shot Zayn in this distraction, but it is blocked and he knocks Kidd against the ropes, inadvertently causing Natalya to fall of the apron hard. Both Kidd and Zayn look at each other shocked, and seem to call a temporary truce so they can ensure Natalya is okay. As Zayn steps through the ropes, Kidd rolls him up for the pin and takes the victory for his team. Another dastardly action by Kidd, this time winning due to Zayn’s chivalrous nature, forgoing his wife’s safety in order to push himself closer to another shot as Neville’s championship. We’ll have to wait until next week to see how this develops, but it looks like Kidd’s career rejuvenation at NXT is far from over.