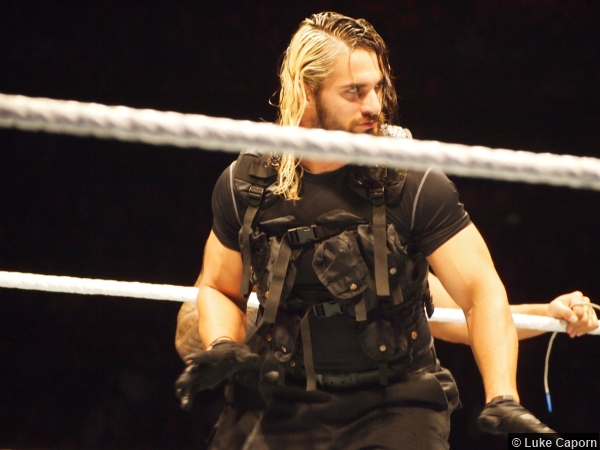 The Devil You Used To Know.

After some assistance from John Cena led them to a 6-Man Tag victory over The Wyatt Family on RAW, the remnants of The Shield would kick off SmackDown as Dean Ambrose & Roman Reigns make their way to the ring. Dean Ambrose says that it’s clear what The Authority is trying to do, but they will not let Triple H get what he wants. Ambrose then says that he is going to “shut down the Seth Rollins business” for good before handing the microphone off to Roman Reigns. Roman says that Randy Orton should enjoy his night off because, when Orton comes back, he is going to send “The Viper” on a “permanent vacation”. Reigns then says that Orton is just a “spoiled little kid” who gets whatever he wants from his “daddy”, Triple H, and Orton was just handed a spot in the WWE World Heavyweight Championship Ladder Match just like he has been handed everything else in his career. Reigns continues, saying that everybody wants to be the champion, but maybe he or Dean Ambrose will beat Orton to it! WWE COO Triple H then appears on the Tron, revealing that he only has one spot left to fill in the WWE World Heavyweight Championship Ladder Match, but there are two Shield members. Triple H then says that there is only one “fair” way to decide which one of them gets to be in the match before the COO flips a coin, announcing that Dean Ambrose will be given the chance to qualify for the title match here tonight, despite “The Game” not revealing who had heads and who had tails. The COO then reveals that Ambrose’s opponent will be none other than Bray Wyatt before informing Roman Reigns that he will be banned from ringside for the match, as well as the rest of The Wyatt Family! Triple H then tells Dean Ambrose that he is banned from ringside for Roman Reigns’ match that is going to take place right now as Reigns will go one-on-one with Intercontinental Champion Bad News Barrett.

Per the orders of WWE COO Triple H, the opening match of the night would see The Shield’s Roman Reigns going one-on-one with Intercontinental Champion Bad News Barrett in a non-title match with Dean Ambrose banned from ringside for the match. During the match, Roman Reigns was poised to deliver the Spear to Bad News Barrett, but 3MB would inexplicably make their way to the ring as Heath Slater, Jinder Mahal, & Drew McIntyre beat down Roman Reigns in the ring. However, Reigns would battle back, tossing all three members of 3MB to the outside. On the outside, Roman Reigns would toss Jinder Mahal over the announce table before blasting Drew McIntyre with a Spear on the floor, followed by a Spear in mid-air to Heath Slater! Roman Reigns then stands tall in the ring, having single-handedly dismantled 3MB.

After Jimmy Uso defeated Luke Harper on Main Event, Jimmy’s brother, Jey, would be looking for the same success as WWE Tag Team Champion Jey Uso, with Jimmy Uso in his corner, would face The Wyatt Family’s Erick Rowan, with Luke Harper in his corner. At the end of a quick match, it was Erick Rowan hitting a modified sidewalk slam on Jey Uso, pinning Jey to pick up the win.

The self-proclaimed “inspirational” Bo Dallas was in action on SmackDown, going one-on-one with R-Truth. In the end, it was Bo Dallas hitting the Bo Dog on R-Truth, pinning Truth for the win.

Three weeks before they join Alberto Del Rio, Randy Orton, and either Dean Ambrose or Bray Wyatt in the WWE World Heavyweight Championship Ladder Match at Money-in-the-Bank, familiar rivals would collide as United States Champion Sheamus would go one-on-one with “The King of Swing” Cesaro, with Paul Heyman in his corner, in a non-title match. During the match, Sheamus would size Cesaro up for the Brogue Kick, but a timely distraction from Paul Heyman would work to the advantage of Cesaro and, when Sheamus goes for White Noise on Cesaro, Cesaro counters the move into a small package, scoring the three-count to pick up the win.

Two of WWE’s most unusual Superstars would square off on SmackDown as the “King Rosebud”, Adam Rose, went one-on-one with Fandango, with Layla in his corner. In the end, it was Adam Rose hitting the Party Foul on Fandango, pinning Fandango for the win. After the match, Adam Rose would dance his way to the back with his “Rosebuds”, but one “rosebud” would stay behind and the turkey would reveal itself to be Summer Rae as Summer attacks Layla. The two Divas then brawl in the ring before Fandango is finally able to pull Layla out of the ring, away from Summer Rae.

Big E was in action on SmackDown as the powerhouse would go one-on-one with Jack Swagger, with Zeb Colter in his corner. During the match, Rusev’s social ambassador, Lana, would come out to the stage, distracting Big E long enough for Jack Swagger to take advantage with a big boot. However, Zeb Colter would take exception to the foreigner’s presence, shouting at Lana that they do not need her help and telling “The Ravishing Russian” to leave and an angry Lana storms off, but Jack Swagger would have his sights set on the proceedings on the outside. This distraction would cost Swagger the match as Big E hits the Big Ending on Swagger en route to picking up the win.

After being attacked by the crazy Alicia Fox, Aksana would be looking for revenge as “The Lithuanian Diva” went one-on-one with Alicia Fox on SmackDown. In the end, it was Alicia Fox using her legs to plant Aksana face-first into the mat, pinning Aksana for the win.

Then it was time for the main event as The Shield’s Dean Ambrose would go one-on-one with the leader of The Wyatt Family, Bray Wyatt, in a Money-in-the-Bank Qualifying Match as the winner will join Cesaro, Randy Orton, Sheamus, & Alberto Del Rio in the WWE World Heavyweight Championship Ladder Match at Money-in-the-Bank and, per the orders of Triple H, both Roman Reigns and Luke Harper & Erick Rowan would be banned from ringside. During the match, Dean Ambrose would hit Dirty Deeds on Bray Wyatt, but before Ambrose could capitalize, Ambrose is distracted by the presence of Seth Rollins on the announce table. Ambrose would then take the bait, jumping out of the ring and chasing after Rollins, who would intentionally slide in and out of the ring. Then, when Ambrose slid back into the ring, he was caught by Bray Wyatt, who hits the Sister Abigail on Ambrose, pinning Ambrose for the win to qualify for the WWE World Heavyweight Championship Ladder Match at Money-in-the-Bank!