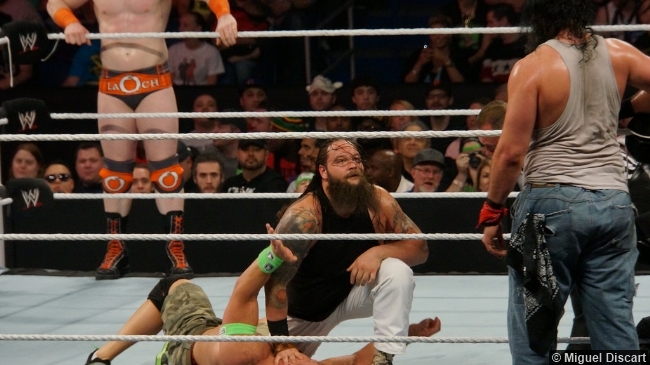 The 1095th edition of WWE Monday Night RAW came to you from the O2 London in London, England. As RAW goes “across the pond”, all eyes will be on The Authority as, with Daniel Bryan out of action for an undetermined amount of time following successful neck surgery this past Thursday, the decision will remain with WWE COO Triple H & WWE Principal Owner Stephanie McMahon as The Authority will announce the state of the WWE World Heavyweight Championship on RAW! Will The Authority do what they have likely dreamed of doing for the last month and strip Daniel Bryan of the WWE World Heavyweight Title or will The Authority allow Daniel Bryan’s reign as champion to continue?

The fate of the WWE World Heavyweight Championship is far from being the only thing on the mind of WWE COO Triple H after The Shield laid waste to Evolution’s backup on last week’s RAW. With The Shield and Evolution set to collide in a rematch from Extreme Rules in two weeks at Payback, will Evolution manage to get one over on The Shield or will the young lions continue to trump the veterans?

For the last four months, John Cena has been the target of The Wyatt Family as Bray Wyatt has continued his efforts to try and expose Cena as a “monster” with his creepy sermons and even creepier match performances. At WrestleMania, it was John Cena standing tall over Bray Wyatt and, at Extreme Rules, Bray Wyatt used Luke Harper, Erick Rowan, and a creepy singing child dubbed, “Little Johnny”, to defeat John Cena in a Steel Cage Match, but this battle between the fourteen-time World Champion and the self-proclaimed “Eater of Worlds” will finally culminate in two weeks at Payback when John Cena faces Bray Wyatt in a Last Man Standing Match, where the only way to win is to incapacitate your opponent to the point that they are unable to answer the referee’s ten-count! John Cena is a veteran of Last Man Standing Matches while Bray Wyatt will enter his very first, but with Luke Harper & Erick Rowan waiting in the wings as well as Bray’s arsenal of bizarre tricks, who truly has the advantage in this brutal match?

RAW kicks off with The Wyatt Family in the ring as Bray Wyatt sings “He’s got the Whole World in his Hands”, with the London crowd singing along. Bray then says that, in our “dreams”, we can fix anything and we dream of “payback”. Bray continues, saying that we wake up and realize that we are not superheroes and we cannot fix anything. Bray says that he used to have a teacher who would go to any length to tell him that he would never amount to anything, saying that the teacher believed everything she read in a book and said that everything Bray believed in was a lie. Bray continues, saying that he asked his teacher what makes her think that she is so much better and what makes her feed children “propaganda”, saying that his teacher responded by calling Bray “rotten” and “evil”. Bray says that he is happy knowing that the teacher is now rotting somewhere in a retirement home, filled with her life’s regrets while he stands there as a “revolutionary” and as the “man of 1,000 truths”, saying he’s got the “whole damn world” in his hands. The London crowd then sings the demonic song before Bray says that he is evil because he is a “necessary evil” that must exist to keep balance in the world. Bray continues, saying that John Cena plays the role of “hero” while the world around him burns, vowing that the “fairy tale” will end at Payback as he will be the “last man standing”. Bray then says that Luke Harper will put Cena down tonight before The Wyatt Family is interrupted by the music of John Cena. Bray immediately sends Luke Harper & Erick Rowan to meet Cena outside the ring, but Cena would slide into the ring behind Bray Wyatt. Cena then hits the Attitude Adjustment on Bray Wyatt, making a quick escape before Harper & Rowan could get their hands on Cena.

The opening match of the night would be a collision of international stars as United States Champion Sheamus would go one-on-one with “The King of Swing” Cesaro, with Paul Heyman in his corner, in a non-title match. During the match, a timely distraction from Paul Heyman would allow Cesaro to take advantage, hitting a German suplex on Sheamus, bridging the suplex into a pin to pick up the win. After the match, Sheamus would offer his hand to Cesaro, but Cesaro would refuse, walking right past Sheamus.

The first in a series of Beat The Clock Challenges would take place on RAW with Big E squaring off with Ryback, with Curtis Axel in his corner, as the two powerhouses would compete in a one-on-one match to set the time to beat with the eventual winner becoming the new #1 Contender for Bad News Barrett’s Intercontinental Title at Payback. In the end, Big E would knock Curtis Axel off of the ring apron before hitting the Big Ending on Ryback, pinning Ryback to set the time to beat at 5:02.

In the second Beat The Clock Challenge match of the night, “Mr. Monday Night” Rob Van Dam would go one-on-one with Alberto Del Rio and, whoever beats Big E’s time of 5:02, will come one step closer to becoming the new #1 Contender for the Intercontinental Title! In the end, it was Rob Van Dam surprising Del Rio with a roll-up, scoring the pinfall and win to establish a new time to beat of 4:15.

With The Shield and Evolution set to collide at Payback in what will now be a No Holds Barred, 6-Man Elimination Tag Match, The Shield’s Seth Rollins would go one-on-one with Evolution’s Batista and, per the orders of Triple H, only “official personnel” would be allowed at ringside. The plan behind this decree would become apparent before the match gets underway as Triple H is introduces as the special guest ring announcer for the match! Triple H says that, as the COO, it is his job to make matches as big as possible. The COO then introduces the special guest timekeeper, Randy Orton, as both Evolution members make their way to ringside before Triple H introduces “The Animal” Batista. Before the match begins, Seth Rollins grabs a microphone and says that he has some “special guests” of his own to make the match as big as possible. Rollins then introduces the two guest commentators, Dean Ambrose & Roman Reigns! As Ambrose & Reigns make their way through the crowd, Evolution is livid at being outsmarted by The Shield. Randy Orton then rings the bell to start the match before Orton and Triple H stand at ringside while Dean Ambrose & Roman Reigns join in on commentary. During the match, Randy Orton would trip up Seth Rollins and this would bring Dean Ambrose & Roman Reigns off of commentary. Shortly after this, Orton distracts the referee while Triple H knocks Seth Rollins off of the top rope. Having seen enough, Ambrose & Reigns jump on Orton & Triple H, but the veterans quickly regain the advantage as Orton tosses Dean Ambrose over the German announce table. Roman Reigns would briefly get his hands on Randy Orton, but Orton would grab a steel chair, jabbing Reigns in the mid-section and on the back before Ambrose runs across both announce tables and dives into the crowd onto Randy Orton! Triple H then picks up the scraps of Dean Ambrose, sending Ambrose into the steel ring post. Seth Rollins then goes for a dive to the outside, but he is caught with a right hand from Triple H, followed up with a Spear from Batista. Triple H then tries to hit the Pedigree on Dean Ambrose, but Ambrose drops Triple H on the announce table. Meanwhile, in the ring, Reigns blasts Batista with the Spear, but before The Shield could administer their three-man powerbomb to Batista, Triple H & Randy Orton run interference, allowing “The Animal” to escape while The Shield stands tall in the ring.

In a rematch from last week’s RAW, the Divas Champion would return home as England’s own Paige would go one-on-one with Alicia Fox in a non-title match. During the match, Paige would find herself caught up on the second turnbuckle and a kick to the face from Alicia Fox would lead to a surprising victory for Alicia Fox. However, Alicia Fox’s celebration would be just as destructive as her reaction to losing as Alicia tears up the ringside area before walking off with Jerry Lawler’s crown.

In the final Beat The Clock match, “The World’s Strongest Man” Mark Henry would square off with “The Show-Off” Dolph Ziggler and, if either man can win the match in less than 4:15, then they will become the new #1 Contender for the Intercontinental Title with a match against champion Bad News Barrett at Payback, but if they fail to beat the clock, then Rob Van Dam will get the title shot. In the end, Dolph Ziggler would continue to survive the onslaught of Mark Henry, managing to hit the Zig Zag, but Ziggler would not be able to pin Mark Henry before time expires. As a result, Rob Van Dam beats the clock and will challenge Bad News Barrett for the Intercontinental Title. While RVD celebrates his victory on the stage, Bad News Barrett would emerge, flooring RVD with the Bull Hammer Elbow to the back of the head!

With Renee Young in the ring, the unique and fun-loving Adam Rose would lead his eclectic group of “rosebuds” into the ring. Adam Rose would hijack the interview and show off his giant bunny’s dance moves for Renee before the good time is interrupted by Jack Swagger, who is led to the ring by Zeb Colter. Swagger & Colter enter the ring as Zeb tells Adam Rose fits in a lot more with the English than he does in America. Colter says that he could catch anything from Adam Rose and his “rosebuds” and Zeb says that he does not take embarrassment lightly, proposing that they settle it man-to-man in the ring. However, Jack Swagger would deliver a cheap shot to Adam Rose, but Swagger would take too much time trying to intimidate Adam Rose’s “rosebuds” and Adam Rose would fire back, pummeling Swagger before Swagger is able to slip away while Adam Rose and the rosebuds party in the ring.